Tell 60 Minutes that Bethlehem is not "completely surrounded"

CBS's flagship news magazine, 60 Minutes, got it wrong when it claimed an Israeli wall encircles the entire city of Bethlehem. In an April 22, 2012 segment entitled "Christians of the Holy Land," 60 Minutes host Bob Simon claimed, "The wall completely surrounds Bethlehem, turning the little town where Christ was born into what its residents call an open air prison." This is simply not true. But more than a year has passed and 60 Minutes has not corrected the record about this and other errors that appeared in the segment.

Staffers at the network know about the errors. CBS News has been contacted by thousands of people about the problems with the segment; a full page ad in the Wall Street Journal drew attention to the errors; and the need for a correction has been raised at CBS shareholders' meetings. But Jeff Fager, chairman of CBS News and executive producer for 60 Minutes, has refused to correct the record. In fact, even after he knew of the challenges to the segment's accuracy, Fager repeated the errors before his fellow congregants at St. Mark's Episcopal Church in New Canaan in April 2013. He told his fellow congregants that Bethlehem is surrounded by a wall. It is not.

It is time for 60 Minutes to broadcast full and forthright corrections of the errors made. You can help by sending a map of the security barrier to Jeff Fager and insisting that CBS abide by its stated commitments to journalistic ethics.

After CBS News Chairman Jeffrey Fager disregarded detailed, substantive information presented to him and defended the distorted segment, CAMERA on August 14, 2012 published the following advertisement in the Wall Street Journal: 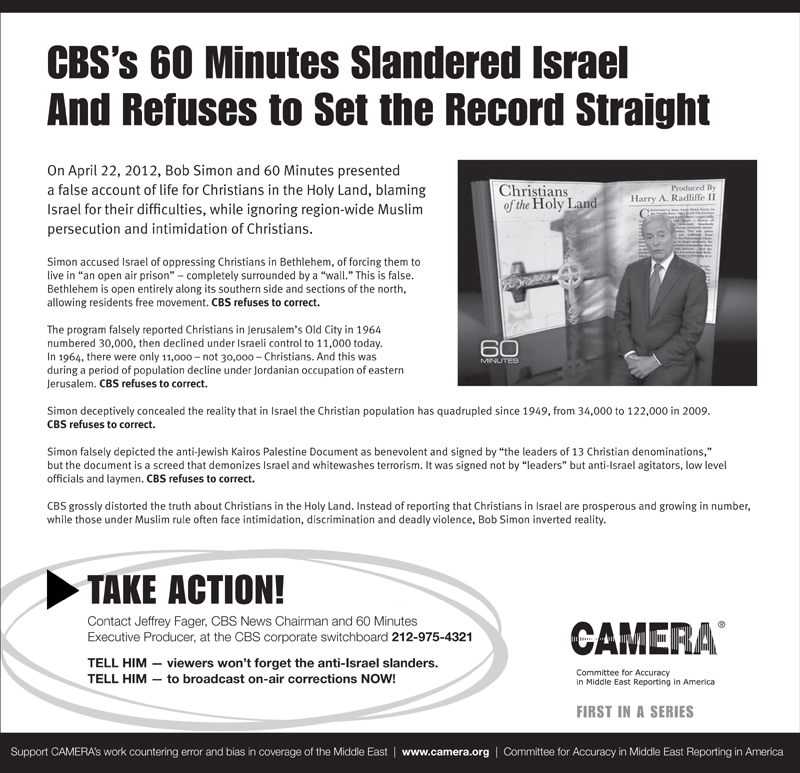 Map of barrier route near Bethlehem by United Nations Office for the Coordination of Humanitarian Affairs (December 2012). Click on the image to open a large pdf map.

Map of barrier route near Bethlehem by B'tselem (June 2012). Click on the image to open a large pdf map.

CBS News Chairman Jeff Fager Stonewalling Like Nixon
CAMERA describes CBS and Jeff Fager's efforts to stonewall in the face of serious criticism and challenges to the accuracy of the 60 Minutes segment.

CAMERA Analyst Makes $5,000 challenge to CBS News Chairman Jeff Fager
During the question and answer period after a presentation by Jeff Fager at his church in Connecticut, Fager faced a challenge from the audience: If he could prove the security fence completely surrounds Bethlehem, as he had just told the audience, the questioner, a CAMERA analyst, would donate $5,000 to a charity of his choosing.

Shareholders Demand Answers From CBS On Holy Land Christian Story
Four board members of the Committee for Accuracy in Middle East Reporting in America (CAMERA) attended the CBS May 24 shareholder meeting in New York, arguing that the television network had used distortions, omissions and factual errors on “60 Minutes” to present the Jewish state as an oppressor of Christians in the region.

60 Minutes: At War With The Truth
60 Minutes has failed to issue a correction, either during its Sunday broadcast or on its website – contrary to CBS’s corporate policy which states that “significant errors of fact must be corrected clearly and promptly in the broadcast or on the web page of the program in which the error was made…”