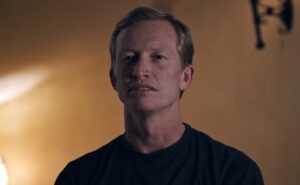 Filmmaker Todd Morehead documents troubling hostility toward Jews and Israel on the part of Palestinians in the West Bank in man-on-the-street interviews in “Hope in the Holy Land.” (Screenshot from film.)

Movies by Christian peacemakers about conflict in the Holy Land are usually not just bad.

They are awful. Irredeemably dishonest. They portray Israel as the villain and Palestinians as innocent victims. They tell their viewers in the United States that good Christians must demonstrate their love for Jesus by hindering — to the point of dismantling — Israel’s ability to defend its citizens from Palestinian terrorism.

In the narrative offered by films such as “Children of the Nakba (2005),” “Little Town of Bethlehem (2010),” and “God On Our Side (2010),” Christians must confront Jewish power and Jewishness — and not their own sin — to prove they are good followers of Jesus. In the narrative promoted by these movies (and a lot of other Christian commentary about the Holy Land), Israel is the singular locus or target of God’s judgment in the Middle East and the modern era.

Maybe we have turned a corner with “Hope in the Holy Land” produced by the Philos Project and set for release in May 2021. This film, produced by Todd Morehead and Justin Kron, does something that some Christian filmmakers such as Porter Speakman, Jr. and Jim Hanon and writers like Bruce Fisk and Gary Burge have a tough time doing — confronting the misdeeds of Palestinian leaders and the profound obstacles to peace inherent in Palestinian society.

The film is not perfect. For example, it gets the chronology of a crucial piece of history — the Six Day War — wrong. (More about that below.)

Nevertheless, the film is an honest attempt by Christians to address the hows and whys of conflict in the Holy Land. It casts an unflinching eye at anti-Israel incitement and hostility in Palestinian society and the authoritarian nature of the Palestinian Authority.

At the outset it is necessary to confront one factual misstatement in the film. In recounting the events of the Six Day War, the film’s narrator reports the following:

In 1967, under threat of attack, Israel launched a defensive war against Egypt, Jordan, and Syria. As a result, Israel gained control of East Jerusalem and the West Bank. They also took control of Gaza and the Sinai Peninsula [from Egypt] and the Golan Heights from Syria.

In fact, Israel made a preemptive attack against Egypt — and only Egypt — and did not take control of the Golan Heights, East Jerusalem, the West Bank until after Syria and Jordan attacked the Jewish state.

In fact, Israeli leaders begged Jordan not to attack. Nevertheless, Jordan did attack after being given misinformation about how well Egypt was doing in its fight against Israel when in fact it had effectively lost the war in the first few hours (with its air force destroyed).

This misstatement of fact falsely conveys to viewers the notion that Israel captured territory from Syria and Jordan by attacking first, when in fact it captured the territory from these two countries only after they had attacked Israel.

This is relevant because in the face of so much anti-Zionist propaganda, many of the film’s viewers will be primed to think of Israel as a preternaturally aggressive land-taking nation even when the accurate chronology demonstrates otherwise.

There is another problem with the film: its brief treatment of the massacres that took place during Israel’s War for Independence in 1948. The film allows an anonymous Palestinian Christian supporter of Palestinian Liberation Theology (identified only as “Peter”) to recount in passing the disputed allegation that Jewish militias perpetrated a massacre at Deir Yassin in 1948. “Peter” states that in light of this attack, Christian Zionist support for Israel is based on the Exodus narrative, which he describes as telling the story of one people being saved at the expense of another. “We don’t take the story of Exodus as a liberation story,” he says, and Palestinians refuse to “be a victim of a victim.”

There are two problems with the manner in which “Peter” is allowed to deploy this story. First, the events at Deir Yassin are disputed. Ayish Zeidan, a survivor of the fighting in Deir Yassin, told a British newspaper that:

The Arab radio talked of women being killed and raped, but this is not true… I believe that most of those who were killed were among the fighters and the women and children who helped the fighters. The Arab leaders committed a big mistake. By exaggerating the atrocities they thought they would encourage people to fight back harder. Instead they created panic and people ran away. (Daily Telegraph, April 8, 1998)

Moreover, Israeli researcher Prof. Eliezer Tauber has published a book in Hebrew, Deir Yassin – The End of the Myth, (a summary of which can be read in English here), in which he attempted to document the manner of death of every one of the 101 people killed during the battle for Deir Yassin. Most of the deaths were battle-related. Tauber summarized his findings in The Times of Israel as follows:

For the past five years, I have carried out an in-depth research into the affair, learned to know the village, who lived there and where, their names, and above all, the exact circumstances of death of each of the people killed there. The results were astounding, but clear. There was no massacre in Deir Yassin. No rapes. Lots of unfounded Palestinian propaganda.

And a Google translation of a Hebrew-language interview with Tauber reveals provides crucial details:

From the list of 101 killed [of those killed at Deir Yassin], 61 certainly died in battle, of which 24 were armed fighters and the rest were family members who were next to them. Eighteen people I could not locate how they were killed, about 10 people are in the gray area whose definitions can be discussed, and another 11 family members killed by an Irgun fighter, in a story that may be the basis for the whole myth.

This myth had a real consequence in that a few days after the battle at Deir Yassin, more than 100 Jewish fighters at Kfar Etzion were murdered after they had surrendered to Arab forces. Their killers chanted “Deir Yassin! Deir Yassin!” In addition to justifying murderous hostility toward Jews at Kfar Etzion, Palestinian propaganda associated with the battle of Deir Yassin also prompted many Palestinians to leave their homes. Tauber reports in his Times of Israel article that Arab leader Hussein Khalidi instructed that the number of deaths at Deir Yassin be more than doubled (to 254) in Arab reports about the battle:

Hussein Khalidi, the senior Arab authority in 1948 Jerusalem, was of the opinion that, “We must make the most of this.” As his assistant Hazim Nusayba reported in a 1998 interview, Khalidi said “we should give this the utmost propaganda possible because the Arab countries apparently are not interested in assisting us and we are facing a catastrophe…. So we are forced to give a picture – not what is actually happening – but we had to exaggerate.” Khalidi’s distortion of the facts failed to prevent catastrophe. Instead, it helped create one.

“Dr. Khalidi was the one who caused the catastrophe,” one of the Arab survivors ruled. “Instead of working in our favor, the propaganda worked in favor of the Jews. Whole villages and towns fled because of what they heard had happened in Deir Yassin.” The Palestinian leadership intended to exploit the affair to lay pressure on the Arab states to send their armies to Palestine to fight the Jews. The plan boomeranged. Following the rule that women’s honor comes before land, the moment the Palestinians heard about rapes they started to leave.

It’s unreasonable to expect that all of this detail be included in the film’s assessment of the 1948 War, but a reference to the disputed narrative over what actually happened at Deir Yassin would be helpful, as would a specific reference to an Arab-perpetrated massacre.

That being said, the movie does a particularly good job of countering the theology offered by “Peter” by including testimony from Evangelical theologian Gerald McDermott, who demolishes Palestinian Liberation Theology as anti-biblical. McDermott does this in the scene after which “Peter” indicates that the book of Exodus is not canonical for Palestinian Christian Liberation Theologians. Even with its problematic treatment of the battle of Deir Yassin, “Peter’s” testimony coupled with McDermott’s response highlights the how Palestinian Christians manipulate scripture to suit their ideological and political agenda.

Other Positive Aspects of the Film

There are a number of positive aspects of the film (which will not be fully recounted here in too much detail to avoid spoiling the film for viewers when it is released in May).

In particular, narrator and producer Todd Morehead models a proper attitude toward the humanity and suffering of the Palestinians without coddling or demonizing them.

He speaks compassionately about the suffering that they and the Israelis have endured, but then speaks directly about the role their leaders have played in bringing about this suffering.

The film also provides on-camera proof of how Palestinians who wish to speak the truth about the conflict between the PA and Israel are harassed and bullied by extremists in the West Bank.

The film also documents the role the Grand Mufti of Jerusalem played in inciting violence against Jews in pre-state Palestine.

The movie also demands that its Christian viewers and Palestinian Christians recognize the Jewish roots of their faith, the legitimacy of the Jewish presence in the Holy Land, their right to a sovereign state, and the blessings the Jewish state can and does bestow on Palestinians who are willing to live in peace with Jews in the land.

It also exposes how the BDS movement promotes Palestinian unemployment and suffering.

The film also reveals how Palestinians who do speak the truth about the conflict put themselves at great risk (and provides dramatic footage to demonstrate this reality).

Just to get a sense of how directly the movie confronts the misdeeds of the Palestinians, read this quote which comes very close to the end of the movie. It’s from Todd Morehead, the Christian pastor (and surfer dude) from California who produced and narrated the film with Justin Kron. After admitting that as a Christian Zionist he has, to his current dismay, regarded the Palestinians as his enemies and obstacles to God’s plan for the Holy Land, he then goes onto say:

Now that I’ve seen life through their eyes, God has changed my heart toward them. I now see the West Bank as a beautiful place with beautiful people with a strong connection to the land. But the Palestinians live under an oppressive regime that keeps them living in fear, that keeps them from speaking out against it. Their government continues to reject Israel’s right to exist and has made little effort to educate for peace, keeping generations of people stuck in a cycle of victimhood and conflict.

That is probably the best encapsulation of the problems with the Palestinian Authority put forth by a Christian peacemaker since the PA was established in the mid-1990s under the Oslo Accords.

Finally, a Christian peacemaker has words of criticism and warning — which have been so often leveled at Israel and its supporters — for Palestinian elites.