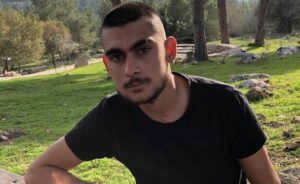 The circumstances behind Tiran’s death were completely unlike those surrounding the heavily reported deaths of Palestinian teens killed in clashes with troops, and not only because he was an Israeli citizen. It’s exactly these unusual circumstances which make his case highly newsworthy, and yet muted news coverage — inaccurate and incomplete — buried his story. Yet, fast intervention from CAMERA’s Israel office prompted substantive improvements at numerous leading media outlets.

Tiran Fero, a 17-year-old Israeli Druze citizen, was brought to a Jenin hospital after he was critically injured in a nearby car accident. According to his father who was on the scene, Islamic Jihad gunmen detached Tiran from the life-saving ventilator Wednesday (Nov. 23), killing him, and then abducted his body.

At a little after 7 am in Israel yesterday morning, Nov. 23, Tiran’s father, Husam, told Ynet Radio:

My son and I were across from the room and suddenly 20 armed and masked men from Islamic Jihad entered, horror and terror. We managed to escape somewhere and they simply kidnapped him, living, in front of my eyes. They detached him from the [life support] machines and killed him. Afterwards, they began to shoot in the air, as if they scored some big accomplishment. (CAMERA’s translation).

Army Radio also aired an interview with Tiran’s uncle around 7:30 am who said that Tiran’s father and brother witnessed gunmen disconnecting Tiran, who was alive, from the life support system to kidnap him, thereby killing him. The uncle reported that Tiran’s condition had stabilized when he was on the machine, before he was kidnapped.

Many media outlets, both Israeli and internationally, initially reported that Palestinian gunmen snatched Tiran’s body from the Jenin hospital after he died in a car accident. To be fair, these reports relied on information sent by the Israeli military several hours before the family members went on the air maintaining that terrorists killed Tiran, unplugging him from the ventilator.

Nevertheless, a couple of hours after interviews with Tiran’s father and uncle were broadcasted, English-language Israeli media outlets including Times of Israel, Haaretz, and The Jerusalem Post had yet to report the information. They were perhaps grappling to keep up in the heavy news morning, including the two Jerusalem bombings. Following communication from CAMERA, they subsequently commendably corrected inaccurate reports that Tiran died in a car accident, and followed up with additional coverage conveying the family’s account.

For instance, Haaretz‘s headline and subheadline originally claimed (screenshot at left),  “Palestinian Gunmen Holding Body of Israeli Citizen Who Died in Car Crash in Jenin,” and “18-year-old Israeli was killed in Tuesday’s accident while travelling in a friend’s car.” In response to communication from CAMERA, editors commendably edited the headings to state: “Family of Israeli Whose Body Was Kidnapped From Palestinian Hospital: Gunmen Disconnected Him From Life Support,” and “The 17-year-old was injured in an accident near Jenin on Tuesday …”

Fero’s uncle, however, said his nephew was still alive and connected to a ventilator when he was taken. “They disconnected him from the machines and tossed him into a car,” he told the Kan public radio Wednesday morning.

Hours after the English-language Israeli media reports were corrected and updated, international media outlets had yet to get up to speed. Their dereliction in covering Tiran’s story was particularly striking given their interest in the killing of another teen in Jenin one day earlier.

Saadi was a 19-year-old Palestinian who reportedly clashed with Israeli soldiers Monday (Nov. 21) as they carried out a raid to arrest a terrorist wanted for his role in shooting attacks and for planning significant upcoming attacks. Soldiers fired back at gunmen, and he was killed.

Instead, Tiran’s story was subsumed in coverage of the Jerusalem bombings.

In “Twin blasts in Jerusalem kill one in suspected Palestinian attack,” Maayan Lubell covered Tiran starting in the 13th paragraph:

In a separate incident, Palestinian gunmen late on Tuesday abducted the body of an Israeli high-school student who had died in a Palestinian hospital in the West Bank city of Jenin after being injured in a car crash nearby, the teenager’s uncle told Kan Radio. …

It is unclear why the gunmen had taken the body …

Following CAMERA’s communication with Reuters’ about the report’s failure to include the father’s account about gunmen unhooking Tiran from the ventilator, Reuters added: “The youth’s father and some Israeli officials said the gunmen took him off life support before carrying him away.”

It could be reasoned that Fero’s story was simply overtaken by the other big developing news story about the deadly bombings, but that’s not what happened at the Associated Press, which earlier this week had devoted an article to Saadi’s killing. The AP’s early article (5:38 IST, over an hour before the Jerusalem bombings), buried and whitewashed Fero’s story in an article about a Palestinian teen reportedly killed during an Israeli raid in Nablus (“Palestinians: Israeli forces kill teen in West Bank, 4 hurt,“). In the fourth paragraph, AP euphemistically wrote that Palestinians “withheld the body” of Tiran, “who was killed in a car accident” (emphasis added):

Meanwhile, Palestinians withheld the body of an Israeli civilian who was killed in a car accident in the northern West Bank city of Jenin, local media reported.

According to the Israeli military two Israelis entered the city and were taken to a Palestinian hospital following the crash, with one of them dying and the second in serious condition.

The injured man was transferred to an Israeli hospital for further treatment, but the body of the one who died was not, the military said. “The body was taken from the hospital in Jenin and is expected to be returned to Israel shortly, as a required humanitarian act,” the military said, without elaborating.

The dead person was a high school student from an Israeli minority group, it added.

Hours after Tiran’s father spoke on the radio, CAMERA contacted AP about the failure to report the family’s account. A subsequent article (“Twin blasts shake Jerusalem, killing teen and wounding 18“) did include the information:

In Jenin late Tuesday, militants entered a hospital and removed the Israeli teen wounded in a car accident. The young man, 17, was from Israel’s Druze minority. His father, who was in the hospital room with him, said the militants disconnected him from hospital equipment and took him while still alive. The Israeli military said the young man was already dead when he was taken.

“It was something horrendous. It was something that was inhumane,” Husam Ferro, the teen’s father, told Israeli news site YNet. “He was still alive and they took him in front of my eyes and I couldn’t do anything.”

A Druze community leader told YNet talks were underway on the body’s return to the family. Palestinian militants have in the past carried out kidnappings to seek concessions from Israel.

Agence France Presse, in English, Arabic and French, likewise attributed Tiran’s death to the car accident, still omitting the Feros’ information hours after they went on the air. Under a headline whitewashing the body-snatching — “Body of Israeli ‘taken’ from hospital, Palestinian teen killed”  — the AFP had initially reported:

The body of an Israeli killed in a car accident was “taken” by Palestinian militants from a West Bank Hospital Tuesday, officials said, as a teenager was killed in clashes between the army and militants.

The army said the body of an 18-year-old Israeli-Druze who died in a “serious road accident” in the West Bank was “taken” from a hospital in Jenin. . .  (Emphasis added).

Israeli Prime Minister Yair Lapid said Wednesday kidnappers in the occupied West Bank had snatched the body of an Israeli teenager, whose father saw him taken in critical condition from hospital. …

“When I saw him he was breathing, they disconnected him from the machines and kidnapped him,” Hossam Fero told Ynet radio.

The New York Times also added the family’s account after CAMERA’s communication. The initial reporting, included at the bottom of the paper’s coverage of the bombings, had stated:

The body of the victim, a member of Israel’s Arabic-speaking Druze minority, was later seized from a Palestinian hospital by Palestinian militants, who are seeking to exchange it for the bodies of dozens of Palestinians accused of terrorism, which are currently held by the Israeli government.

After CAMERA reached out to the paper, The Times responsibly amended the article to include the Feros’ account:

The victim, Tiran Fero, a member of Israel’s Arabic-speaking Druze minority who was about to turn 18, was seized from a Palestinian hospital in Jenin by Palestinian militants who disconnected him from a ventilator in the intensive care unit, according to relatives who were in the hospital and said they witnessed his abduction. The relatives said Mr. Fero later died. Officials were examining the family’s account and whether Mr. Fero was alive or already dead at the time of the abduction.

Tiran’s body was returned to Israel overnight and his family will bury him shortly. A 12th grader from the Druze town of Daliyat al-Karmel, Tiran would have been 18 today.