Anyone who has experienced the terrifying sirens in Israel warning of incoming rocket fire understands that this trauma is not something that you ever “get used to.” Thousands of rockets launched by Palestinian terrorists in the Gaza Strip have battered residents of southern Israel in recent years. That makes them experienced with running for safety in less than 15 seconds before impact; it doesn’t make them “used to it.”

The people of the agricultural collective, founded in 1982, long ago got used to cross-border rockets, mortar fire and spikes in heavy bombardment, which often ends as rapidly as it starts.

One “gets used to” a new routine or living situation – a new commute, new food, a new job, a new roommate, a new haircut. One does not get used to being under rocket fire anymore than one gets used to domestic violence, sexual abuse, or any other trauma which harms a person’s sense of well-being, security and safety, and which inflicts long-term emotional scars. 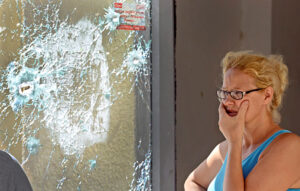 A woman inspects damage from a rocket in Sderot, 2014 (Photo by Haim Zach/GPO)

As the NATAL — Israel Trauma and Resiliency Center detailed in a 2019 report, Israelis, especially those in the south, are increasingly traumatized by Palestinian rocket attacks as years go on, not less traumatized.

In 2016, the Daily Beast reported: “One resident of Netiv HaAsara freely described herself and neighbors as suffering from “post-traumatic stress” after days on end of hearing air raid sirens that signaled residents had mere seconds to scramble into basement shelters to survive incoming rocket fire.”

Similarly, in 2014, USA Today quoted Netiv Haasara resident Ofri Volk who had lived in the community for 12 years:

“Living like this affects every part of your life,” Volk said. “Some of our children are in very bad shape emotionally. My 13-year-old daughter suffers from post-traumatic stress disorder.”

Reuters recently reported about the routine of red alerts and running for cover:

It’s not a routine you can ever get used to, said Lior Dabush from the coastal city of Ashkelon, about 12 km (7 miles) north of Gaza.

“We rarely leave the house,” Dabush, 37, said from her apartment’s ‘safe’ room – a mandatory feature for all new homes in Israel – where she now sleeps with her two children.

“We take short showers and we don’t venture far from home,” she told Reuters. “At times my eight-year-old son does not want to leave the safe room.” . . .

Idit Botera, mother of a one-year-old child, said her sixth-floor apartment was damaged in the same barrage on Wednesday.

“We still haven’t processed what happened, our blood is boiling,” she said shortly after the strike. “These are kids who are being damaged for life and it doesn’t make sense.”

The impact on children – and the effect it will have on them later in life – is a common theme for Israelis living near Gaza, for whom rockets are an unwelcome but unavoidable fact of life.

In Netiv Haasara, a small Israeli community just north of the barrier that separates Israel from the Gaza Strip, tour guide Raz Shmilovitch, 45, reflected earlier this week on the toll the latest hostilities were taking.

“My family is not here now, I have taken them to a more remote safe place in which they will be safer to stay,” he said.

“In the longer run, once the war is over we are going to have to deal with the consequences of raising post-traumatic kids,” he told Reuters.

“If you have been living all your life as a kid under the threat of rockets being launched and being landed in your back yard, and you have between five to seven seconds from alarm to impact and that is the reality you are used to, that messes with your brain.”

By reporting that Netiv Haasara residents have gotten “used to” the rockets, and by failing to describe the post-trauma stress which afflicts the community, AFP grossly falsifies the difficult realities of life there. While Smilovitch of Netiv Haasara is quoted by Reuters stating that “this is the reality you are used to,” his point about raising children suffering from post-traumatic stress disorder makes clear that rocket fire is not on the scale of life inconveniences or even simply changes that communities “get used to,” like construction, additional traffic, or new neighbors.

Separately, AFP’s figure for fatalities (12) on the Israeli side are not up to date. The death of the 13th victim, Chava Vaknin of Holon, was made public Sunday.