Amnesty International, the world’s largest human rights organization, has for years been demonstrably biased against Israel.

AI’s logo shows a flame (candle) of hope behind barbed wire – representing “prisoners” that AI aims to help. And it reminds one of the saying: “Better to light a candle than curse the darkness.”  But AI willfully dwells in darkness when demonizing Israel.

The human rights organization Amnesty International, based in London where it was founded in May 1961, has for decades demonized Israel. AI strikes again at the Jewish state in its biased report, “Denying COVID-19 vaccines to Palestinians exposes Israel’s institutionalized discrimination” (Jan. 6, 2021).

Over half a century of occupation and enforcement of a system of institutionalized discrimination in the OPT [“Occupied Palestinian Territories”], including East Jerusalem, Israel has deprived Palestinians of their basic rights and committed mass human rights violations. Israel must end its discriminatory policies and remove any barriers that may hinder Palestinians from accessing or enjoying health care…

Israel’s obligations under international humanitarian law include the duty of ensuring and maintaining “the medical and hospital establishments and services, public health and hygiene in the occupied territory, with particular reference to the adoption and application of the prophylactic and preventive measures necessary to combat the spread of contagious diseases and epidemics”, as per Article 56 of the Fourth Geneva Convention… 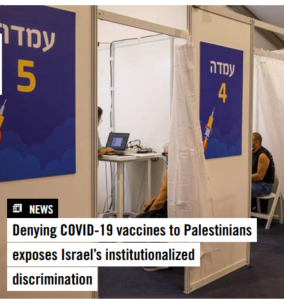 First, AI is wrong about the applicability of the Geneva Convention here since the Convention is superseded in this case by the Oslo Accords (unmentioned in AI’s report), the relevant agreement between Israel and the Palestinians.

The Oslo Accords, recognized as international law, puts health care, including vaccinations, in the hands of the Palestinian Authority (PA). Article 17 of the Oslo II agreement states: “powers and responsibilities in the sphere of Health in the West Bank  and Gaza Strip will be transferred to the Palestinian side.”

Moreover, AI fails to note that Palestinian leaders haven’t publicly asked Israel to supply COVID vaccines to them. This reluctance would seem to indicate that Palestinian politics has trumped Palestinian health. It may be too bitter a pill to swallow to be seen as dependent upon a people that the Palestinian dominant culture incessantly demonizes.

AI’s typical anti-Israel propaganda about “mass human rights violations” is a complete falsehood. Its phraseology about “occupation” is completely misleading since pending the conclusion of a negotiated agreement on the territories’ final status, by international law Israel remains both the legal and obligatory military occupational authority in the West Bank (biblically and historically called “Judea and Samaria” — part of ancient Israel) , which it had seized as a result of successful self-defense in the 1967 and 1973 wars.

Israel actually relinquished portions of the West Bank, notably Hebron, as part of the Oslo 1990s peace process—only to be met with violence. With the resumption of organized Palestinian violence against Israelis during the Second Intifada (2000-05), Israeli troops re-established a limited presence in the West Bank, the majority of which remains ruled by the PA. The PA has jurisdiction over the daily lives of almost all West Bank Arabs, with Israeli personnel only entering Palestinian communities to pursue those who have committed unprovoked violence against Israelis.

While AI has for years consistently insisted on what it claims is Israel’s obligations to the Palestinians, it has been consistently silent about longstanding and relentless anti-Israel and anti-Jewish invective from Palestinian leadership, media, mosques and schools. Such incitement to violence violates Article 26 (2) of the U.N. Universal Declaration of Human Rights, as well as Israeli-Palestinian agreements. It is unlikely that AI is unaware of the incitement since the evidence — via current video clips and transcripts — is readily available online and previous reports reveal much about the incitement.

Unfortunately, AI’s stated objective — “to conduct research and generate action to prevent and end grave abuses of human rights, and to demand justice for those whose rights have been violated” — is often applied unfairly so as to work against at least one community of people — Israeli Jews and their democratically elected government.