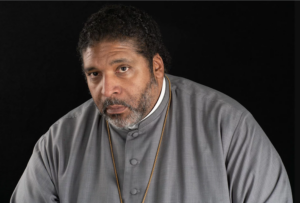 Rev. Dr. William Barber II, the former president of the North Carolina Chapter of the NAACP who regularly refers to Jesus as “a brown-skinned Palestinian Jew” and who in 2018 falsely accused Israel of “targeting” Palestinian children “simply because they want freedom,” is scheduled to give the Elie Wiesel Memorial Lecture at Boston University’s Elie Wiesel Center for Jewish Studies on Wednesday, Oct. 27, 2021.

At the title indicates, the lecture is given in honor of Elie Wiesel, a Nobel Prize-winning writer and Auschwitz survivor who documented the role Christian antisemitism played in facilitating the murder of six million Jews during the Holocaust.

In addition to falsely portraying Jesus as a Palestinian and accusing Israel of targeting Palestinian children, Barber has falsely characterized the Palestinian movement as nonviolent.

Speaking at conference organized by the US Campaign for Palestinian Rights in 2018, Barber declared that the “Palestinians have a long history of nonviolence from the general strikes of 1936 to the nonviolent mobilizations to the First Intifada to the nonviolent protest against the wall still underway at villages across the occupied West Bank to this year’s extraordinary Gaza protests in which tens of thousand Gazans young and old, men and women have stood unarmed only to be shot down by Israeli snipers.”

Asserting that the Palestinians “have a long history of nonviolence” makes sense only if one ignores numerous and persistent acts of violence against Jews in pre-state Palestine, bloody attacks on Jews during the fighting in 1947, the 1948 war, the suicide bombings and other attacks that marked the first and second intifadas, the thousands of rockets launched by Hamas, and the stabbing intifada that took place in the last decade.

Barber’s distorted witness notwithstanding, the Arab Uprising of 1936 was particularly violent, as was the First Intifada. And the Great March of Return in 2018 was the scene of a number of violent attacks against Israelis.

What Barber calls the “general strikes of 1936” was an uprising that began with the murder of three Jews on April 15, 1936. After two Arabs were killed the following day in what was thought by Arab leaders to be a reprisal attack, the killing and menacing of Jews continued unabated for the next three years. By 1937 and 1938, there was an emergence of gang warfare on the part of the Arabs living in the British Mandate.

As documented by CAMERA researcher Ricki Hollander, “On October 2 1938, an organized group of Arab attackers massacred 21 Jews — including three women and 10 children between the ages of one and twelve — in the Old Jewish Quarter of Tiberias. The Arabs stabbed, shot and burned their victims.”

Hollander quotes the New York Times coverage of the attack:

Not since the riots of 1929, when Arabs fell on Jewish men, most of whom were rabbinical students, as well as women and children, in the ancient towns of Hebron and Safed, has there been in Palestine such a slaughter as the attack of last night. The main synagogue of the town was destroyed by fire, and the district offices, the police station and the British police billet were fired on.

The attack apparently was well organized, since the Arab gang, before descending on Tiberias, cut all telephone communications. Coming in two parties from opposite directions at a given signal, which was a whistle blown from the hills surrounding the town, the firing began simultaneously in all quarters…

We could go on, but Barber’s assertion that the “general strikes of 1936” are evidence of Palestinian nonviolence is, to put it politely, false.

“Nonviolent mobilizations to the First Intifada”

Barber’s assertion that the First Intifada is also evidence of nonviolence on the part of the Palestinians is also false. According to the Israeli Ministry of Foreign Affairs, 200 Israelis were killed by terror attacks between 1987 and 1993.

Here are three attacks that took place during the First Intifada that Barber portrays as nonviolent.

The First Intifada was no “nonviolent mobilization,” as Barber suggests.

Barber’s benign portrayal of the March of Return as evidence of Palestinian nonviolence is also misleading. As documented by CAMERA researcher Gilead Ini in 2018:

There have been plenty of Palestinians, gathered around tents set up hundreds of yards from Gaza’s border with Israel, who can be described as peaceful protesters, despite their radical goal of “liberating” Israel from the Israelis. But it should be equally clear that those Palestinians are not the ones involved in clashes with Israeli soldiers, and not the ones described in media casualty counts. As the Associated Press had straightforwardly reported, “During the weekly Friday marches, most protesters have remained in the five sit-in tent camps, but smaller groups have moved toward the fence, throwing stones, hurling firebombs or burning tires.” Of particular concern to Israelis are the attempts, often by fighters from Hamas and other terror groups, to damage or cross the fence. The concern is warranted. Hamas is most well known for its deadly suicide bombing attacks targeting Israeli buses, cafes, and markets.

Barber’s depiction of the Great March of Return as a peaceful event also obscures numerous incendiary kite attacks against Israelis living near Gaza.

At the same speech in 2018, Barber declared:

Historically, it is important for us to remember that one path regarding the Zionist project in Palestine was a colonialist project from the beginning. Theodor Herzl – the founder of modern Zionism – knew that his proposal for a modern nation state for Jewish people was a colonialist project, and he pitched it to Britain’s great colonialist, Cecil Rhodes, as just that. It was never just purely about righting the terrible wrongs of the Holocaust. But for him it was about expanding a global empire.

Here, Barber portrays Zionism, the desire of the Jews to exercise their rights to self-determination, as a malign force, further justifying Palestinian violence against Israel, which he downplays elsewhere in his speech — as documented above.

CAMERA has contacted Michael Zank, Ph.D, director of the Elie Wiesel Center for Jewish Studies at Boston University, and BU’s President Robert A. Brown and asked the following questions:

Why is BU’s Center for Jewish Studies allowing a pastor with a track record of using such troublesome polemics to offer a memorial lecture given in Elie Wiesel’s name, no less? Anti-Israel propaganda such as that broadcast by Rev. Dr. William Barber II has been a crucial factor contributing to violence and hostility toward Jews throughout the United States and Europe, particularly on college campuses.

If a response is received, it will be posted on CAMERA’s website. (Note: A response, received on Oct. 24, 2021, is posted at the bottom of this article.)

Elisha Wiesel, son of Elie Wiesel who is scheduled to be giving a subsequent memorial lecture at BU, responded as follows to Barber’s past comments:

“The Wiesel family is not involved in Boston University’s selection process for the Elie Wiesel Memorial Lecture series.

Rev. Barber is a well-known and respected leader and activist, who has been at the center of inspiring work fighting for voting rights and advocating for the African-American community. This is why we were particularly troubled to hear about some of his previous comments, which echoed pernicious falsehoods – reminiscent of falsehoods broadcast from Christian pulpits in centuries past – that are deeply dangerous and harmful to the Jewish community.

The IDF does not intentionally target Palestinian children. Nor are Zionists to blame for restrictions to the voting rights of African-Americans. And the history of the Palestinian response to the return of the Jewish people to our homeland has been very different from the legacy of non-violence he describes.

We would like to take this opportunity to extend a hand to Rev. Barber, simultaneously offering our family’s help with his powerful work here in the United States, while also beginning a conversation about these past comments. We would love to accompany him on a trip to the region to review the reality on the ground for both Israelis and Palestinians.

It is our sincere hope that he takes us up on both aspects of this outreach.”

The CAMERA article is one-sided and misleading, and it mischaracterizes Reverend Barber’s avowed and published positions. Dr. Barber has on many occasions condemned every form of racism, including anti-Semitism. He counts many prominent Jews among his friends and allies, and he regularly speaks in Jewish venues. He emphasizes that the roots of his advocacy are grounded in the words of the prophets of Israel.

Reverend Barber’s standing as a prominent human rights and social justice activist is impeccable and unimpeachable. We have invited him to speak about the human rights legacy of MLK Jr. for today. He is enthusiastically welcomed by prominent members of the BU community, and it is as such that we are both the inviting agency and very happy to host his lecture.