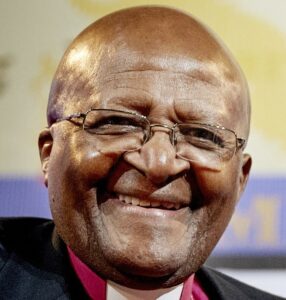 Such coverage, elevating Tutu to the status of Rev. King, for example, ignored the hostility he developed toward Israel, Zionism and the Jewish people. Determined to see in Israel an apartheid state, Tutu has remained impervious to contrary evidence.

King, on the other hand, shortly before his assassination, rebuked a student critic of Israel, saying, “When people criticize Zionists, they mean Jews. You are talking anti-Semitism” (“The Socialism of Fools: The Left, the Jews and Israel” by Seymour Martin Lipset; Encounter magazine, December 1969, p. 24.)

Tutu alleged, for example, that Israeli Jews “dominate over Palestinians.” A United Church of Christ meeting in Cleveland in 2015 cited the archbishop in support of a boycott, divestment and sanctions (BDS) resolution aimed at companies doing business in and products from what it mistakenly labeled “Palestinian territories” and “illegal” Israeli settlements. Tutu wrote:

“We grieve over Israel’s decades long oppression of Palestine [Sic.] and Palestinians: The illegal occupation…the separation wall…the network of checkpoints and settler bypass roads… [the] disruption of every aspect of daily life for Palestinians” (“UCC Action Seeking Peace Between Israel and Palestine,” Huffingtonpost.com, July 9, 2015).

In fact, Palestinian leadership has refused Israeli and U.S. offers of an independent West Bank, Gaza Strip and eastern Jerusalem country, in exchange for peace with Israel as a Jewish state, four times since 2000. If Israeli Jews dominate Palestinian Arabs, as Tutu has it, the latter have chosen repeatedly not to end such a condition if the price is peace.

Also wrong on the law
Also contrary to Tutu, “the occupation” is not illegal but obligatory, the result of successful self-defense in the 1967 Six-Day War and 1973 Yom Kippur War. Israel’s legal presence in the West Bank continues pending a peace agreement according to U.N. Security Council resolutions 242 (1967) and 338 (1973), the 1995 Israeli-Palestinian interim accord and related pacts.

Jewish communities in the West Bank (Judea and Samaria), contrary to Tutu, U.N. Secretary General Ban Ki-moon and other newsmakers, are not only legal but also encouraged or anticipated under international law. The League of Nations (later United Nations) Palestine Mandate, Article 6; San Remo Treaty, 1920; Anglo-American Convention, 1924; and U.N. Charter, Chapter 12, Article 80 all support this status.

As for the archbishop’s “apartheid Israel” allegation, Rev. Kenneth Rasalabe Joseph Meshoe, a member of South Africa’s parliament and president of the African Christian Democratic Party, told Israel’s Channel 10 “there are many Christians that support Israel, but they don’t come out. … Those who know what real apartheid is, as I know, know there is nothing in Israel that looks like apartheid.”

He said defenders of Israel usually face intimidation, but added, according to The Jerusalem Post, “calling Israel an apartheid state ‘is an empty political statement that does not hold truth,’ adding, ‘You see people of different colors, backgrounds and religions’ interacting with each other every day” (“I know what apartheid was, and Israel is not apartheid,” Aug. 25, 2015).

Tutu often has criticized Israel’s West Bank security barrier, as in his remarks for the U.C.C. in Cleveland. But he rarely, if ever speaks about why the barrier was built—to help suppress the Palestinian terrorist war of the second intifada (2000-2005), in which more than 1,000 Israelis, both Jews and Arabs, and foreign visitors were murdered.

Of Tutu’s Oct. 27, 2007 address at the Old South Church in Boston, CAMERA analyst Dexter Van Zile observed that, “At no point…did he mention groups like Hamas and Hezbollah, or other groups in the Middle East that deny Israel’s right to exist and which espouse vicious attitudes toward Jews…Archbishop Tutu…focused exclusively on Israeli checkpoints and the security barrier” (“Tutu’s Words of Philo-Semitism Ring Hollow,” CAMERA, Nov. 5, 2007).

At the 2007 Sabeel Conference in Boston Tutu said, “The world needs the Jews, Jews who are faithful to the vocation that has meant so much for the world’s morality, of its sense of what is right and wrong, what is good and bad, what is just and unjust, what is oppressive and what sets people free. Jews are indispensable for a good compassionate, just and caring world” (“Desmond Tutu: Above Reproach?” The New Republic, Oct. 31, 2007).

Insisting on a double standard
Writer James Kirchick noted, “Not surprising for a man of the cloth, Tutu’s speech is predicated on his theological expertise. It consists entirely of an explanation of the Hebrew Bible, replete with chapter and verse, and attempts to show why not just the State of Israel, but ‘the Jews’ are violating its covenants, lecturing us all on how ‘the people of this God were expected to behave.’ Tutu makes the point, never expressly but hardly subtle, that ‘the Jews’ are defying their own religion.

“He also unwittingly slanders the history of the anti-apartheid movement (of which he was himself a crucial part) by comparing it to Palestinian nationalism. The former, while certainly characterized at times by terrorist activity as well as brutality against its own cadres, was never subsumed by the sort of jihadist culture of the PLO [Palestine Liberation Movement] and Hamas [Palestinian Islamic Resistance Movement], nor did it ever call for a South Africa devoid of whites, as opposed to the leading Palestinian nationalist movements which are, and have always been, violently anti-Semitic in philosophy and practice.”

Tutu’s “the world needs Jews” was disingenuous. He paired recognition of Jews and Judaism’s central role in the rise of ethical monothe
ism with a sweeping indictment that essentially demonized the Jewish state and Jewish people.

For example, in an article written for The Guardian (U.K.) Tutu wrote, “People are scared in [the United States], to say wrong is wrong because the Jewish lobby is powerful—very powerful” (“Apartheid in the Holy Land,” April 28, 2002).

That Tutu chose to appear at a Sabeel forum, as at Boston in 2007, itself suggests anti-Zionist and antisemitic beliefs. Sabeel, as CAMERA has pointed out, “[has a] passion to demonize Israel…The way the Arab-Israeli conflict is described [by Sabeel, deems] nothing… the fault of the Palestinians or their Arab ‘supporters;’ [and] everything… Israel’s fault” (“Sabeel’s Demonizing Liturgy,” CAMERA, Dec. 7. 2007).

Then there is Tutu’s participation with former U.S. President Jimmy Cater in the grandiosely named collection of self-described peacemakers “The Elders.” The group comprises former high-ranking political figures dedicated to promoting human rights, except perhaps in the case of Jews and their state. Among the most well-known members have been the late Nelson Mandela, former president of South Africa; Mary Robinson, former president of Ireland, Carter and Tutu—all vocal critics of and sometimes—like Carter— apologists for Israel’s enemies (see “Washington Jewish Week: Carter’s Elders of Anti-Zion,” CAMERA, Feb. 3, 2011).

Of Tutu, Harvard University Law School Prof. Emeritus Alan Dershowitz has written that he “is no mere anti-Zionist …. He has minimized the suffering of those killed in the Holocaust. He has attacked the ‘Jewish’— not Israeli — lobby as too ‘powerful’ …. He has invoked classic antisemitic stereotypes … about Jewish ‘arrogance,’ ‘power’ and money …. [A]nd has accused ‘the Jews’ of causing many of the world’s problems” (“Bishop Tutu Is No Saint When it Comes to Jews,” Dec. 20, 2010, The Gatestone Institute). Tutu, impervious to facts, also has denied that Israel is a civilized democracy and unsuccessfully urged the Capetown Opera not to perform there.

Tutu’s principled stand against apartheid 30 years ago won him the Nobel Peace Prize. His campaign since against the Jews and Israel has severely tarnished it.