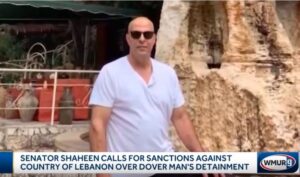 AP headlines in recent days which state that Lebanese-American Amer Fakhoury “worked for Israel” expose a double standard in the news agency’s treatment of members of the Israel-backed South Lebanese Army versus members of the Iranian-backed Hezbollah. The inaccurate AP headlines claimed: “Probe of Lebanese-American who worked for Israel postponed” (Feb. 3) and “Lebanese-American who worked for Israel charged with murder” (Feb. 4 .
Fakhoury, gravely ill with cancer, was imprisoned in Lebanon in September after returning to his homeland following many years living as an American citizen in New Hampshire. He fled Lebanon via Israel in 2000, when Israel withdrew its forces from southern Lebanon. As a former member of the Israeli-allied South Lebanese Army, he has acknowledged working at the Khiam Prison in southern Lebanon, during Israel’s occupation. His lawyers, his family and U.S. Senator Jeanne Shaheen say they have documents proving that he was not the “butcher” which Lebanese and Hezbollah officials claim he was.
AP’s headlines claiming that Fakhoury “worked for Israel” are wrong because the Khiam Prison was run by the SLA – not Israel.

The SLA was allied with Israel, and received training, funds and weapons from the Jewish state, just like Hezbollah is currently backed by Iran and receives from the Iranians training, funds and weapons. AP justifiably does not say that every Hezbollah member “works for Iran,” and yet the news service is applying a different standard when it comes to a member of a Lebanese organization formerly backed by Israel.

Notably, it appears Fakhoury was investigated by the General Directorate of the General Security which is Hezbollah-linked. Thus, if AP were to apply a consistent standard when it comes to Lebanese organizations backed by foreign states, Fakhoury was interrogated by agents who “work for Iran.”
AP’s Feb. 3 article claims that Fakhoury “confessed he’d worked for Israel during its occupation of Lebanon, state-run National News Agency reported.” On the other hand, the other story reports: “Lebanon’s intelligence service says he confessed during questioning to being a warden.”
According to the Hezbollah-affiliated al-Mayadeen website, Fakhoury specifically confessed to Lebanese General Security that he has obtained an Israeli ID and passport, which he used to get out of “Occupied Palestine.” According to the report and Lebanese legal norms, fleeing the country via Israel is tantamount to “collaboration” with Israel. Western news agency like AP, however, are surely not bound to adopt this terminology. 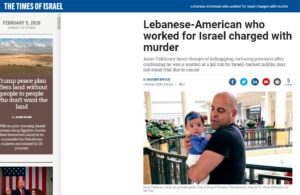 While AP declined to remove the double standard from its coverage of members of Israeli-backed Lebanese organizations versus coverage of those belonging to Iranian-backed Lebanese organizations, the Times of Israel commendably amended its AP headlines which initially falsely stated that Fakhoury “worked for Israel.” The headlines now refer to the “Lebanese-American who worked at Khiam jail” and the second qualifies that the Lebanese-American “allegedly worked for Israel.”
With research by CAMERA Arabic 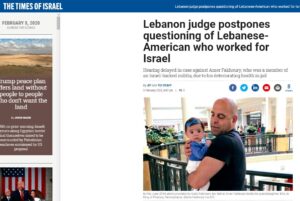