A caption for a Feb. 4 AP World Photo by Nasser Shiyoukhi erroneously stated Palestinian police officers
were “barred by Israel from carrying arms” and remained “on the sidelines”: 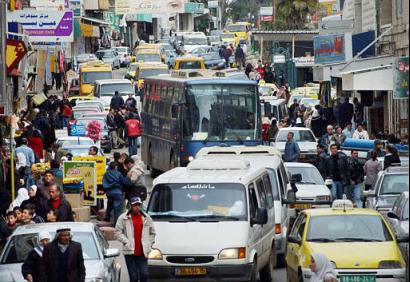 The downtown streets of the West Bank town of Ramallah fill with traffic Wednesday Feb. 4, 2004. Frustrated and frightened over lawlessness, Palestinians have begun sticking close to home after dark and increasingly look to militia leaders for protection or to settle scores. Government officials have been beaten and kidnapped, rival gangs wage gunfights in the streets, and increasingly deadly family fueds rage unchecked–while police officers barred by Israel from carrying arms remain on the sidelines.

Yet the New York Times reported almost a week earlier, on Jan. 29, that Palestinian police in West Bank cities were newly armed and
in uniform:

Palestinian security chiefs said their officers in West Bank cities now had permission from Israel to wear uniforms and carry registered sidearms, after several months of negotiations that were sealed in a meeting on Tuesday between top security officers from both sides. (“Israeli Raid in Gaza Kills 8 Palestinians,” Greg Myre and James Bennet, Jan. 29)

Apparently, the “sidelined” Palestinian police in the AP World Photo had been armed and in uniform for
almost two weeks.  Perhaps this is why one can read about these unadorned police officers in the AP
caption, yet find none in the photo itself.