On May 10, 2021, Hamas and other terror groups in the Gaza Strip opened fire on Israel, launching barrages of rockets toward Jerusalem, Tel Aviv, and across the country. In response, Israel struck at Hamas targets in Gaza.

One of those killed in the Hamas-ruled territory on May 10 was Saber Ibrahim Mahmoud Suleiman, the Hamas militant commander pictured below. 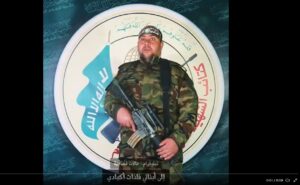 Saber Suleiman, a Hamas commander killed shortly after Hamas launched barrages of rockets at Israel on May 10, 2021

A day later, even as hundreds of rockets continued to fly into Israel, a journalist named Hiba Yazbek took to Twitter to post video of Suleiman’s funeral and to say she was livid at Israel for having supposedly “murdered” the man. 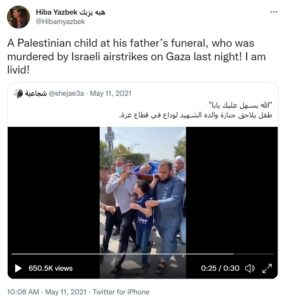 A serious observer, and especially a sober-minded journalist, would be expected to know the difference between “murder” and a legitimate military casualty. Even without knowing Suleiman was a Hamas commander — something that was already clear to analysts and even anti-Israel groups — a good reporter would be expected to strive for objectivity; to understand that many Gaza civilians had already been killed by misfired Hamas rockets and that this could certainly have been one of them; and that even civilians inadvertently killed by Israeli strikes targeting military objectives are not murdered.

Yazbek’s comment, in other words, was far from serious, sober, or objective-minded. And so a year later, she was hired by the New York Times to report on the conflict.

That the newspaper would hire such a partisan is telling.

For context, Yazbek is hardly the first person with a history of anti-Israel comments to be employed by the Times. A decade before joining the newspaper in 2015, Diaa Hadid had worked for the anti-Israel NGO Ittijah, had written that she even “can’t look at Israelis any more,” and insisted the Jewish-state was a country “founded on hate.” Her “objectivity got thrown out the window,” she had admitted. (Hadid has since left the Times.)

Shortly after the 9/11 attacks, while a student at the University of Florida, Raja Abdulrahim wrote to her campus paper to protest a description of Hamas and Hezbollah as “terror organizations” that have “murdered innocent Israeli civilians. A few years later, she was given a thousands of dollars by the anti-Israel (and anti-synagogue) organization CAIR to “encourage” journalism that is congruous with CAIR’s ideology. Recently, Abdulrahim was hired by the New York Times.

But in Yazbek’s case, the evidence of a skewed perspective about the conflict is particularly recent relative to her hiring.

It might never be clear to readers what impact Yazbek has on coverage, since she is currently a News and Reporting Assistant” and not a correspondent. But her future journalism isn’t the point. The issue, currently, is what the New York Times has already done: It has hired carefully to curate the skewed reporting it’s known for. And it has delivered the anti-Israel reporting.

Yazbek’s Twitter post last year is a case-in-point. In 2021, she charged Israel with “murder” for military action against rocket strikes. Right around that same time, the New York Times charged Israel with killing Palestinians who were actually killed by misfired Hamas rockets, and refused to correct its error. The employer and employee are clearly compatible.

The pattern of bias at the paper isn’t a coincidence.

More of the Same

In recent weeks alone, Times journalists have characterized Tel Aviv as Israel’s capital; have falsely conveyed that Hamas views the only the West Bank, and not all of Israel, as occupied territory; has suggested Israel is to blame for the recent wave of terror attacks; have fallaciously charged that Israel hasn’t criticized Russia; has cast Jewish history in the biblical heartland as questionable; and has peddled the flagrantly false view that all the Palestinians killed during Israel’s recent counter-terror operations were civilians. With Yazbek’s hiring, we can expect more of the same.

Hiba Yazbek didn’t mention the name of the Gaza casualty she wrote of on Twitter, leaving it almost impossible for the average reader to known that the supposedly “murdered” Palestinian was actually a terrorist from Hamas’s Izz ad-Din al-Qassam Brigades.

But it was evident to careful observers like Joe Truzman, a research analyst at the Foundation for Defense of Democracies. In response to a Twitter post critical of Yazbek’s language, Truzman pointed out that her footage actually showed a Hamas fighter by the name of Suleiman.

That video is from the funeral of a Hamas fighter. His last name is Suleiman. He and his son were killed fighting against Israel last year.

By examining Yazbek’s footage and cross-referencing it with other published images, it is possible to independently confirm her video was of Saber Suleiman’s funeral. Her video focuses on a child with a blue t-shirt with the text “World Championship” curved along the collar. A photographer for Al Jazeera posted a photo of the same boy, with a caption describing him as one of “the children of Saber Suleiman during his funeral.”

Consistent with the newspaper’s habit of omitting, distorting, and misleading, the feature gave no hint that he was killed in a strike on his father, the Hamas militant. It’s an inconvenient detail that the New York Time apparently didn’t want readers to know. And it’s a reticence they share with their new hire.

We wonder whether @nytimes (and @DCIPalestine) were aware of this before going to print as the information was posted to Twitter on 11 May 2021.
https://t.co/9PIklTSod7 pic.twitter.com/2ItGdRqMLR