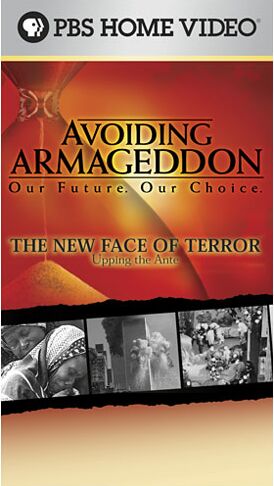 “The New Face of Terrorism: Upping the Ante” is the third film in the series which aired on four consecutive nights in April 2003 on PBS. The other films focused respectively on biological and chemical weapons (Part I– “Silent Killers: Poisons and Plaques; “) past and present dangers from nuclear weapons (Part II—”Nuclear Nightmares: Losing Control;”) and homeland security (Part IV – “Confronting Terrorism: Turning the Tide.”) All are now being sold on DVD and VHS videotape.

Those acquainted with the tilt in Middle East reporting by Turner’s Cable News Network (CNN) will not be surprised that “The New Face of Terrorism” is similarly slanted. The piece examines Osama Bin Laden’s Al Qaeda movement, Islamic supporters of “Jihad” in London, historical movements that have used terrorism to obtain independence, and the motivations of would-be suicide bombers. While some of the segments on worldwide terrorism are informative and absorbing, the work as a whole places undue emphasis on Israel’s supposed involvement in terrorism, both historic and current, pai—ng Israel—just as – has in the past – as being at the root of much of the terrorism in the Middle East.

Thus the unit examining liberation movements that have employed terrorism to obtain independence focuses primarily on “the Jewish state of Israel.” While campaigns of terror against civilians by Kenya, Malysia and Viet Nam receive only passing mention, and those by the IRA (Irish Republican Army), ETA (Basque Homeland & Liberty) and PKK (Kurdish Workers Party) are not referred to at all, the greatest part of the section is devoted to scrutinizing the “terrorism” attributed to Israel’s pre-1948 Irgun. (The group’s well-documented multiple warnings before the bombing of British military headquarters at the King David Hotel are known to have been disregarded at the time by the British, yet are cast into doubt here by narrator Cronkite.)

One might well wonder why the Irgun’s actions are the starting point of discussion about historical terrorist groups? After all, there is no reference to the anti-Tzarist group, Narodnaya Volya, in the late nineteenth century nor to any other political terrorism predating the Irgun.

While this emphasis on “the Jewish state” makes little logical sense, it does follow the familiar pattern of presenting Israel as being a core problem. Hence, the film asserts that, in Cronkite’s words, “the Jewish state of Israel was born of violence” by Jewish groups using “the tactics of terror.” And a subsequent segment on terrorism within Algeria is introduced as “the lessons of the birth of the State of Israel [taken] several steps further,” as though to suggest that the tactics employed by the Israeli group served as the prototype for all future terrorism.

Most conspicuously, there is almost no attention given in the entire film to Palestinian terrorism. In fact, the only allusion to Arab terrorism against Israel comes in a brief clip of the 1972 murder of Israeli athletes at the Munich Olympics by Black September, glossed over in less than a minute along with fleeting clips of major terrorist attacks by others – the 1983 suicide bombings in Lebanon, the 1988 attack on Pan Am Flight 103 and the 1995 subway attacks in Japan.

The Palestinian Liberation Organization (PLO), forerunner of the present Palestinian Authority, after all, made its name synonymous with spectacular terrorist events. “Armed struggle is the only way to liberate Palestine. Thus, it is the overall strategy, and not merely tactics,” reads Article 9 of the PLO Covenant. Directed not only at Israeli civilians but at U.S. officials,Palestinian airplane hijackings, bombings, and targeting of embassies may, in fact, have served as a model for more recent Al Qaeda attacks. Yet this is all but ignored in the film.

Investigating the motives of would-be suicide terrorists, the film presents two segments. The first is about a former Sri Lankan Tamil Tiger who had volunteered to be a suicide bomber but later changed his mind and escaped, and the second, lengthier one concerns a Palestinian youth living in the Hudna refugee camp in Gaza who “hopes to become a martyr.”

Whereas the film portrays the former terrorist and other “Black Tigers” (suicide bombers) as victims primarily of the incitement, indoctrination and training of the rebel Tamil Tiger group, it presents the Palestinian would-be terrorist as victim only of Israel’s “occupation.”

The omissions are striking–particularly in contrast to the segment on the Black Tigers. There is no discussion of the role played by Palestinian media, schools, clerics and political leaders in the promotion of “martyrdom,” or suicide attacks. There is nothing about the music videos, advertisements and programming on official Palestinian Authority television promoting hatred of Jews and Israel. There is no mention of the summer camps, textbooks, essay contests, university exhibits and rallies applauding “martyrdom operations” against the Israeli enemy and no reference to the Muslim clerics calling for jihad against Israel and the United States.

Instead, we hear Walter Cronkite intone that “violence and war are an unyielding spiral” as he introduces the featured Palestinian youth as someone who “resents Israel and what he feels it has done to his community.” We listen as guest experts—Judith Kipper, Eyad El-Sarraj and Vali –r–talk about the helplessness of Palestinian youth living under Israeli “occupation.” And we watch the camera-friendly and well-indoctrinated 17-year-old Ahab discuss “how everybody hopes to become a martyr” and how “the most beautiful thing is jihad and the cause of good” as he rails against “the Jews.”

The film does provide interesting perspectives on the Al Qaeda organization, Osama Bin Laden and British Islamists calling for jihad against the West, but when it turns to Israel and the Palestinians, it becomes less an exposé on terrorism and more just another Turner-financed diatribe against the Jewish state.