CNN’s Ben Wedeman today claims that Jerusalem has has never been more divided, while at the same time advocating for an end to Israel and its replacement with a so-called “one-state solution,” which is understood by both Palestinians and Israelis to represent an end to the world’s only Jewish-majority state, and with it the political freedoms and security that it represents for Jews. 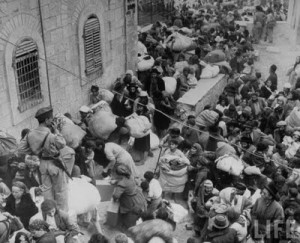 Jewish residents forced out of the Jordanian-ruled Old City in 1948.

The piece in question is labeled by CNN as an “analysis,” but is in actuality a thinly veiled opinion piece, in which the opinions expressed by Wedeman, CNN’s factually-challenged and biased international correspondent in Beirut, are based on absurd claims, perverse conclusions, and an utter disregard for the struggles of Israeli Jews.

Perhaps the most absurd of the piece’s assertions is Wedeman’s claim, which appears in both the body of the piece and in its headline, that Jerusalem is more divided than it has ever been: “Israel captured East Jerusalem, which includes the Old City, in June 1967″ and unified it with the city’s Western half under Israeli sovereignty,” writes Wedeman. “Almost ​54 years later the city it claims to have reunited has never been more divided.” 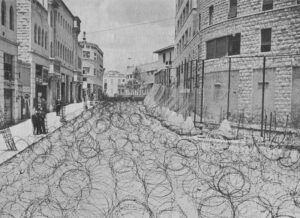 Barbed wire fills a street that between 1948 and 1967 separated the Jordanian-controlled section of Jerusalem from the rest of the city.

Never? Although the divisions today between Jerusalem’s Jews and Arabs are real, with extremists among both populations clashing in the streets in recent weeks, the very fact that Jews and Arabs in the city can intermingle on both sides of the former dividing line — usually peacefully, despite more dispiriting news recently — underscores how bizarre Wedeman’s claim is.

After the Kingdom of Jordan illegally seized eastern Jerusalem in 1948, and until the city’s reunification in 1967, Jews and Arabs didn’t mix in the eastern sector of the city. That’s because Jews were forced out from that side of the city. The Old City’s Jewish Quarter was emptied. Synagogues were razed to the ground or desecrated. Jewish gravestones were used as pavers. Jews couldn’t pray at the Western Wall. Fences and barbed wire cut through the heart of the city, with each side imperviously sealed off from the other. 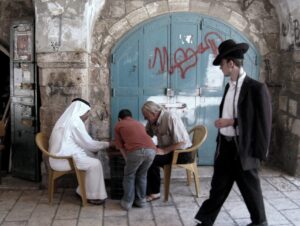 Presently, Jews and Arabs coexist, mostly peacefully, in both sections of the united city. (Archival photo)

Today, by contrast, Arab Jerusalemites shop in boutique stores in the predominantly Jewish side of the city and picnic in the same parks, while Orthodox Jews on their way to prayer pass Arab shopkeepers in the Old City’s narrow walkways. Visitors can generally walk from one side of the city to the other without realizing they’ve passed what was a heavily fortified armistice line that acted as an international border. This is remarkable considering the enemy armies that once manned either side, and all the more remarkable considering the tensions between residents who represent either side of an ongoing conflict.

But a closer read of the “analysis” reminds us that the CNN correspondent promotes an anti-Israel political settlement because, despite being employed as an impartial journalist, he has an anti-Israel worldview. Regular Israelis are nowhere to be found in Wedeman’s piece. Readers are told only of drones, armed police, a nuclear arsenal, and and “hardline Prime Minister Benjamin Netanyahu.”

By contrast, Wedeman humanizes Palestinians from the start, speaking of a Arab “housewife” of gentle “age and demeanor,” an “restive population” that is “controlled” by Israel, and a “new generation of young Palestinians” of noble beliefs who fight the power.

Unlike Netanyahu, Mahmoud Abbas isn’t cast as “hardline,” although he has rejected opportunities for peace and statehood, and has publicly spewed antisemitic slurs and conspiracies that go well beyond divisive language used by Netanyahu.

Hamas, meanwhile, although described as being “unpopular” among Palestinians for its heavy-handed misrule of the Gaza Strip, is effectively excused for its war crimes against Israelis. All Wedeman says about the organization’s rocket attacks targeting Israeli civilians is that its “crude missiles” bolster the group’s credibility but also lead to Israeli counterattacks that “deepen the misery of Gaza’s population.” There is nothing about the misery these rockets inflict on Israelis. (Remember, Israelis don’t exist as human characters in the piece.) Not a word about the nights rushing to bomb shelters with grandparents and children in tow, let alone the deaths and injuries caused by the “crude” rockets.

And if Wedeman downplays Palestinian rockets, it should be no surprise that he also distorts lesser Palestinian violence. Referring to the violent Palestinian rioting against Israeli security forces, which led to widening clashes, Wedeman writes about “hundreds of young men who had fought back with rocks and fireworks when Israeli security forces stormed into the Haram al-Sharif, or Temple Mount.” Fought back against… a storm? Even CNN’s own reporting elsewhere acknowledges that, in reference to those clashes, “police say at least six officers were wounded when clashes broke out after worshipers started throwing rocks and other objects.”

Why, then, does Wedeman dismiss this account and insist that the Palestinian rioters merely “fought back” against some vague movement? It is because this “analysis” by CNN is not only an anti-Israel opinion piece, but yet another factually shoddy one by its international correspondent.