Evangelical Protestants in the United States have a well-deserved reputation for supporting Israel, but there are signs that younger people in that community are abandoning their support for the Jewish state.

One of the factors contributing to this trend is the publication of books by Evangelical scholars who portray Israel as an affront to all that is good in the world, especially the Christian faith.

These writers combine a dishonest portrayal of Israeli and Jewish history with a hostile theological interpretation of Christian scripture. They depict Christian support for Jewish efforts to achieve survival and sovereignty in the modern world as a betrayal of the Christian faith. In this narrative, the Jewish quest for survival and well-being is more worthy of contempt than efforts to kill and terrorize Jews in their homeland. They promote contempt for Jewish life in Israel.

One egregious example of this phenomenon is the writings of Gary Burge, who currently serves as the Dean of Faculty at Calvin Theological Seminary in Grand Rapids, Michigan. In the first edition of his notoriously hostile text, “Whose Land? Whose Promise? What Christians Are Not Being Told about Israel and the Palestinians,” Burge maligned Israelis with falsehood after falsehood, declaring, for example, that Israeli Arabs are denied membership in Israel’s labor movement, when in fact they have had access to full membership in Israel’s largest union — Histadrut — since 1959. He reported that all Israeli Arabs were barred from service in Israel’s military and that they were prohibited from joining Israel’s major political parties — another falsehood.

In this same text, Burge made his objection to Jewish sovereignty in the land of Israel explicit when he argued that in light of the Gospel of John, Jews who do not believe in Jesus and try to live in the land of Israel will be “cast out and burned.” Predictably, he made no such argument about the residence of Muslims in the Holy Land — just Jews. 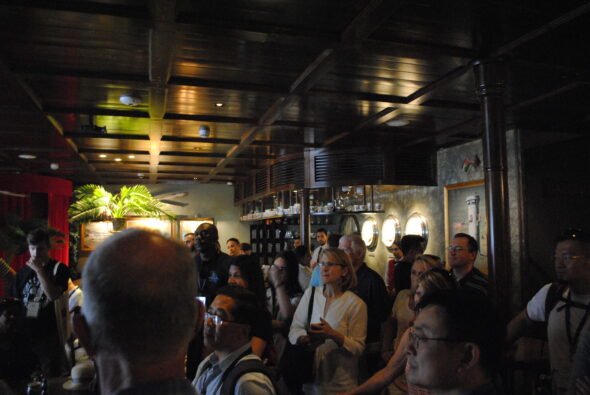 Evangelicals on a propaganda tour organized by Bethlehem Bible College as part of its 2018 Christ at the Checkpoint Conference. The tour was of the Walled Off Hotel in Bethlehem. (Photo: Dexter Van Zile)

Donald Wagner, an ordained Presbyterian clergyman who used to teach at North Park University in Chicago, an Evangelical stronghold, is another Evangelical promoter of Christian hostility toward Israel.

In his book, “Dying in the Land of Promise: Palestine and Palestinian Christianity from Pentecost to 2000,” Wagner, who previously served as executive director of the anti-Zionist Friends of Sabeel North America, compared Israelis living in the West Bank to a “killer vine” strangling a rose bush in his backyard.

Bruce Fisk, a scholar affiliated with Westmont College, is another member of this cadre of Evangelical anti-Zionists. In a blog post, Fisk once wrote, “For now I can only ask: how can Jews so zealously religious be so hateful and malicious?”

In his text, “A Hitchhiker’s Guide to Jesus: Reading the Gospels on the Ground,” Fisk compares Palestinian informants who provide Israel with the information it needs to prevent terror attacks against civilians, to Judas Iscariot — who betrayed Jesus Christ to the Romans.

“Judas Iscariot is the poster boy for collaborators,” Fisk writes, stating that he feels sorry for collaborators because they can’t go back once they’ve crossed the line. “The high priests of espionage never take back the shekels.” Here, Fisk portrays the Palestinian cause in the same vein as the work of Jesus Christ, and Israeli self-defense against terror attacks with Christ’s murder.

More recently, Fisk wrote a glowing endorsement of “Like Birds in a Cage: Christian Zionism’s Collusion in Israel’s Oppression of the Palestinian People,” by David M. Crump. In this 2021 book, Crump argues explicitly that political Zionism is the modern-day equivalent of Nazism. “American Evangelism,” Crump writes, “is helping to finance political Zionism’s flagrant imitation of Nazi Germany.”

Crump isn’t talking about the Holocaust specifically, but Israeli “land theft” in the West Bank, as if a territorial dispute with the Palestinians that the Israelis have tried to end with numerous peace offers is the equivalent of the Nazi invasion of and mass murders in Czechoslovakia, Poland, the Soviet Union, France, the Balkans, and Belgium during World War II.

It’s an outrageous comparison, made worse by falsehoods and omissions that downplay the hostility that Arab and Muslim countries in the Middle East have directed toward the Jewish state over the years.

For example, Crump invokes the controversy over a mistranslation of a 2005 speech by Mahmoud Ahmadinejad to chide Israeli leaders for their “repeated claim that Iranian leaders have publicly declared Iran’s desire to wipe Israel off the map.”

Ahmadinejad did not say Israel should be wiped off the map, but that it “must vanish from the pages of time.” Not much of a difference. And in fact, declarations that Israel must be wiped off the map are a staple of anti-Israel propaganda in Iran. Ahmadinejad has spoken of “a black and filthy microbe called the Zionist regime.” No person truly interested in promoting peace would downplay Iranian hostility toward Israel. Only an unreasonable bigot would do so.

Evangelical (and Jewish) leaders in the United States have a problem. There is a hard core of anti-Israel bigots who, over the years, have portrayed Israel in the most hateful and dishonest terms. It’s time to call them out, forcefully.