News headlines last week reported on the rare archeological find of a private Kingdom of Judah-era toilet discovered in the remains of a luxurious mansion in Jerusalem. Haaretz noted the presence of dozens of bowls around the ancient lavatory, about which an Israel Antiquities Authority (IAA) official speculated: “they held air freshener, an aromatic oil or incense – anything to make use of the facility less onerous” (“Biblical-era Toilet With Possible Air Fresheners Found in Jerusalem“). 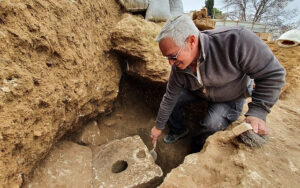 While aromatic oil might have done the olfactory trick in the First Temple-period bathroom, all the fragrant incense in ancient Judah can’t conceal the stench of media reports that erase the long, rich Jewish history of ancient Israel.

The Associated Press’ short article last week on the unusual toilet find was a prime example of news media dumping on Jews’ ancient history in their ancestral homeland (“2,700-year-old toilet found in Jerusalem was a rare luxury“). The leading news agency cited the “rare ancient toilet in Jerusalem dating back more than 2,700 years” while diligently failing to note the historic period in question: the First Temple Period.

Read the rest of Tamar Sternthal’s Op-Ed at Times of Israel.