A slightly different version of this article was published at The Algemeiner on November 8, 2021.

At a recent event on October 29, a number of student groups at the City University of New York (CUNY) laid out their ongoing campaign that purportedly targets the tax-exempt status of a number of Jewish nonprofits — such as the Jewish National Fund (JNF), the Hebron Fund, and Regavim.

However, the mask quickly came off, as panelists revealed their ultimate aim: to demonize and ostracize proud American Jews.

The event was moderated by Students for Justice in Palestine (SJP) CUNY Law member Nerdeen Kiswani. Among the panelists was Suzanne Adely, president of the Marxist and anti-Israel National Lawyers Guild; Missy Risser-Lovings, a CUNY Law professor; and Abdallah Maraka and Sami Hurani, respectively from the anti-Israel groups Christian Peacemaker Teams and Youth of Sumud.

Vitriol and a complete break from objective reality characterized the meeting.

For example, Huraini and Maraka each made a number of statements suggesting they view Jews celebrating holidays and visiting their religious sites as problematic. Maraka, based in Hebron, even lamented the presence of American Jews in the Jewish “settlement” of Hebron (though he conveniently forgot to mention that Hebron was ethnically cleansed of its longstanding Jewish population decades before).

At one point, Adely, referencing the terrorist organization Popular Front for the Liberation of Palestine (PFLP), stated: “There’s nothing criminal about Palestinian resistance. And that’s what we need to normalize, as well.” Baseless accusations of “genocide” and “apartheid” were also frequent.

At one point, Adely claimed “[the Jewish organizations] are using their 501(c)(3) status as a cover for, basically, to commit war crimes.” Even under the most generous, strained anti-Israel interpretation of an already stretched Rome Statute, it’s silly to suggest private donors and nonprofits are “war criminals.”

The idea of taking Jewish non-governmental organizations (NGOs) or American Jews to the International Criminal Court for funding homes in Judea and Samaria is little more than Palestinian Prime Minister Mohammad Shtayyeh’s pipe dream. It would make a mockery of an already widely derided court.

The panelists also readily admitted that a key argument to exclude such Jewish organizations from 501(c)(3) status is nonsense. An earlier “Stop the JNF” campaign — which Adely supported — sent a petition to the IRS which claimed “JNF funds activities … that are both contrary to the public policy of the United States.”

Fast forward and, while making the point that this campaign isn’t really about tax-exempt statuses, Adely rhetorically asked, “Are they [the Jewish NGOs] really violating US policy, though?” The implication, of course, was that they actually are not. Kiswani followed up and praised that point, stating, “You bring up really important points that, especially you know the fact that this is not an aberration of US policy — it actually comports with it.”

But this isn’t really just about tax-exempt statuses, and they admit this. Adely herself acknowledged that revoking the charity status of a group like JNF is “only one piece of that campaign.” They’re being “obviously strategic” in how they go about this campaign, as “there’s sort of a larger, sort of like, you know, political implications for how we go about, sort of, the larger campaign.” Kiswani agreed, highlighting the importance of “our multi-pronged approach, and not just think about it from the legal perspective.”

You see, according to Adely, “a very important component” of these campaigns is activities like “confronting those kind of supporters that were coming in to contribute to their fundraising.”

It’s not just about Israel. It’s not even just about Jewish nonprofits that work in Judea and Samaria. It’s about those individual, uppity American Jews who dare support the right of Jews to live in their ancestral, indigenous homeland. According to Adely, “those that support … and normalize” groups like JNF, “are really conspirators to genocide.”

This is taking two of the most dangerous and common forms of modern antisemitism to a whole new level.

First, it’s dangerously upping the ante of “Zionism is a form of racism.” It’s now about labeling American Jews — who support the equal right of Jews to self-determination in their indigenous homeland — as genocidal, which is the ultimate evil. Instead of just “Zionism is racism,” it’s “Zionists are genocidal maniacs.” Second, it builds on one of the favorite ploys of antisemites: inverting the Holocaust by cruelly and absurdly equating Jews with the Nazis.

It would be easy to just dismiss all of this as the rambling of some unserious extremists. Both Kiswani and Adely, after all, have lengthy profiles on Canary Mission documenting their history of antisemitic behavior. But this would be a mistake.

Consider the backdrop. This was an event held by student groups at CUNY, where the Professional Staff Congress union adopted an anti-Israel resolution condemning “the massacre of Palestinians” without a single mention of Hamas, and where the student government voted against the adoption of the International Holocaust Remembrance Alliance’s definition of antisemitism. 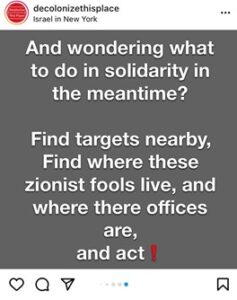 Meanwhile, New York City has undergone years of violent antisemitism, which has only accelerated since May. Meanwhile, amidst the deluge of antisemitic assaults, NYC-based groups like “Decolonize This Place” were openly telling people that the best way to act in solidarity with Palestinians was to “Find targets nearby, find where these Zionist fools live, and where there [sic] offices are, and act!”

What we are witnessing is a growing effort to make it impossible in the United States to be proudly and openly Jewish. And it’s working. A recent study by the American Jewish Committee found that 39% of American Jews changed their behavior over the past year due to antisemitism.

The inevitable conclusion of Adely’s logic would have Jewish children in Hebrew school — who raise money for the JNF to plant trees in Israel — viewed with the same contempt as the Pol Pots and Saddam Husseins of the world.

This isn’t just a campaign to turn the JNF or Israel into pariahs. They also aim to turn American Jewry — the overwhelming majority of whom are proud Zionists — into pariahs.