Despite the recent erosion of public confidence in the media, many readers probably consider journalists trustworthy eyewitnesses. Journalists are duty bound to rise above their personal or national interests and report events impartially.

So, when a news account cites an eye witness who happens to be a journalist, that witness’s testimony carries more weight than that of the average bystander.

But what if that journalist, in his native language, and unknown to the English-reading news consumers, calls for violence against one of the parties to the conflict? What if the source praises terror attacks in which innocent worshippers were massacred during prayers?

Is that alleged eyewitness credible?

These are not hypothetical questions.

On Dec. 11, the Gaza Strip’s Hamas-run Health Ministry reported that four-year-old Ahmed Abu Abed died after he was injured by Israeli gunfire during protests at the border with Israel the previous Friday. Notably, the ministry has a history of placing responsibility on Israel for child fatalities, and then later backpedaling as more information emerges.

Perhaps with that history in mind, the Agence France Presse reported cautiously about Abu Abed: “It was not clear why the child had been taken to the border protests and there was no independent confirmation of the circumstances.”

The Associated Press (“Gaza officials: 4-year-old boy dies from Israeli fire“), for its part, apparently sought to fill in with more information, reporting: “Local journalist Hassan Islaieh [sic] said Tuesday the boy was with this father and dozens of other protesters when he was hit by shrapnel Friday. He says the boy was about 20 meters (yards) from the fence.”

According to Electronic Intifada, Isleih is “a camera operator with Quds TV,” which is Hamas-affiliated. If that’s the case, then Isleih hardly provides independent confirmation of Hamas’ claim. AP did not disclose any information about Isleih’s affiliations, professional or ideological.

A review of his Twitter account reveals that Hassan Isleih openly identifies with Hamas’ political platform and is an anti-Semite who praises terrorists and expresses joy over the murder of innocent and unarmed Israelis.

On Twitter, Isleih praised the perpetrators of the Har Nof massacre, in which five civilians at prayer in a synagogue and a police officer were murdered in November 2015: “The mosques of Gaza announce the Allahu Akbar’ as they bless our people and our Ummah [the Arab Nation/ the community of Muslim believers] with the exquisite act of martyrdom in Jerusalem, there are areas in Gaza and Rafah that distribute candy out of joy due to the event.” (See screenshot below.)

Would the Associated Press consider an Israeli media figure who praised Baruch Goldstein’s massacre of innocent Muslim worshippers a credible source to substantiate an Israeli charge about Palestinian culpability?

Isleih also expressed joy and contentment about the murder of civilians Nehemia Bennett and Aharon Lavie, stabbed to death in Jerusalem’s Old City. Commenting on their October 2015 funerals, he tweeted (screenshot at left): “Wailing and crying during the ceremonies of burial of the Zionists killed in the stabbing attack that was performed yesterday by the martyr and hero Mohannad Al-Halaby #A_Sight_of_Contentment [Literally: #A_Sight_that_Relieves_the_Hearts] – In response to the funerals of civilians Nehemia Bennett and Aharon Lavie.

It’s not just dead Jews which prompt hateful comments from the Gaza reporter. In October 2016, Isleih complained about the number of Jews following him on social media: “I have plenty of comments by Jews in my Facebook page now, on the pictures and the live broadcast of the bombing, the page is now getting many notifications, God help us.” (Screenshot at left.)

Isleih rejects Israel’s legitimacy, referring to it variously with scare quotes (“Israel”) or as the “Zionist entity,” whose journalists are “the enemy’s media.”

It’s no surprise, then, that he also denies Jewish history, tweeting in May 2018: “The alleged [emphasis added; CAMERA Arabic notes: in Arabic it is a regular addition to the word “temple” to imply it never really existed] ‘Temple Organizations,’ so-called, are calling their supporters to participate, in unprecedented numbers, in a storming into the blessed Al-Aqsa mosque to commemorate the so-called ‘Anniversary of the Unification of Jerusalem’ (the Naksa).” Palestinian propagandists often characterize peaceful Jewish visits to the Temple Mount as “storming the mosque.”

In recent days, Isleih tweeted a call to violence, writing: 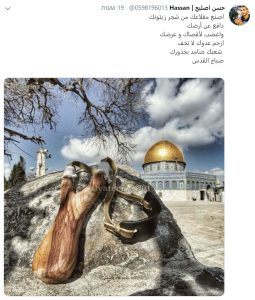 Make your sling out of your olive trees

Grow angry on behalf of your Aqsa and honor

throw stones at your enemy, don’t be afraid …

While AP editors may not deem any of this information relevant to the journalist’s credibility, their readers very well may.

A journalist’s credibility is further complicated by the fact that unlike other professions, such as law or medicine, there are no formal professional criteria to qualify as a journalist. As a result, even terrorists can – and have – falsely claimed to be journalists.

When media outlets deny their readers transparency about their sources, news consumers are right to be wary of the credibility of journalists cited as eyewitnesses.

With research and translations by CAMERA Arabic.