For the second time this year, CAMERA’s Israel office prompts correction of an Associated Press article which wrongly used the term “Palestine.” Yesterday’s article, about a Hamas delegation’s visit to Iran’s Supreme Leader Ayatollah Ali Khameini, originally carried the following headline: “Iran’s supreme leader vows not to give up on Palestine.” Likewise, the first paragraph uses the “Palestine” terminology in violation of AP’s style:

Iran’s supreme leader was quoted Monday as saying during a meeting with a delegation from the Palestinian militant group Hamas that his country won’t give up its stand on Palestine.

As CAMERA has noted in the past, references to the West Bank or to Palestinian-controlled territories as “Palestine” is not consistent with AP usage, and is misleading. In the context of yesterday’s article – the pledge of Iran’s leader who refuses to recognize Israel and who calls for the state’s elimination – the term “Palestine” apparently refers not just to the West Bank but also to Israel in any borders. This usage, too, is obviously not consistent with AP standards. 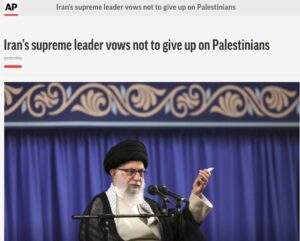 In response to communication from CAMERA, AP editors commendably amended both the headline and the article. The amended headline now reads: “Iran’s supreme leader vows not to give up on Palestinians.” Similarly, the revised first sentence states:

Iran’s supreme leader was quoted Monday as saying during a meeting with a delegation from the Palestinian militant group Hamas that his country won’t give up its stance in support of the Palestinians.

In a separate shortcoming, AP’s story yesterday about the Hamas visit to Tehran fails to note that much of the international community regards the organization as a terror group. The omission is particularly glaring in light of a different AP story also published yesterday which is careful to note the view of much of the international community. That article (“Israeli group says West Bank outposts boom under Trump“) reports in the third paragraph:

Most of the international community considers Israeli settlements in the West Bank illegal under international law and an impediment to a two-state solution to the conflict.