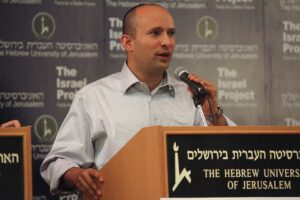 All too often, Christian news outlets that have historically downplayed or ignored Palestinian violence against Israel, work assiduously to highlight Israeli and Jewish violence in the Holy Land. One egregious example of this tendency appears in an article about Israeli Prime Minister Naftali Bennett published in the Dec. 1, 2021 issue of Christian Century The article originally appeared on CC’s website on Nov. 15, 2021. It reads in part as follows:

One area the prime minister, for all his pragmatism, has failed to address is the settler violence against Palestinians on the West Bank. A relatively small section of settlers harass and attack Palestinians, unprovoked and for no reason, preventing them from shepherding their flocks or tending to their fields. While the settlements exist in defiance of international law, Bennett and others refer to these areas by their biblical names, as a way of claiming them for Israel. And the violence there—which is largely supported by the army and the border police—stands in the way of Israel creating a meaningful political solution to its current crises. Bennett and his coalition partners have yet to even acknowledge this issue.

The article, written by Mordechai Beck, CC’s go-to journalist when covering issues about Israel, makes several errors of fact.  He falsely states that “Bennet and his coalition partners have yet to even acknowledge” the issue of settler violence. Wrong.

In fact, Israeli Defense Minister Benny Gantz spoke about the issue in mid-October, 2021. Both The Jerusalem Post and the Times of Israel reported that Gantz spoke about the issue. On October 14, 2021, more than one month before Beck’s article was published on CC’s website, both papers reported that Gantz, one of Bennett’s coalition partners, called on the IDF to deal with attacks against the Palestinians “systemically, aggressively and uncompromisingly.” Yet, one month later, CC posted an article on its website declaring that the people governing Israel — “Bennett and his coalition partners” — have yet to even acknowledge the issue. Gantz is minister of defense and a member of the coalition Bennet leads.

Beck editorializes by declaring   the attacks were “unprovoked” and took place “for no reason.” How would he know this? After all, he ignores the fact that numerous attacks – including deadly ones—were perpetrated by Palestinians against Israeli settlers over the past few years.

For example, Israelis were shocked by the murder of Esther Horgan in December, 2020 while she was running near her home in Tal Menashe in the West Bank. Ironically, CC never covered this killing, which had a profound impact on the mood of Israelis.

More recently, Israelis have witnessed displays of Nazi symbols on numerous occasions over the past few months, a car-ramming attack in early October. Additionally, Palestinians have been throwing rocks and Molotov cocktails at cars and buses in the West Bank.

Omitting facts like these deprives CC readers of the information they need to fully understand the context in which Israeli citizens live and in which Bennett is called to govern. While most Israelis are sickened by attacks on Palestinian civilians, Palestinian leaders have lauded and celebrated attacks on Israeli civilians and the Palestinian Authority has a policy of paying salaries to the families of Palestinians convicted of terror attacks. In 2016, at the height of the stabbing intifada, which terrorized Israelis, a majority of Palestinians told pollsters they supported a continuation of knife attacks. For a useful summary of polling data regarding Palestinian support for violence, please go to this section of the Jewish Virtual Library. All of this information, which Beck omitted from his article, undermines his assertion that settler harass and attack Palestinians “unprovoked” and “for no reason.”

Why is CC omitting this context from its reportage on conflict in the Holy Land?