On Sunday morning, Netanyahu’s only comment about the rallies, which drew thousands in Jerusalem and in Tel Aviv, was to repeat the conspiracy theory that the Wexner Foundation, an American philanthropy, is funneling Epstein money to former Israeli Prime Minister Ehud Barak, which he is using to “organize the protests.”

In both instances, to back up her claim that Netanyahu “said” that Epstein money is going towards the protests, Tarnopolsky hyperlinked to this Netanyahu tweet, which she helpfully translated from Hebrew. Netanyahu tweeted (Tarnopolsky’s translation): 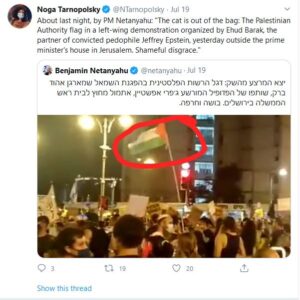 The cat is out of the bag: The Palestinian Authority flag in a left-wing demonstration organized by Ehud Barak, the partner of convicted pedophile Jeffrey Epstein, yesterday outside the prime minister’s house in Jerusalem. Shameful disgrace.

Netanyahu’s tweet did not mention a single word about money, funding, or Wexner. All he said was that the demonstration was “organized by Ehud Barak, the partner of convicted pedophile Jeffrey Epstein.” The rest is Tarnopolsky’s extrapolation, not what “Netanyahu said,” as the article erroneously claims.
Second, elsewhere in the Daily Beast article, Tarnopolsky makes the patently false claim that “Netanyahu used emergency powers acquired to impose the nationwide corona quarantine to shutter the judiciary and the Knesset, Israel’s parliament, a measure never before seen in Israel, not even in wartime, and postponed the start of his trial by two months.”
Netanyahu did not close the courts. Rather, his ally, then Justice Minister Amir Ohana, curtailed court activity.
Haaretz reported:

In the very early hours of Sunday, Israeli Justice Minister Amir Ohana announced that emergency measures will be put in place to counter the spread of coronavirus, affecting the workings of Israel’s courts. Ohana later said that the decision to postpone the [Netanyahu] trial was made solely by the judges on the panel set for the trial, “without any involvement” by politicians.
According to the announcement, court activity will be frozen except for urgent hearings.

In a March 21 press release, Supreme Court Chief Justice Esther Hayut clarified that the courts continue to function throughout the country, providing essential services to the public. Her statement emphasizes that the courts are not closed, and adds: “The reduced activity of the courts due to the Coronavirus crisis until now – and everything necessary will be done in the future as well – to ensure that everything first and foremost will be carried out according to her opinions and decisions.”
The Financial Times previously corrected the false claim that Netanyahu shut down the courts.
Netanyahu likewise did not shut down the Knesset, using “emergency powers acquired to impose the nationwide corona quarantine” or by any other means. In mid-March, then-Knesset speaker Yuli Edelstein of Likud adjourned the Knesset from Wednesday to Monday. AsHaaretzreported, the background was the new government’s inability to form committees which government parliamentary activities.
The Daily Beast article was reproduced at France 24 without any attribution.
CAMERA contacted Daily Beast editors to request correction of these factual errors, including the fabricated statement falsely attributed to the Prime Minister. Stay tuned for any updates.