Yankees relief pitcher Mariano Rivera was inducted into the Baseball Hall of Fame recently. To the ordinary observer, this probably wouldn’t appear to be an opportunity to bash Israel and spread half-truths and distortions about it.

Sports writer Robert Silverman wrote a July 21 column originally titled, “Inside Baseball Hall of Famer Mariano Rivera’s Secret Far-Right Politics,” illustrated with a photoshop-created image of Rivera standing on a blue and white kippah on top of an Israeli flag. 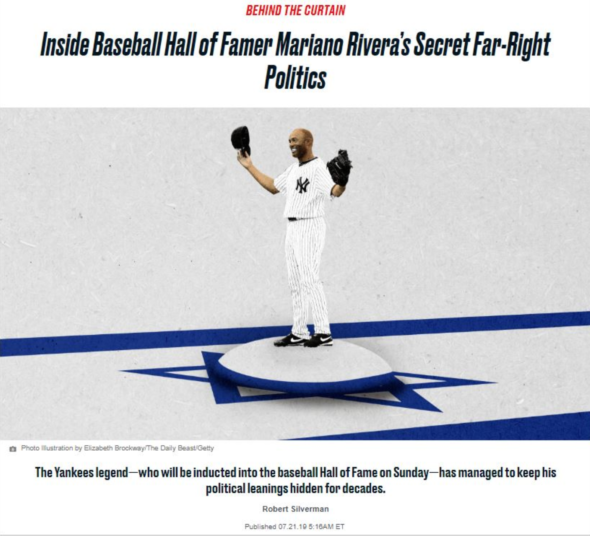 In addition to attacking Rivera for his support of Israel, which the article originally called an “apartheid state,” Silverman also attacked him for his Evangelical faith and his … um … support for the Special Olympics. Yes, really.

Several commentators have addressed the attack on Rivera’s faith, and the worst elements of the piece – the graphic, the title, and the “apartheid” slur, have been edited out (though the original title remains in the article’s url). Several misrepresentations about Israel, however, remain.

Silverman repeatedly asserts context-free claims to make it appear as though Israel is wantonly and habitually killing Palestinians for no reason. He claims, for example, that “Israeli soldiers killed at least 60 Palestinian protesters in Gaza and injured thousands more.” His link indicates he is referring to events from May 14, 2018. Silverman omits that 50 of these so-called “protesters” were, by Hamas’s own admission, its members, and that they were attempting to breach the border between Gaza and Israel, with the stated purpose to “tear out their [Israelis’] hearts from their bodies.” Even Silverman’s own source explains, in the first paragraph, that “Palestinians reportedly rushed the border,” and that the IDF fired on those attempting to cross it, but he ignores that.

Since Hamas took control of Gaza in 2007, it has recklessly used civilians, including children, as human shields for its terror attacks. Silverman, however, puts forth the claim that “500 civilians were killed by an extensive bombing campaign in 2014,” with absolutely no context, completely ignoring the fact that Israel was fighting a war in which Hamas was using hospitals and schools to launch hundreds of rockets at Israeli civilians. His claim that “in 2018 alone, 290 Palestinians –55 of which were minors – died at the hands of Israeli security forces,” is similarly deceptive. During the 2018 and 2019 “March of Return Protests,” Hamas bussed civilians to the border between Gaza and Israel while its operatives attempted to breach that border. As with all Hamas operations, it was inevitable that civilians would suffer and be killed. The blame for these deaths lies squarely with Hamas, which intentionally and consistently puts Palestinian men, women and children in harm’s way. To Silverman, however, it’s Israel’s self-defense that is objectionable.

Silverman further claims that “in May 2019, the IDF killed a 17-year-old Palestinian medic,” as if this simply happened spontaneously. In the article that Silverman himself linked to, it is reported not only that the IDF “said troops were responding to a ‘violent riot,’” but also that “at his funeral, Muzher [the deceased teen] was pictured wearing a headband of the Popular Front for the Liberation of Palestine terror organization, while those in attendance waved the group’s flag.” The PFLP is a terror organization perhaps best known for its airline hijackings.

It’s also noteworthy that he refers to Israel’s current government as “far-right.” This was a stealth-edit to replace his earlier characterization of it as “apartheid.” To support this contention, Silverman links to an article about a 2017 UN report calling Israel an “apartheid regime.” But the UN itself withdrew that report, saying that it had been published without the proper authorization.

Earlier this year, Prime Minister Netanyahu appointed Israel’s first openly gay cabinet minister. In 2016, he publicly condemned those who opposed Jerusalem’s Pride parade, and urged all Israelis to “stand in solidarity with our brothers and sisters in the LGBT community.” In 2015, his government adopted and implemented an NIS 15 billion (approximately $4 billion) five-year plan to increase funding for housing, education, and infrastructure for Israel’s Arab community. His government has sent Israelis on disaster relief missions throughout the world. If this is “far-right,” it’s hard to imagine what, in Silverman’s opinion, would be “center-right.”

His bias is betrayed, if not by any of the above, then by the nonsensical accusation of “sportswashing,” which presumably is on par with “pinkwashing” and “veganwashing” in egregiousness. Claims that Israel “washes” its treatment of Palestinians with strong records on LGBT rights, availability of vegan food, or sports stars are simply conspiracy theories.

Finally, Silverman laments that “unyielding support for Israel is so commonly accepted across the majority of the U.S. political spectrum.” This may be the only accurate thing about Israel in his article. This month the US House of Representatives passed a resolution condemning the movement to boycott, divest from, and sanction Israel by a wide, bipartisan majority.

Perhaps next time Silverman should stick to reporting batting averages.