One day after the Israeli army cited a malfunction in Palestinian weaponry as responsible for the death Saturday of 14-month-old Seba Abu Arar and her aunt Falestina Abu Arar, rejecting Hamas’ charge that they were killed in an Israeli airstrike, Haaretz‘s English print edition told only Hamas’ side of the story.

Twenty-three Palestinians, including two pregnant woman, were confirmed dead by Gaza authorities as a result of retaliatory Israeli airstrikes.

In contrast, the Hebrew print edition states in the very first paragraph of the parallel article (“Palestinians: 19 Gazans killed in strikes in Gaza, among them a four-month old baby girl and a 12-year-old” page 7): “The IDF claims that according to intelligence information in its hands, the two were killed from an explosion of Hamas ordinance.”

In addition, the same page carries a brief item dedicated to the army’s denial of responsibility (“IDF spokesman: Baby and aunt killed from an explosion of Hamas ordinance and not from Israeli fire”).

Although CAMERA notified Haaretz about the publication of the unfounded claim which failed to include any Israeli response, editors did not publish a clarification in the print edition. 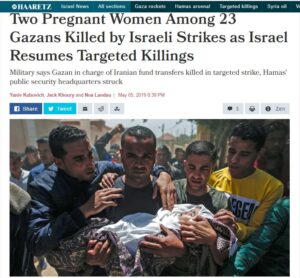 Separately, the digital version of the same article originally carried a headline that stated stated as fact that Israeli airstrikes killed 23 Palestinians, including two pregnant woman, among them Falestina Abu Arar. The headline was: “Two Pregnant Women Among 23 Gazans Killed by Israeli Strikes as Israel Resumes Targeted Killings.”

Following CAMERA’s complaint, the headline was amended but hardly improved. As of this writing, it reads: “Two Pregnant Women Among 25 Gazans Killed as Israeli Pounds Strip, Resumes Targeted Killings.” While technically correct, the headline is grossly misleading. While the Abu Arars, including the pregnant Falestine, were killed during the time period that Israel was launching retaliatory airstrikes on the Gaza Strip, the two were not killed in a strike. Uninformed readers would reasonably deduce otherwise. 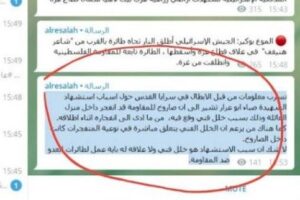 Meanwhile, yesterday reports emerged yesterday that Islamic Jihad allegedly acknowledged that one of their rockets killed the Abu Arars, and that its officials paid the family compensation money, compelling them to stay quiet about the circumstances of their relatives’ deaths.

See “Haaretz, Lost in Translation” for more instances in which the English edition omits or downplays instances of Palestinian violence or wrongdoing which had been reported in the Hebrew edition.