June 3, 2010 – The Cleveland Plain Dealer today published an inflammatory political cartoon by Jeff Darcy that turned truth on its head by portraying those on the Gaza flotilla as innocent peace seekers and demonizing Israel as the culprit responsible for destroying the prospect of peace.

Contrary to Darcy’s suggestion, those on the Gaza flotilla were not peace activists seeking co-existence and extending an olive branch. Israeli soldiers came under attack by violent anti-Israel provocateurs whose purpose was to break the blockade and allow the importation of weapons or weapon-making materials to Hamas. The attacks were planned in advance and included live fire on the Israelis. The soldiers were equipped with paintball guns to disperse crowds. They carried sidearms for use in an emergency, and these were used only when they came under attack and feared for their lives. The evidence for this is on tape. (See here)

While political cartoonists are not, of course, bound by literal facts, and are given leeway to express their opinions pictorially, Darcy’s image is completely false and deceptive. It does not reflect current events, but propagandist talking points, and is thus less a commentary on politics than one on Darcy’s apparent animus toward the Jewish state. 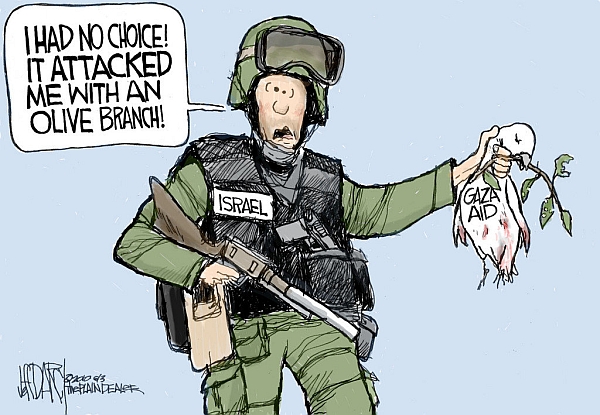 CAMERA immediately alerted its Ohio members to this deceptive cartoon. According to the newspaper’s ombudsman, the cartoon drew 160 online comments; many passionate letters to the editor, four of which were printed in the June 6th Forum section; and lots of e-mails to Editor Susan Goldberg, Editorial Page Editor Elizabeth Sullivan and others.

Editor Susan Goldberg acknowledged that cartoons “are very powerful weapons. They can convey a message in an instant. They have the most ability to project at a glance, and the least opportunity for subtlety. They grab readers’ attention with a quick scan, but they often lack the context and perspective you can put in a story.” As a result, the newspaper conceded, “great care must be taken with the volatile images at the cartoonist’s disposal.” (Read the ombudsman’s column here.)