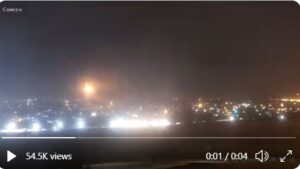 Rocket fired from the Gaza Strip towards Israel, April 24, 2021 (Screenshot of video by Dadi Fold, via IDF Twitter)

In response to communication from CAMERA’s Israel office, DPA commendably corrected all of the captions in question. They now correctly state: “Palestinian militants in the Gaza Strip fired several rockets towards Israel in the recent days, in the worst escalation of the violence between the two sides in a while.”