On April 21, Fatah, the ruling Palestinian party, published a threatening video inciting against Israeli journalists, and the largest organization representing journalists internationally has yet to voice any concern. 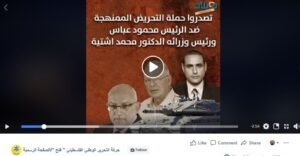 Fatah’s video accuses the three of “incitement” against the Palestinian Authority’s leadership and calls them “Israeli war generals masquerading as media people.” It describes Ben-Menachem as an ” Israeli intelligence officer who later became a journalist”; it casts Berger as a “military journalist” who probably “had served in an internal-security apparatus”; and seeks to discredit Ya’ari as someone who is “close to circles of government and holds right-wing views.”

Why has Fatah targeted these particular journalists? Fatah accuses them of “spearheading” a “systematic campaign of incitement” against the Palestinian Authority’s leadership amid the fight against the coronavirus. The three had, in fact, reported about  Palestinian incitement against Israel, in particularly the completely baseless charge that the Jewish state deliberately spreads the coronavirus among Palestinians.

In other words, factual reporting on the part of Israeli journalists about Palestinian incitement against Israel prompted Palestinian officials to launch a campaign demonizing the Israeli reporters who were doing their jobs. A veteran journalist who frequently works in the Palestinian territories told CAMERA: “This type of incitement endangers the lives of journalists. By calling journalists ‘war generals’ [Palestinian President Mahmoud] Abbas’ Fatah is actually giving a green light to Palestinians to attack the journalists.”

The campaign also has wider consequences, including imposing a “chilling effect” that will deter other journalists who work in the West Bank, including foreign correspondents.

Nasser Abu Baker and the International Federation of Journalists

Fatah’s recent incitement recalls the story of Nasser Abu Baker, a reporter for Agence France Presse covering Israeli-Palestinian affairs, who, in his additional role as chairman of the Palestinian Journalists’ Syndicate, led a boycott campaign against Israeli journalist. (In 2016, Abu Baker, while he was an AFP journalist, also ran for a seat on the Fatah Revolutionary Council.)

In addition to those two positions, Abu Baker also served (and continues to do so) in the executive committee of the International Federation of Journalists (IFJ), the world’s largest organization of journalists, represents more than 600,000 media professionals in some 140 countries.

In late 2016, Nasser Abu Baker was a delegate to the Fatah Congress and also ran in the elections for Fatah’s revolutionary council. In response to concerns raised by CAMERA about the egregious conflict of interests involved in covering affairs in which he takes an active political role, AFP responded with a mild sanction: Abu Baker was suspended from his job for a week. IFJ railed against the AFP, and urged its members to join the condemnation. IFJ did not condemn or even comment on the campaign that Abu Baker led against Israeli journalists and against Palestinian journalists and officials who dared not to boycott them.

Has IFJ changed its ways since then? A review of the organization’s website reveals an abundance of condemnations against Israel based on allegations supplied by the Palestinian Journalists’ Syndicate. Yet, given that the chairman’s past record includes a run in Fatah revolutionary council elections and the spearheading of a threatening campaign against Palestinian journalists who didn’t boycott their Israeli colleagues, the organization cannot be considered a credible source.

There’s no wonder, therefore, that the IFJ had not yet responded to the Fatah’s recent incitement campaign against Israeli journalists. The organization, whose stated goal is to project journalists around the world, has neither issued a statement nor taken any known action against Fatah’s video targeting the Israeli journalists.

Is there any point in developing expectations from the IFJ?

IFJ’s profound silence is event more striking in light of the fact that less than a year ago, in June 2019, the IFJ praised the stated commitment of the Palestinian Prime Minister, Mohammad Shtayyeh, to the safety of journalists. The IFJ’s General Secretary Anthony Bellanger maintained that “we are always ready to do our best to support this process.”

Despite all of the above, the IFJ did not consider it appropriate to comment on Fatah’s video inciting against Israeli journalists, calling them “war generals” and accusing them of anti-Palestinian incitement simply because they did their work and reported facts about the Palestinian leadership.

As of this writing, the IFJ has failed to respond. Stay tuned for any updates.

To see this post in Hebrew, please visit Presspectiva.