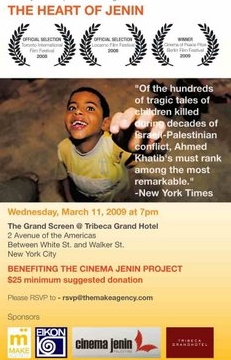 Heart of Jenin (2009)
PBS Wide Angle Series
Produced and directed by: Leon Geller and Markus Vetter
English
51:17
Too many documentary films exploring the Israeli-Palestinian conflict have been disappointing  because they tend to fall back on a tiresome one-sided depiction of bad Israelis and victimized Palestinians. Heart of Jenin, which aired on PBS on July 8, 2009, promised to be different because of  the unique  topic it explores. The film tells the story of a Palestinian father’s decision to donate the organs of his son, who, while brandishing a toy gun, had been shot by Israeli troops after they mistook him for a terrorist. The film records Ismail Khatib’s poignant encounters with the Druze, Beduin and Jewish families whose children received the organs.
Ultimately, Heart of Jenin falls short of its promise by hewing to a narrow story line that omits crucial context. The entire story of Ismael Khatib’s humane decision to donate his son’s organs could not have taken place without the intercession of Israeli doctors and medical staff, the unseen heroes, who continue to administer critical care to individuals on both sides of the conflict despite the risks. The film ignores this reality and instead focuses on the contrast between the apparent callousness of the Jewish recipient’s father and the benevolent, forgiving Palestinian donor’s father. As a result, the film reinforces antagonistic views rather than offering new insight into the conflict.
Heart of Jenin’s producers, Leon Geller and Marcus Vetter, deserve praise for selecting the story of Ahmed Khatib. Sadly, they missed an opportunity to humanize both sides of the Israeli-Palestinian conflict. In a genre dominated by formulaic portrayals of bad Israelis and blameless Palestinians, context is urgently needed. Public television viewers and audiences at film festivals are routinely served up reminders of Israeli intrusions into the lives of residents of the West Bank and Gaza. Rarely are they exposed to the more positive instances of Israeli-Palestinian coexistence. They are denied images of West Bankers and Gazans receiving care in Israeli hospitals and clinics. This largely untold story could have figured in the film. It is only within this broader context of  Israeli medical facilities providing services to all sides that the story can be properly understood.
The film could have acknowledged that Israeli hospitals continued to offer their lifesaving medical services to Palestinians even as terrorists in some instances targeted Jewish medical personnel serving them. The killing of children like Ahmed Khatib is a tragedy. But so was the murder of  Dr. Shmuel Gillis in 2001, who provided medical services to Arabs and Jews. As was the murder of  Jerusalem Emergency room doctor David Appelbaum, who trained Jewish and Muslim doctors, before being blown up by a suicide bomber along with his daughter, the evening before her wedding in 2003.
Then there is the incident involving Wafa al-Bis, a young Gazan woman who attempted to blow up the Israeli medical clinic that had previously saved her after she had suffered critical burns in a cooking accident. Her story represents the absolute moral opposite of Khatib’s, but is equally important to understanding the complex relationship between Israelis and Palestinians.
The story of Wafa al-Bis is most significant to understanding the checkpoint scene in Heart of Jenin. A recurring theme in many films about the Israeli-Palestinian conflict is the ostensibly oppressive presence of the security barrier — or “apartheid wall” — as it is known to its harshest critics. Rarely is an adequate account provided as to why this barrier was built. The image of the barrier and the cold bureaucratic conversation taking place between the border guard and a remote official offends viewer sensibilities because the reason for Khatib’s visit is such a humane one. Although, the filmmakers  provide historical background during the film’s introduction, in the checkpoint scene, no explanation is offered as to why such unpleasant procedures are necessary.
Checkpoints came into being as a response to demands by Israel’s citizens that the government do something to stop suicide bombers from penetrating Israel from the West Bank at a time when normal life in Israel was being made impossible. It was diligent, no-nonsense guards at a checkpoint at the Gaza border that stopped Wafa al-Bis, an innocent looking 21 year old woman with a concealed bomb, from murdering the doctors and nurses who had nursed her back to health.

Another reason context is sorely needed is the sharp contrast between Ismael Khatib’s noble gesture and the seemingly grudging appreciation expressed by Yakov Levinson,the father of a young organ recipient. When viewing the film for the first time, Yakov Levinson comes off as captive to his anti-Arab prejudices even though his daughter’s life has been saved. Comments by film reviewers and viewers on various web sites confirm this impression.

But further consideration of  Levinson’s responses brought out a different perspective. Levinson appears uncomfortable in front of the camera and unaccustomed to the spotlight. His words betray little forethought. The prejudices he inadvertently expresses are of the sort that can be found among any group. He is an ultra-orthodox Jew whose lifestyle is largely alien to most western viewers. This disconnect between the film makers and Levinson emerges in several places.

For example, when asked whether he would want his children to be friends with an Arab, Levinson replies he would not, “its not the way we want them to grow up.” His wife explains that they would not be a good influence on their children. The implication is that this is an expression of Israeli Jewish prejudice against Arabs. But ultra-orthodox Jews like the Levinsons often seek to limit their exposure to all outside influences that conflict with their insular lifestyle. While Levinson’s lack of tact is jarring, he is expressing a common preference for seeking friends among those who share the same lifestyle and heritage. His statement that he would have preferred the donor be Jewish also betrays a jarring narrow-mindedness, but is not indicative of hatred, as some reviewers and commenters on the film charge.

A similar misunderstanding occurs later when Khatib’s uncle mentions the difficulties of finding good work in Jenin and Levinson suggests Ismail Khatib look for work in Turkey or London. Khatib takes offense to this suggestion because it appears to deny his attachment to the land. But both Israelis an
d Palestinians in the tens of thousands have found it advantageous to go abroad in search of better jobs. In normal circumstances, such advice should give no offense, but under the particular circumstance it once more comes off as insensitive.

Levinson’s comments about “crazy Arabs” always trying to kill them contrast badly with Khatib’s generous act of giving life. But it is a valid perception by Israelis, who live under the daily threat of terrorism and rarely experience humanitarian acts like Khatib’s.

Geller and Vetter have broken new ground, but their film repeats the familiar shortcomings of so many films touching on the Israeli-Palestinian conflict. It fails to provide sufficient context so that its Western audiences can truly learn something they didn’t know about the conflict and better appreciate its complexities. By failing to provide this context, the film reinforces existing prejudices.
Donate Now