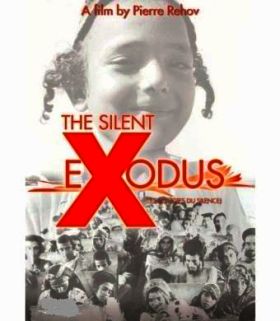 
French filmmaker Pierre Rehov, best known for his expose “The Road to Jenin,” has also produced an excellent film about Jewish refugees, this one entitled “The Silent Exodus.” The 2004 film is largely in French and Hebrew with English subtitles, and it covers much of the same historical ground as “The Forgotten Refugees.” Rehov’s incisive interviews with prominent scholars and survivors of the Arab pogroms vividly convey the circumstances precipitating the departure of entire Jewish communities from their longtime homes.

Rehov interviews Bat Ye’or, the scholar who introduced the concept of “dhimmitude” into the lexicon, on that very subject. She and others outline a number of the degrading prohibitions placed on the dhimmis and recall firsthand the humiliation that Jews felt in these Arab lands for hundreds of years. Colonization brought some relief for Jews, as the yoke of Islamic law was briefly lifted by the colonizing powers, and many Jews sought to become citizens of those European nations.

Rehov is very explicit in illustrating how Arab anti-Semitism preceded and was largely disconnected from Zionism. Using vintage footage and newspaper headlines, Rehov discusses both the connections between the Muslim Grand Mufti of Jerusalem and Adolf Hitler, and the role of the pro-Nazi regime that ruled in Iraq during the war. After the war, Iraq, as well as Egypt and Syria, provided safe havens for Nazi war criminals.

After the U.N. Partition Plan for Mandate Palestine of November 1947, Arab countries used Zionism as a pretext to launch oppressive, Nuremburg-like measures against Jews. Persecution of Jews became state policy in places like Egypt, Iraq, Libya, Morocco, and Yemen. Vintage photography and dozens of survivors attest to the murder, rape, and pillage that became commonplace in the Jewish quarters of these countries. When a number of Arab countries declared war on Israel in 1948, they created both the Palestinian Arab refugee and made refugees of one million Jews living in Arab lands who were forced to leave their homes.

Unfortunately, leaving was not easy. In Syria, for example, Jews attempting to leave the country were imprisoned, tortured, and killed. Egyptian Jews were speedily expelled from the country, in accordance with recently passed laws that declared them enemies of the state, but not before the government confiscated all their assets. Numerous survivors recounted how they could bring only what they could carry with them, and often not even that. Nonetheless, Jews continued to flee at an alarming rate, leaving behind billions of dollars in confiscated and nationalized assets and the lives they had built for themselves for years. Rehov’s interviews and vintage footage leave no doubt as to the trauma precipitating these Jews’ departures and their hardships in exodus.

Pierre Rehov’s riveting documentary raises a number of important issues about the legacy of these Jewish refugees. The Jewish refugees never sought to exploit their refugee status for political gain, nor did they choose to embrace a culture of victimization. They only looked to the future and to creating new lives for themselves in Israel and other places.

Unfortunately, this praiseworthy attitude is one reason the story of this silent exodus and these forgotten refugees has been lost to history. There is also an institutional barrier to appropriate redress. In Rehov’s film, Yusuf Hassan of the U.N. High Commission on Refugees says that these Jews do not qualify as refugees because, in his opinion, they left of their own free will and accord. This either represents shocking ignorance or a shameful and willful indifference to their plight.

All is not lost, however. A coalition of major Jewish organizations from around the world has begun the International Rights and Redress Campaign (IRRC), slated to kick off in earnest in November 2006. This educational campaign seeks public recognition of the wrongs committed against Jews in Arab countries and aims to catalogue the mass violations of human rights and confiscations of assets. In May of this year, House Resolution 848 and Senate Resolution 494 were introduced to Congress with bipartisan support and were seen as widely supportive of the IRRC’s efforts.

There are two refugee populations involved in the Arab-Israeli conflict, and it is ridiculous to seek justice for one without even acknowledging the plight of the other. The IRRC and these films are a good first step towards educating the world about one of the largest refugee populations ever created.