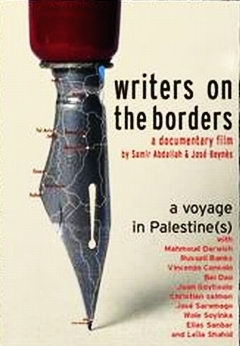 Writers on the Borders (2004)
Directed by Samir Abdullah and Jose Reynes
Arabic, French and Hebrew with English Subtitles
80 minutes

Writers on the Borders, commissioned by the International Parliament of Writers (IPW) and directed by two anti-Israel activists is essentially a propaganda film designed to inflame public opinion against Israel. The film likens Israel to the South African apartheid state, compares Israelis to Nazis and presents Palestinians as the tragic, blameless victims of Israeli brutality. Shamefully, the filming of Writers on the Borders coincided with the most violent period of Palestinian suicide bombings against Israel. Two days after the filming concluded, 30 mostly elderly Jews were slaughtered in a terrorist attack as they celebrated the Passover Seder. Seven victims were Holocaust survivors.

There is no pretense of balance in this production. As IPW President and trip participant Russell Banks wrote, “we were not concerned with public relations and felt no particular need to appear ‘evenhanded’ in our inquiry.” This is unsurprising coming from a group whose partisan politics are made clear in its publication, Autodafe, and which counts Palestinian activist Mahmoud Darwish as one of its co-founders. An IPW “Appeal for Peace in Palestine” published in Autodafe exemplifies the organization’s one-sided perspective with the following distorted introduction that implicitly blames Israel for Palestinian violence and terrorism:

There is a war going on in Palestine. It is not a war between the armies of two enemy nations but between one of the most powerful armies in the world and an occupied land….

…Once again, one yields to the illusion of the complete power of military action, of the total destruction of the enemy, although the use of these means only gives rise to a spiral of indiscriminate violence and reprisals…

…Again this illusion of one people and its homeland, the myth of an ethnically-pure nation, the insane logic of apartheid…

The film directors, Samir Abdallah and Jose Reynes, are founders of the International Civil Campaign for the Protection of the Palestinian People (ICCPPP), an organization whose mission is to sway Western public opinion against Israel. The group, established in 2001, organizes “missions” to the West Bank and Gaza for sympathetic writers, academics and activists from around the world. The trips are carefully coordinated by Palestinian organizations and anti-Israel activists who present a distorted picture of Israeli policy. Participants are urged to spread their “findings” through articles, interviews and films, to promote divestment initiatives, and to directly take part in other anti-Israel activities. (While ICCPPP presents itself as a “humanitarian” organization, two French members were expelled from Israel on suspicion that they had links to British born suicide bombers who killed 3 people in a Tel Aviv pub. [Le Monde 5/21/03])

The film follows a delegation of writers from the IPW on a visit of several days to fellow IPW member, Mahmoud Darwish. Darwish is a Palestinian poet whose extreme views are evident in his poem “Passing Through Passing Words”:

Take your names and get out
Don’t pass among us like flying insects
Take your bony skeletons
Collect your illusions from abandoned holes and get out
It’s time to get out
Reside where you will, but not among us
Die where you will, but not among us
Ours is the past here
And the present and the future
Ours is the world here
So get out of our soil
Our earth, our sea
Our wheat, our salt
Our everything
Get out of all memory
And remove with you, your dead.

Scenes of Palestinian homes in ruins and Israeli tanks on alleged Palestinian private lands are interspersed with barely audible clips of Darwish’s poetry readings to Palestinian audiences, and statements by members of the IPW delegation expressing solidarity with the Palestinians and contempt for Israel.

Most shocking and outrageous are the words of Portuguese writer, Jose Saramago, who compares Israel’s occupation to Nazi actions at the Auschwitz concentration camp where 1.5 million Jews and 100,000 other people were gassed to death. Saramago knows the effect on Jews of this odious Nazi comparison and, when confronted by an Israeli, readily admits he was trying to provoke a response.

It was later reported that in the filmed meeting where he made this statement, Amira Hass, a pro-Palestinian Israeli journalist and child of Holocaust survivors, asked him directly whether there were any gas chambers in Gaza. Saramago replied, “I hope this is not the case. There are so many things being done that have nothing to do with Nazism, but what is happening is more or less the same.” More recently, in a speech he gave in Brazil, Saramago is reported to have said that the Jews no longer deserve any sympathy for the Holocaust.

Upon his return from the IPW trip – just three weeks after the Passover Seder terrorist attack – Saramago expressed more venom against the Jews and Israel in the popular Spanish newspaper, El Pais:

…contaminated by the monstrous and rooted ‘certitude’ that in this catastrophic and absurd world there exists a people chosen by God and that, consequently, all the actions of an obsessive, psychological and pathologically exclusivist racism are justified; educated and trained in the idea that any suffering that has been inflicted, or is being inflicted, or will be inflicted on everyone else, especially the Palestinians, will always be inferior to that which they themselves suffered in the Holocaust, the Jews endlessly scratch their own wound to keep it bleeding, to make it incurable, and they show it to the world as if it were a banner. Israel seizes hold of the terrible words of God in Deuteronomy: ‘Vengeance is mine, and I will be repaid.’ Israel wants all of us to feel guilty, directly or indirectly, for the horrors of the Holocaust; Israel wants us to renounce the most elemental critical judgment and for us to transform ourselves into a docile echo of its will.

Theodore Dalrymple, a noted psychiatrist and writer for The Spectator and American quarterly City Journal, wrote a scathing critique of Saramago’s comments (City Journal 4/12/2002). He observed:

A man who compares the travails of a people with Auschwitz is not so much drawing attention to their plight as to the supposed depth of his compassion for them: a much m
ore important matter in his own estimation. It is not a sign of generosity of spirit: it is a sign of self-absorption and egoism. It is the frivolous use of the murder of millions for small personal advantage.

Dalrymple’s assessment of Saramago could well apply to the group as a whole. Many of the writers draw upon their own societies’ colonial experiences to condemn Israel.

American writer Russell Banks compares the Israeli occupation to the Euro-American treatment of Native Americans. Delayed at an Israeli checkpoint, Banks expresses his disgust with the Israeli soldiers, sarcastically commenting that they are “doing their job real well.” He displays no concern with the rampant Palestinian terrorist attacks that have prompted the delay, ignoring the effectiveness of checkpoints in stopping suicide bombers from carrying out attacks against Israeli civilians. While he describes Israeli security measures as “a grotesque form of violence” to which he can find nothing comparable, he makes no such statement about Palestinian suicide bombing.

Afrikaaner Breyten Breytenbach compares the Israeli occupation to South African apartheid, and is venomous in his characterizations of Ariel Sharon. Quoting from an open letter he wrote to Sharon, the author disparages Sharon as a racist, and accuses him of using “bloodshed and humiliation” to subjugate the Palestinians. He accuses Sharon of being a “war criminal” and uses crude metaphors to insult him. He then attempts to insulate himself from potential criticism of his biased views by proclaiming that any criticism of Israel is unfairly stifled by accusations of anti-Semitism.

French writer Christian Salmon relates Israeli policy to French colonialism. Referring to Israel’s Defense Forces, he states that “an occupying army that commits such acts has lost any claim to legitimacy…colonial history has shown it has already lost the war.”

About Yasir Arafat, the father of modern terrorism, Chinese poet Bei Dao sentimentally rhapsodizes that he was a “hero in my eyes” and remarks admiringly that Arafat still held to the ideals of his earlier years, a reference to his activities as leader of the PLO.

Throughout the film, the writers express horror at the poverty of the Palestinians, the Israeli tanks patrolling streets, Israeli-imposed restrictions on Palestinian movement, and the long delays at checkpoints.

While the poverty they witness shocks them, they seem unaware that the standard of living for most Palestinians was far lower prior to Israeli control and is comparable or superior to that of much of the Arab world. And while they lament the fate of the Palestinian refugees, they make no attempt to explore why they have remained refugees for 54 years, preferring instead to cast the blame on Israel. Arab responsibility for rejecting the original UN division of Palestine in 1947 and for actively opposing Israeli measures to resettle Gazans in permanent housing, for example, are completely ignored.

Likewise, there is no discussion of Palestinian terrorism or the inculcation of hatred toward Israel and Jews in general within the Palestinian population and surrounding Arab states. The delegation prefers instead to single-mindedly condemn Israel and smugly project their own distorted historical analogies upon the situation.

No matter the circumstances, the writers interpret everything as the fault of Israel. Thus, a Palestinian shooting attack on an Israeli patrol (in which 4 Israeli soldiers were killed) is described as an “excuse for Israeli action.”

The ICCCP/IPW mission was successful in fulfilling its goal of spreading a distorted perspective on the Israeli-Palestinian conflict to the world; after returning from their trip, the writers disseminated their views widely in various influential newspapers and journals. They authored articles that appeared in the Nation, the Guardian, El Pais, Le Monde, Corriere dell Sera, Liberation, and various literary reviews, as well as being featured in major Arabic media, such as al-Ahram.

One may wonder how anyone could imagine this type of mission and film promoting peace between Palestinians and Israelis. What purpose can be served by the inflammatory words of a Saramago or Breytenbach? Regrettably, in fact, the writers of IPW and the film’s producers appear not to be interested in conflict resolution but rather in acting as outside provocateurs who incite hatred of Israel.

Writers on the Borders may be useful as a study in bias and propaganda; but it is not even remotely an informational “documentary.”