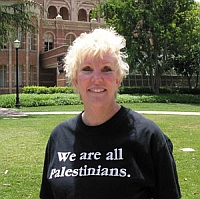 Greta Berlin is a 68-year-old, anti-Israel activist and media professional from Los Angeles, CA. In university, she majored in mass communications and theater arts. Her training and professional career as a media and presentations coach have provided her with the skills and experience to manipulate the media in the interest of furthering her radical anti-Israel activities.

Berlin began her long career of anti-Israel agitprop after her marriage to a Palestinian man and the birth of their two children in the 1960’s. In 2003, she joined the International Solidarity Movement, working as a media officer. She also joined Women in Black In 2006, she co-founded the Free Gaza movement which claims its mission is to “pressure the international community to review its sanctions policy and end its support for continued Israeli occupation.” She runs the movement’s media initiative.

Berlin displays extreme animus toward the Jewish state, successfully using the media to publicize her outright distortions and anti-Israel agenda. Her support of Hamas is evidenced by comments justifying the group (see below) and this Aug. 28, 2008 photograph of a meeting between Berlin’s “Free Gaza” movement and Hamas leader Ismail Haniyeh. (Berlin was part of that group pictured below.) 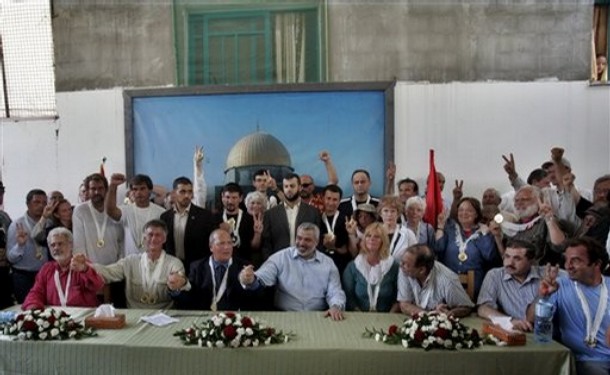 Below are just some examples of Berlin’s outrageous statements to the media:

“On September 29, 2000, Mohammed Al Dura, a little 12-year-old boy in Gaza was murdered by an Israeli sniper. Someone just happened to catch the killing on video.” (Counterpunch, June 7, 2007)

While there is debate over whether or not the entire Al Dura incident was a publicity hoax, it is undebatable that he was not and could not have been shot by Israelis. ( See “Mohammed Al Dura: Anatomy of a French Media Scandal“)

“The world is busy starving the Palestinians of Gaza into submission, simply because they exercised their human right to vote democratically for the party they wanted in power. I find it obscene that, just because the US, Israel, the EU don’t like the party’s goals, they are suddenly called ‘terrorists.’ (Radio Free Europe, Aug.13, 2007)

Hamas is considered a terrorist organization because it targets civilians– non-combatant men, women and children with suicide bombings, as well as rocket and mortar attacks.

About American aid to Israel:

Americans give foreign aid to Israel in order “to occupy, kill, starve, humiliate and drive out a native population in favor of white European colonists.”  (Radio Free Europe, Aug.13, 2007)

About the purpose of the illegal flotilla actions:

“The only illegal presence in the area is Israel… This mission is not about delivering humanitarian supplies, it’s about breaking Israel’s siege…” (May 27, AFP)

About  the Israeli response:

Note how the story changes over time and how Berlin spins the results, shifting the details of her story as more facts are exposed about what was apparently pre-planned violent actions by flotilla members:

“We’ve gotten confirmation…that [the Israelis are not bringing the flotilla] to Ashdod because they know all the journalists are there. They’re coming into Haifa so you need to make sure that [your reporters] are in Haifa to cover this as well.”(ibid.)

“Before their feet hit the ground, [the Israeli soldiers] they started firing into the crowd…  [The flotilla members] have been murdered by a force that showed up with machine guns”and shot people that had on backpacks and blue jeans.” (Al Jazeera, May 31)

“People had the right to defend themselves against soldiers armed with machine guns.” (LA Times, May 31)

“If there were weapons [on the ship], [Israel] planted those weapons.” (Radio Free Europe/Radio Liberty, June 1)

“What’s certain is that we won one of the battles — and we won the diplomatic day.” (AFP, May 31)

“I do think that Israel is becoming ostracized among the world community the way South Africa was.” ( Radio Free Europe/Radio Liberty,June 1)

“The world is watching a county [Israel] imploding, having a massive nervous breakdown in full view. ” (Diary update, Free Gaza.org)