In response to communication from CAMERA’s Israel office, Haaretz‘s English edition today amended a subheadline which irrelevantly reported that a suspected arsonist had been a resident of a West Bank facility while simultaneously omitting the salient fact that she had just escaped from a mental institution.

The headline and sub-headline stated: “Israeli Suspected of Arson as Firefighters Battle Jerusalem-Area Blaze: Resident of West Bank settlement arrested after blaze breaks out near Beit Shemesh, weeks after a mega-fire devastated parts of the Jerusalem Hills.”
As the article itself states in the second paragraph: “The suspect had escaped a mental institution, according to police.” 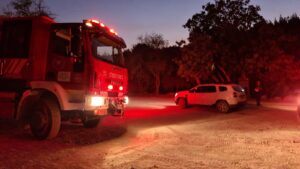 Clearly, the fact that the woman is mentally ill and escaped from a mental institution is much more relevant to the suspected arson than her previous place of residency in a West Bank settlement.
Indeed, following communication from Presspectiva, CAMERA’s Hebrew site, Haaretz‘s Hebrew edition commendably amended its headline Friday to state: “Fire breaks out in Jerusalem hills: A woman who escaped from a secure institution is suspected of the arson.”
Shortly after receiving an email from CAMERA today, editors commendably amended the English subheading to state: “Israeli woman who escaped a mental institution arrested after blaze breaks out near Beit Shemesh . . .”