Ha’aretz regularly reports on demolitions of Palestinian homes by the Israeli administration and presents its readers with a grim picture of destruction and misery among the Palestinians. In fact, a reader who believes Ha’aretz’s news accounts, trusting that the newspaper actually adheres to journalistic norms of objectivity and accuracy, would be appalled by the situation described.

But Ha’aretz does not follow such journalistic norms. Take for example, Amira Hass’ July 21, 2010 report, entitled “IDF destroys West Bank village after declaring it military zone.” It provides a clear demonstration of how facts can be manipulated through distortions and omissions to present a false picture of events.

Here is a summary of Haas’ article: Israel’s civil administration demolished the homes of 120 men, women and children, who lived and worked – some for decades – in the Jordan Valley village of Farasiya. Before destroying the village, the civil administration cut off the inhabitants’ water supply and forbade the residents to use other water wells in the area belonging to the Mekorot Water Company. But this is not an accurate account of events.

First, there is no registered village in the West Bank called Farasiya. It does not appear in either the census data of the Palestinian Authority or that of the Israelis. What Hass neglected to inform readers was that this was an illegal encampment which, like dozens of illegal settlements and hundreds of illegal buildings throughout Israel, was slated for demolition.

Second, the campsite was just a seasonal one for herding sheep. (There are dozens of such encampments throughout the Judean desert and the Negev which, like the encampment in question, are abandoned for most of the year.) The majority of residents who inhabited this encampment have permanent homes in the nearby (and recognized) villages of Tubas and Taysir. According to the civil administration, on the day that the eviction order was presented, June 27, 2010, and on the day of the demolition itself, three weeks later, the encampment had already been abandoned.

Third, the encampment was erected in a live firing zone.
Instead of providing readers with the crucial information explaining the reason for the abandonment of the camp – namely, that it was just seasonal and its inhabitants had already returned to their permanent homes – Hass quoted a man calling himself the popular committees’ coordinator in the Valley who claimed that the families were forced to leave because the civil administration had cut off their water supply. Had Hass bothered to clarify the transient, haphazard nature of this encampment, which had no infrastructure for running water, readers might have understood why a pirated hookup to the Israeli Mekorot water supply to siphon water into the campsite would be deemed illegal by the authorities.

The photograph below shows the “Farasiya encampment before it was demolished. No water pipes, electricity, or access roads exist, and it is clear that it could only have served as a temporary campsite. 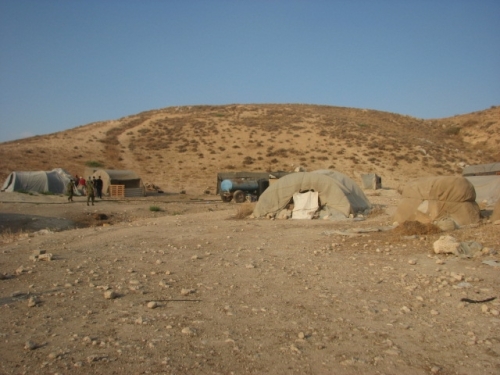 But Hass was apparently not content to merely mislead readers about the nature of the”village.” She also attempted to amplify the extent of the demolition. She thus reported that “about 55 structures” were demolished when in fact 10 tents and a single tin structure were razed. (This is the reason why “eviction orders for 10 families in tents” were delivered, according to the civil administration’s claim reported in the article.) In the English version of the article – although not in the original Hebrew version – the count of 55 was reached by including “clay ovens, sheep pens and bathrooms.”

Moreover, Hass implied that the civil administration not only demolished homes but also wiped out the residents’ livelihoods by demolishing industrial structures. She thus described one of the demolished buildings as “a packaging warehouse that was built together with Agrexco in the late 1970s.” But this was apparently false.

Presspectiva (CAMERA’s Hebrew-language department) contacted the CEO of Agrexco, who denied that any of its packaging warehouses were demolished. The CEO referred to Hass’s allegation to that effect as “a total falsehood.” And the civil administration spokesperson similarly denied having demolished or even having “encountered any sort of warehouse or any equipment that indicated such a facility exists in the area.”

As to Hass’ contention that some of the residents “have been living in Farasiya for decades,” the civil administration spokesperson called this “a bald-faced lie,” maintaining that the oldest tents were only two years old. Hass, however, ignored this conflicting claim, reporting as fact that this had been the home of some residents for decades. And, needless to say, she provided no source.for her disputed allegation.

According Hass’ report, the IDF declared the area a “live fire zone” as a pretxt for preventing Palestinian communities from growing. But in fact, the “Farasiya” seasonal campsite was erected in a firing zone – an area closed to civilians because it was unsafe. Firing ranges exist on both sides of the Green Line, and not only is building forbidden in those areas, they are completely closed to civilians in general, for fear of their safety. Of course, had the IDF not enforced this regulation and had an innocent Palestinian been injured or killed by a stray IDF bullet during training in that area, no doubt Hass and her editors would have expressed outrage.

So what is this story really about?

With articles like this, Ha’aretz  flaunts its disregard for basic journalistic integrity to create a false reality which fits its world view. The article has already spawned dozens of outright anti-Semitic responses on the internet and  has already been reposted by several other anti-Israel websites.