CAMERA’s Israel office prompted correction at Haaretz Friday after the English edition misleadingly referred to Palestinians residing “for generations” in Masafer Yatta, a disputed area in the southern Hebron hills.

The English version of the June 16 (page 2, and online here), “Army resumes raids of W. Bank villages for ‘intel mapping.’” had initially reported:

Last month, the High Court of Justice approved the eviction of some 1,000 Palestinians from the eight villages, after a two-decade legal dispute over land that has been repurposed by the Israeli army as a firing zone, and where Palestinians have lived for generations. (Emphasis added.) 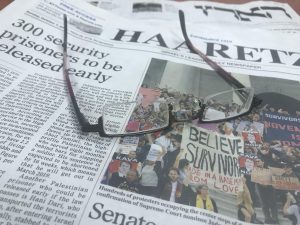 Israel’s High Court rejected the claim that Palestinians had lived there permanently before it was declared a firing zone. See page 17 of the (Hebrew) ruling.

The court found that Palestinians did not reside there as permanent residents (as opposed to seasonal) when the area was declared a firing zone in the early 1980s. This is the crux of the case because the law allows the military to designate land for military use if it is not permanently settled.

The residents’ legal wrangling dates back only to 1997. (The court ruling provides all of the details of the legal history.) In other words, the area was a firing zone until then with no legal action on the part of the Palestinians. Moreover, as noted in page 17 of the ruling, the air force used the aerial area for attack drills until 1993, a fact which reinforces the fact that there could not have been permanent residents living there at the time.

In addition, page 8 of the ruling notes that some of the appellants have permanent homes in Yatta, a key point which further erodes the appellants’ case given that the law does not protect temporary residents against the firing zone designation.

In its decision late on Wednesday the High Court said the villagers “failed to prove” their claim to permanent residence before its declaration as a training zone.

Thus, Haaretz‘s characterization of the designation of the land as a training zone as “repurposing” is inaccurate given that the land was not zoned for residency.

The Hebrew edition did not contain the inaccurate claim about Palestinian residency for “generations.” In addition, the Hebrew article more precisely referred to the declaration of the training area, as opposed to repurposing of land. It states (CAMERA’s translation):

Over the weekend the IDF mapped villages in the southern Hebron Hills, though last year it stated it would stop this practice. Six of the eight villages of Masafer Yatta were involved, whose eviction the High Court approved last month in the area declared a military training zone.

Last month, the High Court of Justice approved the eviction of some 1,000 Palestinians from the eight villages, after a two-decade legal dispute over land that has been declared a firing zone by the Israeli army.

The amended text no longer contains the inaccurate reference to Palestinians residing there “for generations.” It also substitutes the precise language, “declared a firing zone” in place of “repurposed.” In addition, an editorial note appended to the bottom of the article clarifies:

Editorial note: The text has been amended to clarify that the High Court of Justice approved the eviction of Palestinians from the Masafer Yatta area which has been declared a firing zone by the Israeli army.

For more instances of “Haaretz, Lost in Translation,” in which misinformation published in the English edition had not appeared in the Hebrew counterpart, please see here.