A subsequent news analysis by Jack Khoury, who also wrote the initial report, contained an ostensibly major scoop. According to Khoury, Hamas significantly changed its attitude to the conflict with Israel, and no longer rejects the two-state solution. Khoury wrote (“Palestinians Have Heard Enough Empty Talk of Unity,” July 3):

Jibril Rajoub, Fatah Central Committee’s secretary general, and Salah al-Aruri, head of the Hamas political bureau, may have used slightly different terminology in their remarks, but their message was similar: Annexation for them would eliminate any diplomatic option for an agreement with Israel. 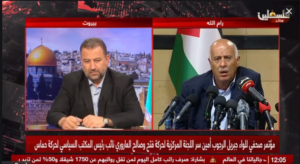 From left: Saleh Al-Arouri and Jibril Rajoub at the joint press conference

According to Khoury, Hamas not only accepts the idea of an agreement with Israel, but also believes it should be achieved peacefully and nonviolently. He added:

Over the past decade, the sides [Fatah and Hamas] have pledged  to establish a Palestinian state within the 1967 borders [and] to wage a nonviolent popular struggle…

Plans for renewed nonviolent activity with the goal of establishing a Palestinian state within the 1967 borders, on the basis of the 2002 Arab peace initiative, have existed for years. Such activity would include women and children blocking roads in the West Bank or a peaceful march toward a military base.

Did Hamas really take a sharp turn in the last decade, forsaking its long-held commitment to liberate Palestine in its entirety, from the river to the sea, with blood and fire?

The answer is unequivocally no.

“It is an impractical initiative,” Foreign Minister Mahmoud Zahar told The Associated Press in an interview at the end of a Sino-Arab Cooperation Forum hosted by Beijing on Thursday.

Hamas’ 2017 General Principles and Policies platform, which did not cancel the organization’s charter calling for Israel’s elimination, clearly stated that the two-state solution is a temporary state of affairs, a tactical move towards the end goal of Israel’s demise:

Hamas believes that no part of the land of Palestine shall be compromised or conceded, irrespective of the causes, the circumstances and the pressures and no matter how long the occupation lasts. Hamas rejects any alternative to the full and complete liberation of Palestine, from the river to the sea.

Hamas’ 2017 platform clearly specifies by what means that goal should be attained:

Resistance and jihad for the liberation of Palestine will remain a legitimate right, a duty and an honor for all the sons and daughters of our people and our Ummah.

Khoury’s deceitful depiction of last week’s joint Fatah-Hamas press conference is even more striking in light of remarks by Salah al-Arouri, head of Hamas’ political bureau, at the event. Al-Arouri equated the current situation to the one on the eve of Ariel Sharon’s ascension to the Temple Mount in September 2000, after which the second intifada erupted. Al-Arouri added:

We paid a heavy price, but it brought about important achievements, first and foremost Israel’s departure from Gaza and the beginning of the dismantlement of the settlements in the West Bank.

If there is any lingering doubt about Hamas’ intention, one need only listen to the words of Mahmoud Al-Zahar, the terror group’s co-founder and minister of foreign affairs, in a July1 interview to Lebanese TV channel al-Mayadeen on Thursday: the goal is to destroy Israel and render it empty of Jews:

Hamas member Mahmoud al-Zahar makes it clear that Fatah and Hamas joint opposition to the Trump deal,is actually the beginning of the war to destroy the State of Israel, and “clean” it from Jews

Presspectiva, CAMERA’s Hebrew site, asked Jack Khoury on what basis he reported that Hamas has moderated, accepting the two-state solution and a peaceful, negotiated agreement with Israel. As of this writing, he has yet to respond.

Translated from the Hebrew original by Shlomi Ben Meir.