A headline in Haaretz‘s English edition Friday cast a new rule targeting the practice of polygamous families fraudulently gaining rights to buy more than one building lot as discrimination against Bedouin women. Thus, the page four headline stated: “New rule will make it harder for Bedouin women to buy land.” 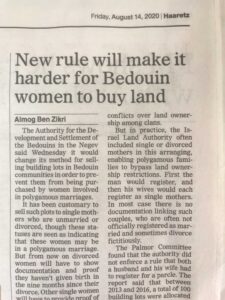 But more diligent readers who make it beyond the misleading headline into the accompanying article by Almog Ben Zikri learn that the rule in question is directed at preventing polygamous households from obtaining multiple building lots, not at preventing Bedouin women from buying land.

Israel’s Authority for the Development and Settlement of the Bedouins in the Negev said Wednesday it would change its method for selling building lots in Bedouin communities in order to prevent them from being purchased by women involved in polygamous marriages.

It has been customary to sell such plots to single mothers who are unmarried or divorced, though these statuses are seen as indicating that these women may be in a polygamous marriage. But from now on divorced women will have to show documentation and proof they haven’t given birth in the nine months since their divorce. Other single women will have to provide proof of their circumstances as well. . . .

Since 2007 the Israel Land Authority has been authorized to allocate land parcels in Bedouin communities to married men aged 18 and up whose families live with them. The rule was said to seek to avert conflicts over land ownership among clans. 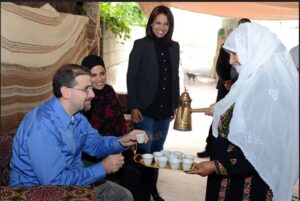 But in practice, the Israel Land Authority often included single or divorced mothers in this arranging, enabling polygamous families to bypass land ownership restrictions. First the man would register, and then his wives would each register as single mothers. In most case there is no documentation linking such couples, who are often not officially registered as married and sometimes divorce fictitiously.

The Palmor Committee found that the authority did not enforce a rule that both a husband and his wife had to register for a parcle. The report said that between 2013 and 2016, a total of 100 building lots were allocated to single and divorced women with children.

The ILA, based on its statement Wednesday, intends to make Bedouin women registered as single to reveal the name of the father of their children in order to obtain an exemption, i.e., obtain the right to a lot. She will forfeit the exemption if it turns out that the father already received a lot. A divorced woman who gave birth within nine months after her divorce would also be disqualified. Any Bedouin woman who challenges the an assumption she is married will have her exemption reviewed.

The online edition carried a markedly better headline which at least indicated that polygamy was the new rule’s target. It states: “Seeking to Limit Polygamy, Israel Makes It Harder for Bedouin Women to Buy Land.” The subheadline further clarified: “Women will have to provide proof of their status to show they’re not in a polygamous marriage.”