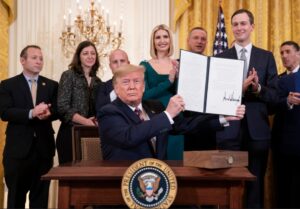 In his Dec. 16 column, Bisharat makes clear his distaste for the order, which calls for consideration of the International Holocaust Remembrance Alliance definition of antisemitism when identifying evidence of discrimination. The Haaretz writer considers the widely-accepted IHRA definition  “an extreme interpretation of anti-Semitism” (“Trump and the West Seek to Put All Jews in the Pro-Occupation Basket“):

Something terrible is brewing in the West, including the United States. Last week President Donald Trump signed an executive order that adopts a broad and controversial definition of anti-Semitism that includes certain types of criticism of Israel…

Bisharat is not entitled, however, to fabricate about the contents of the order, as he does later on in the column when he insists that the definition bars all criticism of Israel, contradicting his initial accurate reference to “certain types of criticism of Israel.” He invents:

These resolutions grant Israel near-total immunity from any criticism… It’s difficult to find a historical precedent for this type of immunity. What other country enjoys, or has ever enjoyed, such a privilege? Only Israel is given this dubious privilege: Don’t touch its precious occupation.

If Bisharat’s assertions are correct, then it would be a total violation of the freedom of speech and academic freedom.

But that is not the case. Fist, the International Holocaust Remembrance Alliance’ working definition of anti-Semitism does not prohibit criticism of Israel, nor does it grant Israel any special privilege. In fact, it states explicitly:

Manifestations might include the targeting of the state of Israel, conceived as a Jewish collectivity. However, criticism of Israel similar to that leveled against any other country cannot be regarded as antisemitic.

IHRA’s specific examples of criticism of Israel which do fall under the working definition include:

Accusing the Jews as a people, or Israel as a state, of inventing or exaggerating the Holocaust.

Denying the Jewish people their right to self-determination, e.g., by claiming that the existence of a State of Israel is a racist endeavor. …

Applying double standards by requiring of it a behavior not expected or demanded of any other democratic nation.

Using the symbols and images associated with classic antisemitism (e.g., claims of Jews killing Jesus or blood libel) to characterize Israel or Israelis.

Drawing comparisons of contemporary Israeli policy to that of the Nazis. Holding Jews collectively responsible for actions of the state of Israel.

Moreover, the Dec. 11 executive order itself states that this definition is not legally binding, but the relevant authorities “shall consider” it in their decisions. It doesn’t mention Israel at all. It deals with protection of Jews from discrimination and harassment, according to the American Civil Rights act.

And finally, the executive order explicitly states that it may not be employed to violate freedom of speech:

In considering the materials… agencies shall not diminish or infringe upon any right protected under Federal law or under the First Amendment.

Odeh Bisharat can breathe a sigh of relief; criticism of Israel will not vanish from the American academy.

See Presspectiva for the Hebrew version of this post.