In response to communication from CAMERA, The Los Angeles Times yesterday clarified that the Sheikh Jarrah real estate dispute involves dozens of Palestinians facing eviction after failing to pay their rent, not "several hundred." See below for a detailed update.

In the last two days, The Los Angeles Times, whose recent coverage of Israel consisted mostly of Associated Press stories, ramped up its pace of coverage by enlisting several veteran correspondents. The journalists' combined years of experience, however, don't translate into careful, accurate coverage of recent volatile events in Israel and the Gaza Strip.

In today's article, for instance, Dina Kraft and Laura King report ("Israel and Gaza militants on the brink of all-out war," page 1, and online here):

Targets in Gaza included a 13-story building where Hamas had a civilian office, which collapsed after multiple strikes. Israeli drones first fired warning shots at the structure’s roof — a “knock” to warn those within to quickly exit — and no casualties were reported in that bombardment, although it sent terrified civilians fleeing, dodging falling debris.

In fact, according to Agence France Presse, the office served top Hamas commanders.

In Gaza, people sifted through debris after an Israeli air strike destroyed a 12-storey building.

Hamas, which controls the Palestinian territory, said the tower block had been a residential building. AFP reporters said it also houses offices of several Hamas officials.

Hamas and the Islamic Jihad group confirmed they had commanders who had died in the Israeli strikes.

About the organization said to house a "civilian office" in the toppled building, The Los Angeles Times fails to inform readers that it is a designated terror group.

Deliberately or not, the journalists similarly cover for the organization by failing to note that that a large percentage of the rockets that the terror group has launched at Israel reportedly fell in the densely populated Gaza Strip, which it rules.

200 of those rockets exploded inside Gaza neighborhoods

About the devastation in the coastal territory, today's article states:

Gaza, an impoverished and densely packed seaside territory of 2 million people, to which nearly all access is controlled by Israel, was pocked by Israeli airstrikes, some only blocks or yards apart. The roar and clatter of hundreds of outgoing rockets fired by militants mingled with amplified chants from mosque loudspeakers, promising victory and vengeance. …

“Everyone is running away in the street — you feel as if you are running from certain death,” said 29-year-old Ayman Mohamed, who lives near the toppled tower.

Certainly, the Gaza Strip is a horribly scary and dangerous place at the moment. But while Israel's military warns civilians, giving them a chance to flee before striking Hamas targets embedded within the civilian population, Hamas and Islamic Jihad do not extend any such consideration to their own brethren. Hamas endangers their own civilians by launching rockets from residential areas with no warning, despite the estimated 20 percent fail rate in which the rockets hit Gaza territory. Surely this self-imposed risk factor is at least as newsworthy as Israeli airstrikes.

In addition, the reporters omit coverage of violent attacks by Palestinians in Jerusalem. They report:

Moreover, this outbreak of fighting — coupled with violent tactics employed by Israeli police against Palestinians in East Jerusalem, and the use of stun grenades and rubber bullets on Monday at the Aqsa Mosque compound, home to one of Islam’s holiest shrines — threatened to create a grave rupture between Israeli Jews and Palestinian citizens of the country, who make up about a fifth of its population of 9 million.

There is not one word about the violence employed Monday by Palestinians on the Temple Mount, including throwing rocks and targeting police with fireworks, which prompted the use of stun grenades and rubber bullets.

While there can be differences of opinions as to whether the police handled the situation properly (critics could argue that the police used either too much or too little force), there is no justification for news reports that ignore the circumstances which led to the use of stun grenades and rubber bullets.

Another veteran Los Angeles Times reporter put on the task is Tracy Wilkinson. In her article today, she falsely alleges ("News Analysis: Biden struggles To respond to Israeli-Palestinian violence after Trump refused to criticize Israel"):

In recent days, the White House and State Department have expressed “serious concerns” about Israeli plans to evict several hundred Palestinians from their homes in East Jerusalem to make way for far-right Jewish settlers.

The allegation that "several hundred" Palestinians face eviction from their homes is sheer fabrication. The court case in question, according to the anti-settlement organization Peace Now, concerns just seven families, totaling 31 individuals, not "several hundred." And, despite Hamas' preferred narrative, there are no "Israeli plans" (as in government) to evict these individuals. Rather, the private landowners brought the case to the courts.

To the contrary, Israeli police have arrested Jews who attacked Arabs, not given them free rein. As Haaretz reported ("Six Arrested in Jerusalem for Attacking Arab Pedestrians"):

According to witnesses, the suspects were walking around the city center asking people questions and trying to find out if those who answered had an Arabic accent. The suspects then attacked those who were presumed Arabs.

Also, as reported by The Jerusalem Post, the police deployed to keep far-right Lehava extremists away from Arab crowds:

Israel Police deployed throughout the city to tackle the foot traffic and in an attempt to prevent the violence. The goal of the police throughout the night was to keep the two groups as far away from each other as possible.

Police forces successfully broke up some of the protests, warning the protesters – numbering in the hundreds – beforehand, starting to push them towards Highway 1.

Meanwhile, Wilkinson reports, "Israel also restricted Palestinian access to the hilltop site," although more than 90,000 nevertheless attended prayers there on Saturday night, with extremist Palestinians among them chanting, "Strike Tel Aviv," and "In spirit and in blood, we will redeem Al Aqsa." While Wilkinson cites "extremist Israeli settlers," she doesn't mention these Palestinian extremists. And while she notes restrictions on Palestinian access to the Temple Mount, she neglects to report that Jews were completely barred from the site, Judaism's most sacred place. (Of course, she ignores the Temple Mount's status as Judaism's holiest site, but does note that it's the third holiest site in Islam.)

As for her analytical record, it's worth recalling that one week before Bahrain signed on to the Abraham Accords, Wilkinson glibly proclaimed that the Trump administration had come up empty-handed in its efforts to entice more Arab countries to normalize with Israel.

Today's news analysis is somewhat of an indictment of the Biden administration for not being more involved in the Israeli-Palestinian issue. "There are no bypasses to the Israel-Palestinian conflict resolution," Wilkinson concludes the article by quoting a former Israeli negotiator.

The powers that be at The Los Angeles Times also realized that a big story is unfolding in this corner of the Middle East that they can't afford to sit out. They therefore called in the big guns. It's a pity, then, that the emerging coverage is so shoddy.

In response to communication from CAMERA, The Los Angeles Times yesterday published a prominent clarification at the top of the digital article noting that the Sheikh Jarrah real estate dispute involves the possible eviction of dozens of residents (31, according to Peace Now), not several hundred, as reported. But it also inexplicably adds that the Israeli government has suggested it plans to evict several hundred Palestinians from eastern Jerusalem. CAMERA calls on The Los Angeles Times to either substantiate the claim. If no substantiation is available, an additional correction is in order. Yesterday's clarification states:

5:33 PM, May. 12, 2021: This article mischaracterizes U.S. concerns about Israeli plans to evict several hundred Palestinians from their homes in East Jerusalem. While the Israeli government has suggested that is indeed the plan, the issue that U.S. officials were reacting to involves a single Israeli Supreme Court case on the evictions of several dozen people. 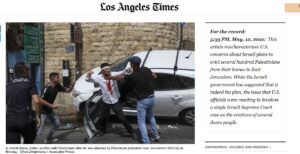