A May 11, 2005 Associated Press dispatch about a Katyusha rocket fired from Lebanon into Israel provided the following “context”:

The Lebanese guerrilla group Hezbollah has occasionally shelled Israeli positions, although the border has been relatively quiet since Israel pulled out of southern Lebanon in 2000.

This passage is fine, except for the words “occasionally,” “Israeli positions,” and “shelled.” Hezballah has launched hundreds, probably thousands, of Katyusha rockets into Israel. The AP itself has in the past described the Katyusha threat in a way that contradicts its current reference to “occasional” attacks:

In Kiryat Shemona – so often hit by rocket attacks such as today’s that some Israelis call it “Kiryat Katyusha” … (AP, 12/23/98)

This passage also highlights other problems with the May 11 AP dispatch: Kiryat Shemona is not an “Israeli position.” It is a civilian town. Hezbollah frequently attacked towns as well as military positions. And the word “shell” seems to suggest a more primitive mortar, whereas Hezbollah relied heavily on Katyushas, which are better described as rockets. 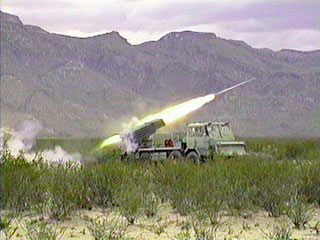 As far as AP’s “relative quiet since … 2000,”  an Israel’s Ministry of Foreign Affairs summary of attacks on Israel since the country withdrew from southern Lebanon suggests that “quiet” might not be the most appropriate word to use:

(This is not the first time AP has minimized Hezbollah’s violence. Click here.)
Donate Now