Credible institutions engage with reality as it is, not as they want it to be. In this sense, Human Rights Watch (“HRW”) is the farthest from a credible institution. Their latest anti-Israel slander demonstrates this point yet again.

On Tuesday, HRW produced yet another attack on the Jewish state, titled “Gaza: Israel’s ‘Open-Air Prison’ at 15.” While it addresses Gaza’s border with Egypt, too, the article reserves much of its harshest language for Israel, painting a cliché picture of Gazan victims at the mercy of bestial Israelis whose only motivation is to deprive Palestinians of their human rights. But it’s a picture that only holds up if one leaves out a slew of inconvenient historical facts.

Rather than address those inconvenient details and convincingly explain why they do not detract from HRW’s conclusions, the organization either ignores them entirely or summarily dismisses them without any adequate explanation.

Some background on the history of the Gaza Strip is necessary.

In August 2005, Israel unilaterally disengaged from the Gaza Strip. All its Jewish residents – some 8,000 people – were forced to leave their homes. Synagogues were dismantled and even the dead were uprooted as Jewish graves were exhumed and the remains moved out of Gaza. Every single Israeli soldier left the territory.

Several months later, the terrorist organization Hamas won a majority of seats during the election for the Palestinian Legislative Council. Tensions between Hamas and the party of Palestinian Authority leader Mahmoud Abbas, Fatah, began to grow. By January 2007, Fatah and PA figures were being abducted, beaten, and executed by Hamas. Then, in June 2007, Hamas launched a military offensive that successfully captured the entirety of the Gaza Strip, effectively expelling the Palestinian Authority from the territory.

“The Palestinian flag was trampled today under the feet of [those] who regard the Palestinian national project – whose banner we have been carrying generation after generation – as opposed to their [own] project of darkness. They have replaced [the Palestinian flag] with their own flag, which is a flag of division…. [Hamas] formulated a plan to split Gaza from the West Bank and to establish an emirate, or a mini-state of one color controlled by a single group of extremists and religious fanatics.”

A few months later, on September 2, 2007, Abbas would issue a presidential decree effectively rendering the Palestinian Legislative Council powerless. Since then, Palestinians have been ruled separately. Those in Gaza are under the thumb of the terrorist regime of Hamas. Those in the West Bank are ruled under the division of powers created by the Oslo Accords between Israel and the Palestinian Authority. Numerous attempts at “reconciliation” between Hamas and the PA have been made. None have succeeded.

Nonetheless, one of HRW’s main narratives is that Israel is intentionally distancing Gaza and the West Bank, treating them differently for some nefarious, underhanded purpose. In doing so, HRW stakes a position even more anti-Israel than that of Mahmoud Abbas, arguing the problem isn’t that Hamas violently took over the Gaza Strip from the PA, it’s that “Israeli authorities issued a formal ‘policy of separation’ between Gaza and the West Bank” for obvious reasons.

Perhaps HRW would have felt better if Israel allowed Hamas to capture the West Bank from the PA, too.

Rather than acknowledge and analyze within this context, HRW pushes these major events and realities aside. In doing so, it crafts narratives that rely on readers being entirely ignorant of history.

Consider some other examples.

Although the report is supposedly about the 15-year anniversary of Gaza being turned into an “open-air prison,” the authors decided to go even further back in time in a curious way. HRW laments that whereas between 2015-2019 an average of 373 Palestinians left through the Erez Crossing, that was “less than 1.5 percent of the daily average of 26,000 in September 2000.”

Why did HRW pick the date of September 2000?

It just so happens that the end of that month, specifically September 29, 2000, is typically cited as the start of the so-called “Second Intifada.” Bloody terror attacks against Israelis were carried out with sickening regularity in the following years, killing over a thousand – the vast majority of them civilians. The death and destruction inflicted by Palestinian suicide bombings only began to abate when Israel began building a security barrier.

None of this is mentioned by HRW. It would be like writing an article about stringent airport security measures in the United States over the last two decades without mentioning the attacks on September 11, 2001.

Much of HRW’s article comes down to trying to depict the border between Israel and Gaza as equivalent to the border between Ohio and Pennsylvania, not one between a sovereign state and a territory dominated by a terrorist group dedicated to its destruction. The article tries to hide this absurdity behind dubious legal claims that Israel still “occupies” Gaza, notwithstanding that not a single Israeli – other than those held hostage by Hamas – is within the territory. 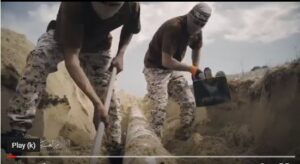 Hamas terrorists digging up pipes in the Gaza Strip.

That’s how we end up with blanket statements like “Israel also controls the…infrastructure upon which Gaza relies,” which sound rather silly in light of images of Hamas digging up sewage pipes in Gaza to turn into rockets meant to kill Israelis.

It’s also how we end up with HRW attacking Israel for not allowing an airport or seaport in Gaza. As far back as 2002, Israel has been intercepting shipments of deadly weapons from the likes of Iran such as those found on the MV Karine A, which was bringing 50 tons of weapons meant to kill Israelis. To allow for an airport or seaport in Hamas-controlled Gaza would be to fully open the floodgates for bad actors like Iran to pour even more weaponry into the hands of terrorist organizations like Hamas and Palestinian Islamic Jihad.

Sure, if Israel controlled the Gaza Strip – as HRW pretends – it could institute more targeted security measures to screen the import and export of goods into and out of such ports of entry and exit. The fact that this would require Israel to reconquer the territory exposes the absurdity of the suggestion that Israel “occupies” and has effective control of the territory. Ironically, if Israel was truly the “occupying power” over Gaza, Article 43 of the 1907 Hague Convention would effectively require Israel to do just that – reconquer the Gaza Strip. Surely, HRW is not advocating for another Israeli military operation.

In short, claiming Israel is the “occupying power” of a territory controlled by an organization dedicated to its destruction is as laughable as claiming that the Iraqi government had effective control of Mosul in 2015, notwithstanding the black flag of Islamic State waving over the city.

All that aside, sovereign states are entitled to decide who and what enters their territory. Moreover, as even the United Nations has admitted, Israel’s blockade of the Gaza Strip, given the extraordinary security threat it faces, is entirely legal.

Reality – with which HRW has a tenuous relationship – can be rather inconvenient and complicated. But if HRW seeks to maintain any shred of credibility as a fact-driven, impartial institution, it cannot simply sweep away these complicating and inconvenient factors in pursuit of a partisan narrative.