Is it “normal” for elderly Holocaust survivors to be murdered while celebrating Passover? That’s what today’s Op-Ed in the New York Times appears to suggest.

The piece, by anti-Israel activist Raja Shehadeh, uses the coronavirus scare as a pretext to attack the Jewish state. The hook is that American cities are ordering people to stay at home to prevent the spread of COVID-19. The pitch is that in 2002, cruel Israelis ordered Palestinians to remain indoors for no reason at all.

Shehadeh strains to squeeze anti-Israel talking points into his ostensible lesson about the coronavirus. (Or is it the other way around?) “Unlike the Israeli guns that posed an equal threat to anyone moving outside of their homes without permission,” writes Shehadeh, “the virus discriminates by age.” He laments Israel’s “strangulating roadblocks.”

The reason for the curfew and checkpoints? Apparently there was none. In what is the piece’s most disingenuous and offensive passage, Shehadeh writes,

In 2002, when my neighbors and I had our movement severely restricted by an Israeli military siege, I tried my best to continue living as normally as I could. It was springtime then, as it is now. I would look out the window and lament my inability to venture out to the lush hills all around covered with wildflowers. But the danger lurking outside my house back then was readily recognizable: armed soldiers enforcing the stay-at-home orders. Only Palestinians were under threat. While we suffered, normal life continued elsewhere, indifferent to what we were enduring.

It is a flagrant distortion of history — a stark example of terrorism denial — to claim that, in 2002, “only Palestinians were under threat” while “normal life” continued in Israel. That year was the single deadliest in history for Israelis in terms of terrorism casualties, as a campaign of Palestinian suicide bombings targeted Jewish civilians. Life was turned upside-down for Israelis, many of whom wouldn’t dare enter a restaurant or city bus. The curfews imposed on parts of the West Bank, which the Op-Ed focuses on, was the direct result of a Palestinian terror campaign, which the Op-Ed dishonesty ignores, that claimed over 400 Israeli lives that year alone. 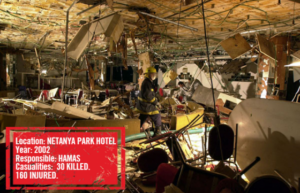 In the time period Shehadeh discusses, a suicide bomber murdered 11 Jewish civilians, including a 5-month-old, a one-year-old, a three-year-old, a seven-year-old, and three other children waiting for prayers to end outside a Haredi yeshiva. At a café across town, 11 more were murdered. Five 18-year-old Jews were shot dead in Gush Katif. A 9-month-old infant was among the dead in an attack along the Mediterranean coast. Seven passengers on a bus were killed by a suicide bomber in the north of Israel. Sixteen Israelis were killed while dining in a Haifa restaurant. And 30 mostly elderly Jews, including Holocaust survivors, were slaughtered while celebrating Passover in a Netanya hotel.

These attacks were in March alone, and represent only a portion of the deadly terror attacks that month. “Normal life”?

It’s one thing for the author to use the coronavirus in the service of anti-Israel activism. That’s his prerogative — though editors might be expected to balk at such cynical treatment of the crisis. But to inform readers that the curfew was arbitrary, that only Palestinians were under threat, and that normal life continued elsewhere is to show an egregious disregard for the truth.