“Why the Unrest in Gaza Might Get Worse,” the June 17 The New Republic article by freelance journalist Dalia Hatuqa is so rife with factual errors and partisan reporting it’s hard to know where to begin. 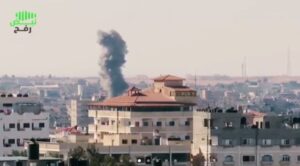 Attack on the house of senior Hamas operative Atallah Abu al-Sabah. All around, buildings are not pulverized (QudsN Facebook page, May 19, 2021)

In her most outrageous, factually-challenged assertion, Hatuqa fabricates: “Gaza was pulverized by an 11-day-long Israeli bombardment in May.” But the facts tell a different story. According to the United Nations, in the last round of fighting last month,”450 buildings in the Gaza Strip were completely destroyed or damaged by missiles.” According to the Palestinian Central Bureau of Statistics (2018), there are 186,156 buildings in the Gaza Strip. In other words, no more than .2 percent of the buildings in the Gaza Strip were damaged or destroyed. (Presumably, additional buildings have been constructed since 2018, driving the percentage down further.) The tiny percentage of buildings affected by the fighting completely belies Hatuqa’s sweeping fabrication that “Gaza was pulverized.”

Hatuqa’s article opens with misreporting, as the very first sentence errs: “Using the discharge of incendiary devices across the wall that hems in the Gaza Strip against the Mediterranean Sea as justification, Israel, under new Prime Minister Naftali Bennett, launched a series of airstrikes in the besieged coastal enclave on Tuesday night.” 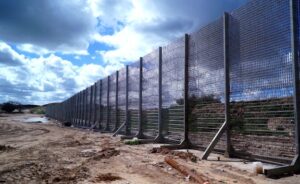 The fence at the Gaza-Israel border (Photo from IDF)

The incendiary balloons that Palestinians from the Gaza Strip launched into Israel prompting more than two dozen fires last week crossed a fence dividing the coastal territory from Israel, not a wall. While an underground wall was constructed to thwart Hamas’ cross-border tunnels,a fence divides Israel and Gaza above the ground. As NPR reported:

On top of the underground barrier, Israel is also building an above ground border fence. The government is installing sensor technology to detect when militants are tunneling close to the border, the military says.

In yet another straightforward factual error, Hatuqa grossly misreports on the chronology of events, stating:

Gaza’s residents lived through another night of terror on Tuesday after helium balloons carrying incendiary devices were floated into Israeli territory. This came after the “Flag Day” march by far-right Israeli groups. . .

In fact, members of Palestinians terror groups in the Gaza Strip launched hundreds of balloons on Tuesday before the flag march, not after. Indeed, Times of Israel reported (“Incendiary balloons from Gaza spark fires in south ahead of Jerusalem flag march“):

Numerous fires blazed in southern Israel near Gaza on Tuesday, with fire services saying at least 20 were sparked by balloon-borne incendiary devices launched by terrorists in the Strip.

According to Fire and Rescue Services, some 20 blazes — mostly small brush fires — broke out in the Eshkol and Sha’ar Hanegev regions immediately adjacent to the Gaza Strip throughout the day, which investigators determined were started by airborne arson attacks from Gaza. The fires were quickly brought under control by firefighting teams from Fire and Rescue Services, the Parks Authority, the Jewish National Fund, the Israel Defense Forces and volunteers from local communities.

Meanwhile, clashes broke out between dozens of Palestinian protesters and IDF troops on the Gaza border amid tensions over a controversial flag march planned for later in the day in Jerusalem. (Emphasis added.)

Let’s get this on the record right now, so there’s no confusion later on: this is happening *before* the flag march set to take place in Jerusalem’s Old City today. https://t.co/He3Dost9Du

Furthermore, Hatuqa conceals who is behind the arson attacks, opaquely referring to the “discharge of incendiary balloons,” and to “helium balloons carrying incendiary devices were floated onto Israeli territory.” She refrains from stating that Palestinian members of terror organizations are the perpetrators.
She again reverses chronology when she refers to the potential eviction of several Palestinian families from Sheikh Jarrah as “the spark that ignited the Israeli bombardment of Gaza last month and saw rockets lobbed on Israeli cities.” But the Palestinian rocket attacks on Jerusalem and southern Israel preceded the Israeli bombardment of Gaza, and were in fact the spark that ignited Israel’s bombardment of Gaza. In plain words, Israel bombed the Gaza Strip last month because Palestinian terrorists fired rockets on hundreds of thousands of Israeli civilians. This is a basic fact that her entire article obscures.

Similarly, the article’s subheading also obscures causation, stating: “This week, Israel bombed the Palestinian territory.” The subheadline contains not a word about the hundreds of arson attacks which caused over two dozens fires and which prompted the Israeli bombing.
In addition, Haquta’s article is marred by a substantive omission regarding the possible eviction of the El-Kurd and other families in Sheikh Jarrah. She conceals the fact that the residents have enjoyed protected tenant status while steadfastly refusing to pay the owners rent, thereby prompting the eviction case. As The New York Times reported in 2010:

In the 1950s, Jordan and the United Nations agency for Palestinian refugees gave 28 refugee families homes there. The families say that Jordan promised them full ownership, but the houses were never formally registered in their names.

In the early 1970s, the Israeli courts awarded two Jewish associations ownership of the compound based on land deeds that were a century old. The Palestinian residents were allowed to stay on as protected tenants on the condition that they paid rent to the Jewish groups.

Rejecting the court ruling, many of the Palestinian families refused to pay rent, making them eligible for eviction.

Furthermore, Hatuqa states as fact that “a reporter for the Qatari Al Jazeera news channel was detained and beaten,” despite the fact that the reporter’s claim that police beat her has not been verified. As the Associated Press had reported:

The reporter, Givara Budeiri, was held for four hours before she was released and sent to a hospital to treat a broken hand. It was not clear how her hand was broken, but her boss blamed police mistreatment.

This analysis touches only on the most glaring instances of Hatuqa’s relentless misreporting. Israel didn’t pulverize Gaza, but Hatuqa sure pulverized the truth.