Pollster James Zogby, who once famously responded with a fit of a rage to a tweet about Israeli hummus, last week paired up with MSNBC’s Ayman Mohyeldin to vent their shared anti-Israel animus with a focus on the day’s topics: coronavirus and Christmas.

Picking up on the narrative embraced earlier by other media outlets such as Associated Press and Washington Post in which Israeli citizens can look forward to a quick rollout of a coronavirus campaign while the Jewish state fails to provide for its ailing, impoverished, occupied Palestinian neighbors, MSNBC’s Dec. 24 broadcast dismisses the fact that under the Oslo Accords, the Palestinian government is responsible for vaccinating its population (“Covid vaccine distribution underway in Israel, Palestinians may wait months“). 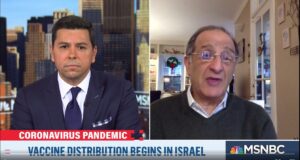 Zogby falsely argues that it is Israel’s responsibility to vaccinate West Bank and Gaza populations, claiming:

International law that governs occupied territories and humanitarian law that governs occupations very specifically stipulate that Israel has, the occupying power, has the obligation to care for the public health, safety and security of the people under occupation. They don’t just have nine million people. There are 15 million under their control. Half of them are Palestinian Arabs. Some are citizens, two million and the other [sic] are living under occupation. They’re not caring for them. They’re not doing what is their required obligation to do for them and so Palestinians are suffering. They have no income. They have no money. The authority doesn’t have money. They don’t have the physical capability of getting the vaccine and being able to store it and distribute it. And that is the obligation of the occupying power to do.

Here’s the interesting thing. Israel claims that it’s not the occupying authority, that the West Bank is under the control, that Area A, is under control of the Palestinian Authority. But they [Palestinians] can’t import. They can’t import medicines. They can’t import products unless Israel approves them and they have not given the approval for this [Russian] vaccine.

At no point does Mohyeldin make clear that the bilateral Oslo Accords, to which the Palestinians consented, transferred responsibility for healthcare to the newly formed Palestinian government. The 1995 Interim Accords state (Annex III, Article 17):

Regarding the anticipated four million doses of Russian vaccines that the Palestinian Authority hopes to import in the coming weeks, Zogby is uninformed. He erroneously speculates:

The problem is not just only getting the vaccine in. But if this vaccine is anything like the Pfizer one and requires sub-zero storage really quite frigid cold [inaudible] -94 degrees I guess there’s no capability in the West Bank and certainly none in Gaza to deal with that. So these people are literally victims, double victims of one, the plague, of the pandemic, and the other the plague of the occupation and an authority that doesn’t give a hoot about their lives.

While the Pfizer vaccine must be stored at -70 degrees (C), the Russian vaccine in its liquid form must be stored at -18 degrees (C), making it a feasible option for the Palestinians. Moreover, Zogby and Moyeldin ignore the fact that 20 percent of the Palestinian population is due to receive with no expense to the Palestinian Authority, thanks to the United Nations run Covax program for low-income nations. But acknowledgment of the Covax vaccines, along with an accurate depiction of the viability of the Russian option, does not serve Zogby’s propagandistic picture of Palestinian “double victims.”

Moyeldin then pivots to Christmas, asking Zogby to comment on “the plight of Palestinians Christians in the holy city of Bethlehem. It is unlike anything in the modern era and we know that the city has seen a lot in the last couple of years.”

Now there is tourism that is going on but the problem with tourism is that they come on Israeli tour buses and they stay one day and they leave. They don’t stay in Palestinian hotels. They bring sometimes boxed lunches and they eat. They don’t frequent the Palestinian restaurants. And they don’t stay and meet Palestinians directly. They’re under kind of an Israeli umbrella as they go in and go out. So the character of Bethlehem has changed. It’s largely dependent on tourism but it’s tourism that they don’t always control and that is a difficulty.

In fact, as has been widely reported, what the city has seen in the last couple of years is unprecedented, with capacity hotel bookings and investment in the building of more hotels. As reported in 2018 on NBC News’ site (“Biblical city of Bethlehem boasts largest Christmas in years“):

Palestinian Tourism Minister Rula Maaya said all Bethlehem hotels were fully booked, and the city was preparing to host an “astounding” 10,000 tourists overnight.

“We haven’t seen numbers like this in years,” she said, adding that the 3 million visitors to Bethlehem this year exceeded last year’s count by hundreds of thousands.

As the Christmas decorations go up in Manger Square, Bethlehem is preparing for its best Christmas for two decades, the town’s mayor and hoteliers say.

Five new hotels are in the pipeline and existing ones are expanding. The town has even extended the opening hours of the Church of the Nativity, revered by Christians worldwide as the place of Jesus’ birth. …

“Since three years (ago), things are going up, this year is better than 2018 and 2018 was better than 2017 and it is a continuous increase in the number of tourists who are coming to the city,” Salman told Reuters.

The main bottleneck, he said, was the tiny front door of the Nativity church, through which pilgrims must crouch to enter. …

The manager of the Alexander Hotel in Bethlehem, Joey Canavati, said his family had nearly given up on the town during the lean years, but now had bookings through to 2021. The hotel plans to nearly double in size from 58 to 110 rooms.

“Business has been booming, we have never seen it like this ever before,” he said. “(With) the number of tourists that have been coming in this year we have a huge lack of rooms here in Bethlehem.”

In 2017, the small boutique Walled Off Hotel, featuring Banksy’s artwork showcasing the nearby Israeli separation barrier, opened its doors and was booked solid for months, drawing tourists who arrive on tour buses. The New York Times reported at the time:

Some 700 people visit a day, the owner says, 200 of them Palestinian. Many arrive on tour buses passing through checkpoints.

The fact that participants on bus tours passing through Israeli checkpoints were visiting the Walled Off Hotel (prior to the pandemic) belies Zogby’s claim that tourists arriving by bus from Israel do not have any opportunity to explore the city. Interestingly, The Times report suggests that the hotel’s “oppression tourism” which is affecting the character of the city, stating:

Ibrahim Abdel Rahman, 32, the owner of a tire shop down the street, said he had been ordered to shut down as the area spruced up. “There is something strange about that hotel,” he said. “It’s more of a project of encouraging normalization of the occupation.”

“Silent, suffering night and no one in the world is paying attention,” Zogby concludes his unchallenged litany of falsehoods on the major American television network, a kind of broadcast news version of the Walled Off Hotel art which has tapped into the vilification of Israel to garner capacity bookings and enthusiastic international attention.
See also “AP Falsely Casts Israel As Responsible For Providing Palestinians With Vaccines”