“It didn’t take long for Israel’s most controversial new cabinet minister to touch off international reaction with a visit to Jerusalem’s most sensitive religious site,” says NPR’s introduction to Daniel Estrin’s Jan. 3 broadcast on Minister of National Security Itamar Ben-Gvir’s early morning 13-minute stroll on the Temple Mount, Judaism’s most sacred site and the third holiest site in Islam (“Criticism has followed Israel’s new security minister’s visit to Jerusalem site“). Nor did it take long for NPR to trip up on basic facts about this and other sensitive holy sites in Jerusalem.

Thus, Estrin misleadingly reported about Jerusalem’s Temple Mount: “In Jewish tradition, the hilltop that’s the mosque compound is where the biblical temples stood.” (Emphasis added).
The location of the first and second Jewish temples on the Temple Mount is not merely a question of Jewish tradition; it’s a matter of secular, scientific archeological fact.
There is no archeological dispute about the fact that the Jewish temples were located on the Temple Mount. As The New York Times was compelled to acknowledge in a 2015 correction:

An earlier version of this article misstated the question that many books and scholarly treatises have never definitively answered concerning the two ancient Jewish temples. The question is where precisely on the 37-acre Temple Mount site the temples had once stood, not whether the temples had ever existed there. 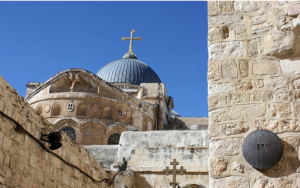 Contrary to the claim in NPR’s broadcast, Jordan does not have custodianship over Church of the Holy Sepulcher (pictured here) or any other Christian holy sites in Jerusalem (Photo by Anton Croos, CC BY-SA 4.0, via Wikimedia Commons)

The agreement regarding Jerusalem holy sites does not, in fact, deal with Christian shrines at all. It recognizes Jordan’s special role regarding only Muslim shrines, as quoted on the Jordanian government’s website, which includes the full peace agreement: (Article 9, Paragraph II): “Israel respects the present special role of the Hashemite Kingdom of Jordan in Muslim Holy shrines in Jerusalem. When negotiations on the permanent status will take place, Israel will give high priority to the Jordanian historic role in these shrines.”

Indeed, BBC Arabic recently apologized, acknowledged and corrected a similar error that referred to “King Abdullah II, custodian of Jerusalem’s Muslim and Christian holy places…” (May 10, 2021) and indirectly referred to Jerusalem’s “Muslim and Christian” holy places as one, in the context of Israeli and Jordanian approaches towards them, as though the two religions’ sanctuaries belong in the same category in both parties’ eyes (May 16), noting that “Jordan’s custodianship (or special role) in Jerusalem’s holy site… extends to Muslim sites only.”

But then, of course, NPR has a history of distorting facts to downgrade  Judaism’s claim to the Temple Mount.  (See, for example, the recent “NPR Shows Its Bias Yet Again“)

While it didn’t take NPR long to mangle the facts, it did take the publicly-funded network a bit longer to set the record straight. Though CAMERA contacted NPR last week about these errors, the media outlet has yet to correct. Stay tuned for any updates.