Anti-Israel organizations continue to make up facts. And the media continues to uncritically publish them. This time it’s NBC News.

The network’s online column, entitled “Think,” published a Jan. 15, 2020 op-ed by Jeremy Ben-Ami, the executive director of J Street and Rabbi Jill Jacobs of T’ruah (The Rabbinic Call for Human Rights). As CAMERA has reported, both organizations have a history of singling out the Jewish state for opprobrium and omitting important facts, including about the anti-Israel boycott, divestment and sanctions (BDS) movement, a movement that aims to destroy Israel (and only Israel).

Unsurprisingly, their NBC article, “Americans shouldn’t forfeit their freedom of speech so states can support Israel,” misleads about BDS.

In their column, Ben-Ami and Rabbi Jacobs claim that anti-BDS legislation violates the First Amendment by “abridging [lessening] the freedom of speech … of the people …” as well as opening “the door to much broader government control of public discourse.”

Why anti-BDS laws do not limit free speech

It is highly unlikely that anti-BDS legislation will actually result in limiting free speech. Indeed, these laws are limited to narrowly targeting commercial activity—a key fact that is obfuscated by Rabbi Jacobs and Ben Ami. Noted legal expert Prof. Eugene Kontorovich (George Mason University)  explains why anti-BDS laws are not only permissible but also just. He writes, “The state-level laws do not ban companies from boycotting Israel; they do prevent the states themselves from contracting with companies that discriminate against Israeli businesses.”

The legislation does not create potential criminal or civil liability for BDS actions. Individuals who actively avoid purchasing goods and services because of their own political viewpoint would not be punished.

War by other means: BDS tactics 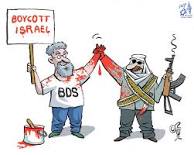 BDS is about the destruction of Israel. BDS tactics amount to another veiled anti-Jewish attack, and anyone seen as supporting Israel is a potential target.

The Center for Security Policy, a Washington D.C.-based think tank, explains the origins of the BDS movement,

In reality, Palestinian boycotts against Jews are not new. In 1945 The Arab League established a boycott of Jewish goods and services in the British controlled mandate territory of Palestine. Before the state of Israel even existed, they started this boycott. It clearly wasn’t a boycott of Israel since there was no Israel, it was simply a boycott of Jews. The declaration stated that “Products of Palestinian Jews are to be considered undesirable in Arab countries. They should be prohibited and refused as long as their production in Palestine might lead to the realization of Zionist political aims.”

This law was eventually overturned decades later in part by US anti-boycott legislation. To avoid this anti-boycott regulation, members of the Arab League commenced the 2001 UN World Conference Against Racism, Racial Discrimination, Xenophobia and Related Intolerance in Durban South Africa.

The United States and Israel withdrew their delegations from this conference within 5 days due to its overt anti-Semitic nature. Attendees stated that “Copies of the anti-Semitic work, The Protocols of the Elders of Zion, were sold on the grounds… fliers depicting Hitler with the question, “What if I had won?” circulated as well. The answer, “There would be NO Israel and NO Palestinian bloodshed.”

From this conference, the new BDS movement was truly born. The boycott was no longer against the Jewish people but against Zionists and Israeli settlers. Instead of referring to Israel as a Jewish state, it would be referred as an Apartheid state. The boycott would no longer be led by the Arab League but instead under the guise of ‘Palestinian Civil Society’. The anti-Jewish boycott created prior to the existence of Israel now had a new name; the Boycott, Divestment and Sanctions movement.

CAMERA’s Sean Durns has documented the testimony of former U.S. Treasury Department terror analyst Jonathan Schanzer who showed the links between BDS and terrorist groups like the Popular Front for the Liberation of Palestine [PFLP].

Omar Barghouti, a founder of BDS, has explained that the ultimate goal is a state where “by definition, Jews will be a minority.” Other BDS activists have expressed similar sentiments. BDS participants focus none of their attention on major human rights violators and oppressive governments such as the regime of Syrian President Bashar al-Assad, which has killed tens of thousands of its own citizens in recent years. BDS is not a human rights movement. Furthermore, the BDS movement jeopardizes the existence of thousands of jobs in businesses employing West Bank Arabs. So while Arabs in Israel have more legal rights and exercise them with more assurance than Arabs in any other country in the Middle East, Jews are the only target of BDS activists.

In their article, the authors warn that court approved anti-BDS laws constitute “a divisive and destructive choice between support for Israel and the commitment to the First Amendment.” This claim is far-fetched.

The authors suggest that courts will find problems with anti-BDS laws. Indeed, this is likely. But most likely, the problems will be minor and easily remedied. In this regard, the authors fail to cite a preeminent case regarding the Texas anti-BDS law. This 2017 law “prohibits all state agencies from contracting with, and certain public funds from investing in, companies that boycott Israel.” Gov. Greg Abbott stated that “We will not tolerate such actions against an important ally.” Subsequently, the law was successfully challenged.

According to a listing of a compilation of all the current anti-BDS laws (28 states) — a  problem arose with the law passed in Texas:

In April 2019, a U.S. District Judge ruled in favor of Bahia Amawi, a former speech pathologist who sued the state over the law after she was fired from her job for supporting BDS. The court found “the statute to be a viewpoint-based restriction intended not to combat discrimination on the basis of national origin, but to silence speech with which Texas disagrees.”

In response, the Texas legislature rewrote the language limiting the application of the law to companies with more than 10 full-time employees and contracts of more than $100,000 with the state. The governor signed the bill, which “primarily makes our original intent clear, which is that it was not to pertain to small contracts and individuals,” according to Texas Sen. Brandon Creighton.

The problems that may occur can be easily remedied, at least in the majority of cases, since these laws are generally designed so as not to violate freedom of speech.

Believe it or not

While asserting that they “do not support or advocate for the BDS movement,” the authors falsely equate the BDS boycotts against Israel to past successful boycotts, such as the 1965-1970 Delano Grape Strike and Boycott and the 1950s Montgomery bus boycott to fight Jim Crow laws in the South.

The authors of the screed have an axe to grind

CAMERA has documented how J Street has worked with Jewish Voice for Peace (JVP), an organization considered by the ADL to be antisemitic, to defend BDS.

Co-author Rabbi Jacobs has a history of making false statements about Israel, including about state laws aimed at thwarting unfair treatment of Israel by state institutions. For example, as CAMERA reported in 2018, “On May 18, the Washington Post ran a column in its Perspectives section by Rabbi Jill Jacobs, in which Rabbi Jacobs wrote that ‘South Carolina just passed a law deeming any criticism of Israel in the state’s public schools or universities to be anti-Semitic.’ Her citation for this proposition was to an article on the Qatari-funded Al-Jazeera website. Of course, the text of the South Carolina law in question says nothing of the sort. With respect to Israel, the definition enumerates six specific practices which are classified as anti-Semitism …”

NBC has often misreported about Israel

CAMERA has chronicled NBC’s journalistic malpractice about Israel. Accordingly, it shouldn’t be surprising that no refutation of the Ben-Ami/Jacobs false premise has been posted on the guest opinion BDS page.

Will the network continue to stonewall? Stay tuned here.