Following correspondence between CAMERA and The Times and the submission of many letters from readers, The New York Times yesterday posted a new story that includes the full text of Rashida Tlaib’s controversial Twitter post, which was seen as evoking the “dual loyalty” charge often leveled against Jews. The new article explores in much greater detail the various controversies plaguing Tlaib and other new US Representatives, and includes the text and an image of the Representative’s Twitter post. It also includes a more extensive description of the BDS movement. Although it is not perfect, it addresses the concerns raised below — though ethical journalism would still require the earlier article be corrected.

In an article today about Senate legislation opposing anti-Israel BDS (boycott, divest, sanctions) efforts, The New York Times covered up a tweet by Rep. Rashida Tlaib which had raised a firestorm earlier this month and was widely condemned as antisemitic ("Senate Advances Pro-Israel Bill as G.O.P. Looks for Democratic Divisions"). About legislators who backed an anti-BDS bill, Tlaib had employed the antisemitic "dual loyalty" charge, tweeting on Jan. 7:

They forgot what country they represent. This is the U.S. where boycotting is a right & part of our historical fight for freedom & equality. Maybe a refresher on our U.S. Constitution is in order, then get back to opening up our government instead of taking our rights away. 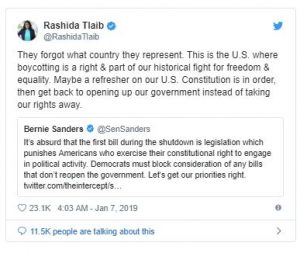 Dropping the "[t]hey forgot what country they represent" part of the tweet, Catie Edmondson reported today (page A15):

Ms. Tlaib took a swing at anti-B.D.S. legislation this month, writing on Twitter that "this is the U.S. where boycotting is a right & part of our historical fight for freedom & equality." Mr. Rubio fired back, "This 'dual loyalty' canard is a typical anti-Semitic line." The movement "isn't about freedom & equality, it's about destroying #israel."

The Anti-Defamation League released a statement in response to Tlaib’s tweet: “Representative Tlaib's tweet regarding the pending bill on the Senate floor has been interpreted by some as suggesting that Jews or Members of Congress, such as the sponsors of the bill, are more loyal to Israel than to their own country,” the organization said. “Whether or not this was her intent, this type of language is deeply problematic."

The statement also noted that, “historically, the allegation of mixed loyalty or dual loyalty has been leveled as a smear against many kinds of Americans – including against Americans of Japanese descent during World War II. Though the legislation discussed is sponsored by four non-Jewish Senators, any charge of dual loyalty has special sensitivity and resonance for Jews, particularly in an environment of rising anti-Semitism."

The Jewish Democratic Council of America also denounced Tlaib, writing in a tweet: “We oppose your charge of dual loyalty. It's wrong, dangerous, and hurts the cause of peace. Whether one supports a particular bill or not, it's offensive to insinuate that senators would be driven by anything other than the best interests of the U.S.”

The Working Definition of Antisemitism of the International Holocaust Remembrance Alliance, adopted by numerous countries, includes the following as an example of antisemitism:

According to Lexis-Nexis searches, The New York Times' print edition has never covered Tlaib's "They forgot what country they represent" remark. Searches on The Times' web site also did not turn up any articles, not even a wire service story. Thus, while today's article, which cuts out Tlaib's "dual loyalty" slur from the tweet, is particularly galling, it is a continuation of The Times' turning a blind eye to the congresswoman's antisemitic remark.

The Times' cover up today of Tlaib's antisemitic comment comes just one month after the paper was widely slammed for having published an interview with Alice Walker in which the Pulitzer Prize author recommended an antisemitic book by British conspiracy theorist David Icke. About the book, And The Truth Shall Set You Free, Richard Cohen of The Washington Post stated:

The book is so repellently anti-Semitic that Icke’s usual publisher wouldn’t touch it. Among other things, it endorses that hoary anti-Semitic forgery “The Protocols of the Elders of Zion,” which blames evil Jews for much of the world’s ills. The book also suggests that schools ought to balance lessons on the Holocaust with some questioning whether it ever even happened, and it reveals that the world is run by a cabal of giant, shape-shifting lizards, many of whom just happen to be Jewish.

But in the "By the Book" feature with Walker, The Times never reveals that her recommended reading is an antisemitic tract.

In a separate cover up in today's article, Edmonston and contributing reporter Nicholas Fandos whitewash the goals of the BDS movement, saying only that it "seeks to pressure Israel into ending the occupation of the West Bank."

In fact, as explained by Omar Barghouti, a founder of the BDS movement, in The New York Times itself:

Regarding your editorial opposing Israel’s latest anti-boycott law, the goal of the global Palestinian-led B.D.S. movement (boycott, divestment and sanctions) is not only to end the “occupation of the West Bank” (“Israel Says Dissenters Are Unwelcome,” March 9).

Since its inception in 2005 by the largest Palestinian grass-roots civil society coalition, B.D.S. has consistently called for ending Israel’s occupation of Gaza and the West Bank, including East Jerusalem; granting full equality for Palestinian citizens of Israel, who are discriminated against by dozens of laws; and recognizing the United Nations-stipulated right of Palestinian refugees to return to lands from which they were forcibly displaced during Israel’s establishment in 1948.

The implementation of the so-called "right of return" in which tens of thousands of 1948 refugees and their millions of descendants would flood Israel is widely understood to mean the end of the Jewish state. On numerous past occasions, the paper has concealed BDS' goal to advocate for bringing millions of Palestinians into Israel, thereby spelling the end of the Jewish state.