When you don’t know what you’re talking about, sometimes it’s better to leave well enough alone. Especially if you’re the editor of a major news publication. Newsweek’s muddled correction of an erroneous correction about a non-existent historic Palestinian state is a case in point. Confused yet? You should be.

The convoluted tale begins with an accurate statement which appeared in a Nov. 29 Newsweek article by Donica Phifer (“Who is Marc Lamont Hill? CNN Commentator Defends Comments on Palestine After United Nations Speech“). Originally, the text had correctly stated:

However, Hill’s statement about a “historic Palestine” appears to be inaccurate as no Palestinian state has ever existed.

All was in order, until an editor saw fit to “correct” this accurate statement by deleting it and appending the following completely erroneous “correction”:

Updated 11/30 12:14 a.m.: This story has been updated to remove information that includes an error that says no Palestinian state has ever existed. 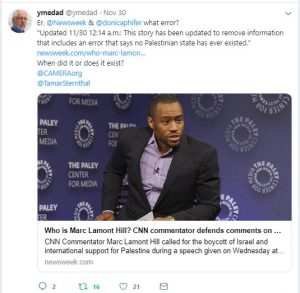 CAMERA subsequently contacted Newsweek to request a correction of the “correction,” noting that never before has there been a Palestinian state. CAMERA asked Newsweek to explain when, according to the editors’ belief, this state allegedly existed, and to identify its heads of state, its currency or its orders.

Newsweek then once again updated the story, replacing the previous update with this moderately improved though still imprecise and confused statement:

Updated 12/3 3:50 a.m.: This story’s previous reference to “historic Palestine” has been deleted; the legal and historical status of a Palestinian state remains a subject of controversy and debate.

On the positive end, the “correction,” which perhaps may carry even more authority than the original text, on the assumption that editors thoroughly checked facts out before issuing a correction, no longer misinforms readers that there has once been a Palestinian state. On the other hand, what are readers to understand from the current unclear statement that “the legal and historical status of a Palestinian state remains a subject of controversy and debate”? There is no debate, scholarly or otherwise, regarding the fact that in the past there has never been a Palestinian state.