“Have you stopped beating your wife?”

It’s the classic example used to illustrate how a loaded question can be an insidious rhetorical technique. Baked into this particular loaded question is the assumption that the person being queried had been guilty of domestic abuse.

The New York Times offers its own version of a loaded question in a set of interviews with Democratic presidential candidates that the paper published and publicized today.

We tracked down the 2020 Democratic presidential candidates and asked them the same set of 18 questions.

21 of them sat down with us on camera and gave us their thoughts on topics ranging from the political to the personal.https://t.co/IkNeyd8IpO

On its own, the newspaper’s prompt about Israel doesn’t explicitly assume guilt. Candidates were asked, “Do you think Israel meets international standards of human rights?”

Yes, it is curious that Israel is the one foreign country whose policies were deemed worthy of scrutiny in the 18 questions posed by the New York Times. The moral records of Afghanistan, the largest recipient of U.S. foreign assistance funding; China, America’s largest trading partner; and Mexico, the country’s southern neighbor were unquestioned. There was nothing about Egypt, whose former president just died in a courtroom while on trial; Saudi Arabia, the top purchaser of U.S. arms; Turkey, our putative NATO ally; or the Palestinians. Only Israel. 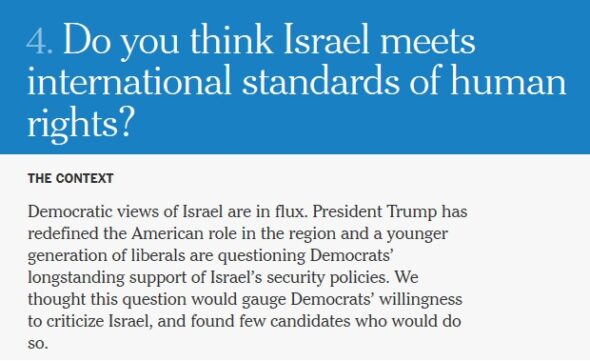 Still, the wording of the question itself isn’t loaded. It is more “Do you beat your partner?” than “When did you stop beating them?”

On the other hand, note the loaded “context” offered by the paper:

Democratic views of Israel are in flux. President Trump has redefined the American role in the region and a younger generation of liberals are questioning Democrats’ longstanding support of Israel’s security policies. We thought this question would gauge Democrats’ willingness to criticize Israel, and found few candidates who would do so.

Here, the newspaper holds the answer to its question — and holds Israel’s guilt — as self-evident. Only if Israel is guilty does this yes-or-no question gauge whether the Democratic candidates are “willing to criticize” Israel, as opposed to gauging their genuine beliefs about the country.

In the New York Times’s framing, no answer to the question about Israel’s human rights record exculpates the Jewish state. No means no — Israel doesn’t meet international standards, and candidates are willing to say so. But yes also means no. Israel is guilty, but cowardly Democrats are simply “unwilling” to criticize the country.

As it turns out, many of the Democratic candidates described Israel as one of America’s closest friends and underscored the country’s need for security, even if some indicated their disapproval of the current government. The advocacy journalists at the New York Times were clearly disappointed.