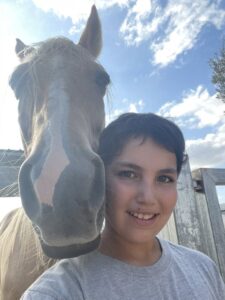 A young Israeli child alongside an Israeli horse. Are both ripe targets for BDS? (Illustrative image by E. Sternthal)

A 13-year-old Israeli girl seeking assistance on a school project wrote a letter to a former Cambridge professor with questions about horses. The academic responded: “I support Boycott, Divestment, Sanctions. You might be a child, but if you are old enough to write to me, you are old enough to learn about Israeli history and how it has impacted on the lives of Palestinian people.” She added: “the Jews have become Nazis.”

An actual BDS episode or a satirical take on the anti-Israel boycott, divest, sanctions movement? (The solution to today’s quiz is at the bottom of the post.)

In the smoke and mirrors propping up the factually and morally bankrupt BDS, the anti-Israel movement’s real stances are virtually indistinguishable from satire.

Thus, according to the Palestinian Campaign for the Academic and Cultural Boycott of Israel‘s (PACBI) looking-glass reality, a 2012 cancellation of an Israel trip planned for actors Bruce Willis and Jean Claude Van Damme was cause for celebration, touted as a BDS victory. In fact, family tragedy was behind the cancellation: “Expendables II” co-star Sylvester Stallone lost his son in an untimely death, necessitating the trip’s cancellation.

PACBI pulled the same pathetic stunt a year later, applauding Lenny Kravitz’s cancellation of his Israel trip due to “respect” for the BDS call. Back on planet earth, the filming for his movie “The Butler” was extended, prompting cancellation of his trips to Israel, Russia, Ukraine, Finland, Serbia, Romania, Bulgaria, and more.

More recently, the same PACBI saluted “Miss Greece” Rafaela Plastira’s decision to renounce her Miss Greece crown out of solidarity with the anti-Israel BDS (boycott, divest, sanctions) movement, bowing out of last year’s Miss Universe pageant in Eilat, Israel. According to Miss Plastira, however, along with the Miss Universe Organization, Ms. Plastira was not in fact Miss Greece and was never scheduled to attend the competition in Israel.

And so on and so forth.

BDS’ biggest deception is that it embodies decency and champions human rights. In fact, it epitomizes demonization and bigotry. It endorses the elimination of the Jewish state, an inevitable human rights catastrophe for millions of Israeli Jews. Advocating as it does for the so-called Palestinian “right of return,” BDS envisions a Middle East with no Israel within any borders. As BDS co-founder Omar Barghouti has himself acknowledged, “a return for refugees would end Israel’s existence as a Jewish state.”

Despite the well documented record of BDS falsehoods and moral bankruptcy, The New York Times has lost itself in the BDS rabbit hole on numerous occasion. The “Paper of Record” has, for instance, on numerous occasions falsely dressed up the movement which seeks Israel’s destruction as merely “critical of Israel’s policies toward the West Bank,” has disguised it as an “international group that advocates Israel’s withdrawal from disputed territories where Palestinians live,” and has prettified it as a “movement that presses Israel to end the occupation of the West Bank.”

Despite two 2019 CAMERA-prompted Times corrections (here and here) regarding BDS’ real goals — (the movement is not merely anti-occupation, its supporters oppose Israel’s existence and its critics consider it antisemitic) — the Grey Lady’s long journey through BDS’s maze of lies took a new twist last week. Chris Colin’s May 9 business story about fashion activist Hoda Katebi includes BDS among socially-conscious fashion industry-related social causes, or “systemic issues stitched into fashion,” such as exploitive sweatshops and unsustainable manufacturing (“Taking on Fast Fashion By Taking It Down“)

Katebi explains in the article:

I discovered fashion blogs just before college. It was a fun outlet. But some of my favorite people were working with brands on the BDS list, [a list of companies and individuals that support Israel]. They weren’t thinking about the politics behind the aesthetics. When I created my first website, it was to push people to think about their clothes in a more complex and nuanced way.

And just like that, The New York Times uncritically conveys the activist’s assertion that a bigoted movement dedicated to the elimination of the Jewish state is a social justice cause par excellence.

The paper’s uncritical inclusion of Katebi’s admiration for the antisemitic BDS movement as a supposedly social justice value recalls the Times‘ previous scandalous profile of Alice Walker. In that 2018 profile, Walker, who has her own troubling history of expressing virulent antisemitic sentiments, gave glowing praise for racist conspiracy theorist David Icke and his rabidly antisemitic book, stating: “In Icke’s books there is the whole of existence, on this planet and several others, to think about. A curious person’s dream come true.”

Ironically, and in a twist exposing the depth of BDS’ detachment from facts and morality — a disconnect making it virtually indistinguishable from its parody — The Times initially provided a hyperlink to a satirical anti-BDS site poking fun at the anti-Israel movement. The Times apparently mistook the parody site for the real deal. Admittedly, this researcher quickly glanced at the spoof site and also failed to detect the satire given that the actual BDS movement rivals its parody on the absurdity count.

Virtuous BDSer Hoda Katebi alerted The Times to the mix up, and editors dutifully replaced the parody site link with a link to PACBI’s very similar site. (In a significant tip off, the satire site includes links to CAMERA. PACBI’s real site does not.)

Solution to today’s quiz on the Israeli school girl and her equine questions:

That actually happened. In 2015, Dr. Marsha Levine, an expert on the history of domesticating horses who spent 10 years at Cambridge’s McDonald Institute for Archaeological Research, said of her decision to boycott 13-year-old Israeli Shachar Rabinovitz:

I made the decision that I have the choice not to waste my time on people who tread on the rights of other people. I didn’t do anything to her. I said that when there is justice for Palestine I will answer her – that’s a fair answer. I’m a signatory to Jews for Justice for Palestinians and I sent her a link. I did it as a matter of conscience. The way Israel treats Palestinians is totally disgusting.

She added: “Jews have turned themselves into monsters.”

For her part, little Rabinovitz was guilty of sending Levine the following message:

In the name of social justice in fashion, surely Katebi must instruct PACBI to include Rabinovitch, along with all her classmates, younger siblings, and all horses she rides to the organization’s BDS target list.