The New York Times has long history of whitewashing the extremism of the BDS movement.

BDS stands for “boycotts, divestment, and sanctions,” and the BDS campaign seeks to leverage those tools to eliminate Israel and replace it with an Arab-majority state.

Although BDS leaders openly acknowledge they seek to disenfranchise Jews by eliminating the country’s Jewish majority — BDS co-founder Omar Barghouti has admitted his goal is “a unitary state where, by definition, Jews will be a minority” — the Times has consistently downplayed the movement’s goals by reporting, for example, that BDS merely “seeks to pressure Israel into ending the occupation of the West Bank,” or that the its activists are simply “critical of Israel’s policies toward the West Bank.”

Language of this type had prompted Tablet’s Yair Rosenberg to charge the paper with having “dramatically misrepresented [BDS’s] stated aims and implicit goals, whitewashing the movement’s radicalism.”

Days after the U.S. House of Representatives delivered an overwhelming, bipartisan rebuke to BDS with a 398-17 vote explicitly opposing “the Global Boycott, Divestment, and Sanctions Movement,” the New York Times jumped in with a piece titled “Is B.D.S. Anti-Semitic? A Closer Look at the Boycott Israel Campaign.”

The piece purports to provide “answers to some of the most difficult questions” about BDS. And this time, the paper did manage to acknowledge that the campaign opposes the existence of the Jewish state, an improvement over earlier coverage that falsely cast the Boycott, Divestment, Sanctions movement as merely anti-occupation. In that respect, at least, it is a needed improvement. Still, the article relies on distortions and omissions to make BDS extremism more palatable to readers.

Throughout the piece, reporters David Halbfinger, Michael Wines, and Steven Erlanger put their fingers on the scales in support of BDS, including by:

Although the article goes back and forth between summarizing the purported views of “B.D.S. leaders” and the movement’s “critics,” only five words in the entire 2000-plus word piece directly quote anyone criticizing BDS. By contrast, Omar Barghouti, a veteran anti-Israel activist and top BDS official, is quoted at length in the story.

And so, remarkably for an article that purports to asks whether BDS is antisemitic, the reporters manage to avoid quoting prominent voices that answer the question in the affirmative.

There is nothing from the ADL, the largest American organization dedicated to combating antisemitism, whose CEO Jonathan Greenblatt recently stated, “The founding goals of the BDS movement, and many of the strategies employed in BDS campaigns, are fundamentally anti-Semitic.” 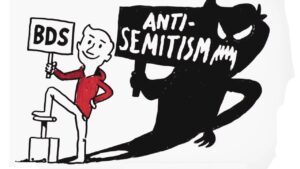 An image from a video about BDS by former UK chief rabbi Jonathan Sacks.

There is nothing from David Harris, the head of the American Jewish Committee, who has asked rhetorically: “If the Boycott, Divestment and Sanctions (B.D.S.) movement isn’t another form of anti-Semitism, what is?”

(Instead, the reporters turn to a former AJC official, Kenneth Stern, who publicly disagrees with legislation to combat BDS, and who in the article appears to suggest opponents of BDS are guilty of bigotry. Stern has previously stated that he opposes BDS, but there no hint of such opposition in the Times story.)

There is nothing from the Conference of Presidents of Major Jewish Organizations, which argues that “the BDS movement at its core is anti-Semitic as has been amply demonstrated.”

There is nothing from AMCHA, a group that combats antisemitism on campus, which has explained why in its view “the BDS movement is antisemitic.”

And there is nothing from J Street, a harsh critic of Israel that nonetheless has granted that “some of the Movement’s supporters and leaders have trafficked in unacceptable anti-Semitic rhetoric.”

Although the New York Times reporters refer to Europe, where they say there is less political pushback to BDS, they avoid mentioning that Germany’s parliament recently passed a bill condemning BDS as antisemitic and stating that the campaign’s practices “recall the most terrible phase of German history.”

Meanwhile, the reporters further downplay concern about to BDS by claiming only that “many Israelis” say the movement’s goal is the elimination of the Jewish state — as if many non-Israelis don’t say the same. (See above.)

By contrast, the article inflates support for BDS with unsubstantiated and misleading assertions. The reporters claim, for example, that BDS appeals to “a significant number of politically liberal Jews,” but offer no support for their assertion. The mainstream, liberal Jewish community as exemplified by, for example, Jewish Community Relations Councils across America has overwhelmingly deemed pro-BDS positions a red line not to be crossed by constituent members. Thus, a pro-BDS position is hardly the view of  the majority of “liberal Jews” but is rather confined to radical fringe groups such as Jewish Voice for Peace. According to a recent survey, only 3 percent of American Jews view themselves as “not pro-Israel,” while an overwhelming majority of American Jews are pro-Israel and, unlike BDS, support its right to exist.)

Elsewhere, again, the reporters groundlessly insist BDS has “significant support, and may be gaining ground.”

Their evidence? In the words of the reporters, “A survey released in February suggested that one in five Americans approved of B.D.S. as a way of opposing Israeli policy toward Palestinians. A December 2018 University of Maryland poll of a much larger sample put support at 40 percent.”

The passage is worth a closer look. The poll that suggests 20 percent support is the more recent poll, while the one suggesting 40 percent support is the earlier one. The reporters, though, mention them in reverse chronological order, shrouding the sharp numerical drop that is incompatible with their claim of a movement that is “gaining ground.”

And look closer still: Rasmussen, which conducted the 2019 poll, described its own finding as follows: “Voters Show Little Enthusiasm for Boycotting Israel.” The Times reporters took a finding of “little enthusiasm” and rewrote it as “significant support.”

Moreover, there is no indication either poll informed respondents about the organized BDS movement’s radical goals of demographically overwhelming Israel and gerrymandering away its Jewish majority. On the contrary, the pollster behind the “40 percent” finding indirectly acknowledged that the his poll suffers from a type of “double barreling” — that’s when one poll question asks two potentially different things, leading to unhelpful results — when he admitted that ”most Americans have probably never heard of the Boycott, Divestment, Sanctions (BDS) movement….”

If they haven’t heard of the movement, and if the polls don’t describe the movement, then the findings don’t actually show support for the extremist BDS movement which the Times article discusses.

Ignoring antisemitism and its definition

Early in the piece, the reporters point to international support for BDS by pointing to “its adherents prominent in the British Labour Party.” Incredibly, though, they say nothing about the antisemitism scandal that has roiled the party and led to mass resignations, high profile suspensions, a damning exposé on BBC, and a beleaguered Jewish community.

There is perhaps no more prominent example of how anti-Israelism and antisemitism are intertwined within the purportedly anti-racist far left. Despite this — or maybe because of it — the article references support within Labour as nothing more than as a sign of the BDS campaign’s popularity.

The reporters also ignore a widely used definition of antisemitism, which helps answer the article’s central question about BDS antisemitism. The International Holocaust Remembrance Alliance definition, which has been accepted by the US, UK, Ireland, Canada, Germany, France, Sweden and 25 other countries, lists several “contemporary examples of antisemitism in public life.” One such example: “Denying the Jewish people their right to self-determination, e.g., by claiming that the existence of a State of Israel is a racist endeavor.”

It is, as popular blogger Elder of Ziyon notes, “the closest thing there is to a universal definition of antisemitism.” Inexcusably, though, it is unmentioned in a Times article asking whether BDS is antisemitic. Is that because the IHRA definition points to the “wrong” answer, in the view of the reporters?

The article takes sides in other ways, too. When referring to the BDS demand that Israel dismantle its security barrier, for example, the reporters make a point of stating that the barrier “divid[es] many Palestinian neighborhoods.” They say nothing about the Israeli view of the barrier: That it was built during a wave of Palestinian violence targeting Israeli civilians, in order to help prevent suicide bombers from entering Israel.

Why conceal that part of the story? Perhaps because hiding the murder campaign makes it easier to convince readers, a few sentences later, that this and other BDS demands “sound innocuous enough.”

Indeed, perhaps the worst sin by Halbfinger, Wines and Erlanger is making the elimination of Israel seem “innocuous.” Again and again, they pass the microphone to Barghouti, the advocate for a country where Jews are “by definition” a minority, so that he can pretend eliminating Israel is a noble aim. They quote Barghouti charging Israel with “racist and exclusionary” laws, “colonialism and apartheid,” and “racial discrimination.”

They leave no room for rebuttal to these inflammatory charges. Not from Israel. Not from mainstream Jews. And not from others who have argued that anti-Zionism of the type promoted by Barghouti is antisemitic — for example, President Obama, Pope Francis, Manuel Vals, and David Cameron.

… Kenneth Stern, director of Bard College’s Center for the Study of Hate, urges a distinction between effect and motivation: Palestinians who feel no ill will toward Jews but yearn for self-determination in the land of their forebears may rightly argue that to disparage that yearning is a form of bigotry.

But just one paragraph later, opposition to Jewish self-determination in their ancestral homeland is cast as anti-racist, not bigoted: “Is B.D.S. Anti-Zionist?” the reporters ask. “Yes, loudly and proudly. Its founding documents explicitly reject Zionism – the belief in self-determination for the Jewish people in the biblical land of Israel – calling it the ‘ideological pillar of Israel’s regime of occupation, settler colonialism and apartheid.’”

The article describes the cancellation of an international soccer match between Argentina and Israel scheduled to take place in Jerusalem as a “public-relations victory” for BDS. But as even the New York Times reported at the time, “officials with the Argentine Football Association said threats had been made against Lionel Messi, the star of Argentina’s national team, and other members of the team.”

The soccer players would hardly be the first ones threatened, bullied, or harassed by BDS activists. Paul McCartney was the target of death threats. Radiohead frontman Thom Yorke slammed BDS activists and charged them with “throw[ing] shit at us in public.” Novelist Umberto Eco described their ideas as “absolutely crazy” and “fundamentally racist.” Irish writer Gerard Donovan said BDS activists tried to bully and cajole him, describing it as “outright intimidation.” The band Dervish described an “avalanche of negativity,” “venom” and “hatred” coming from BDS. The manager of Jazz musician Jack Terrasson described being on the receiving end of BDS’s “intellectually dishonest” and “pathological hatred.” And Malian singer Salif Keita charged BDS with trafficking in “blackmail attempts, intimidation, social media harassment, and slander.”

BDS activists don’t only target Israel and performers who seek to travel there. In the case of the musician Matisyahu, they’ve also targeted non-Israeli Jews playing in non-Israeli venues. (In other words, Jews.) And BDS-aligned activists have agitated for South African Jews to be removed from the country’s universities, or even from the country itself.

If the BDS movement’s few successes were “public-relations victories,” as the Times put it, perhaps it is only because they have people in the media who serve as good PR agents. The New York Times reporters might want to consider how they fit in to this.