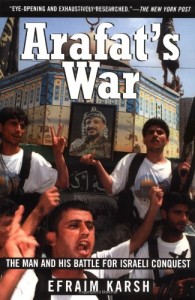 A riveting and invaluable new book, “Arafat’s War” by Efraim Karsh, offers the first comprehensive account of Palestinian policy through the Oslo years. Karsh tracks Arafat’s ongoing commitment to Israel’s annihilation and establishment of a Muslim Arab state in all of “Palestine,” an agenda clearly discernible in the PA’s continued promotion of the “plan of phases” for Israel’s destruction, the preparation for a war of terror, the persistent demand for the Palestinian “right of return” and adherence to the other elements of longstanding Palestinian strategy in pursuit of Israel’s demise.

Karsh likewise charts Arafat’s lifelong record of violence and murder. From his first shooting to death of an innocent young Arab at the age of 20, to his personal instructions to Palestinian terrorists to execute American diplomats in Khartoum, to the decades of terror against Israeli schoolchildren and citizens, to the slaughter in Munich, to the violence launched in 2000, he has left a trail of death and destruction.

Nevertheless, however bloodstained the Palestinian leader’s past record and however egregious his violations of the landmark Oslo peace effort — from the day the documents were signed — most of the mass media ignored his conduct, particularly incendiary and irredentist statements made in Arabic. Most focused instead on Israel’s actions, accepting at face value Arafat’s protestations of victimhood made to the West, and urging concessions and accommodation by the Jewish state.

Professor Karsh, head of the Mediterranean Studies Department at Kings College, London, does readers a service in recording, in spirited and readable style, the facts about events during the Oslo years. The book is an excellent resource for anyone interested in Middle East politics and events.