Continuing a longstanding tradition, Reuters Arabic’s coverage this month of the annual “conditions of the Palestinian people” report released by the Palestinian Central Bureau of Statistics reads more like a press release for the Palestinian agency than a news report by an independent international news agency. 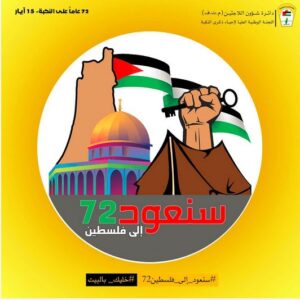 The Palestinian Authority’s PCBS publishes its report every year in anticipation of Nakba Day on May 15, the date that Palestinians mark as the “catastrophe” of Israel’s founding.

But the annual affair is of dubious newsworthiness. Indeed, the journalistic value of Reuters’ consistent coverage of the annual PCBS report, year after year, is highly questionable at best (2019, 2018, 2017, 2016, 2015, 2014 and 2013). Only two figures in Reuters’ 2020 coverage – those concerning the total population of Palestinians and the current number of “Palestinian refugees” – concern 2019. PCBS’s announcement also includes two 2018 figures, which Reuters had not previously reported last year. The rest of the material, which constitutes the overwhelming bulk of the report, concerns 1948 events and their aftermath. Reuters’ West Bank reporters have been covering the PCBS reports every single year since 2013 in much the same way, primarily rehashing the exact same material, in much the same language, concerning events from decades ago, and including minimal material on current data.

For instance, on a consistent basis, Reuters’ yearly article about the PCBS publication alleges, by directly quoting the unchallenged PCBS claim, that “the uprooting of 800,000 Palestinians” was carried out “from their villages and cities, out of 1.4 million Palestinians who, in 1948, resided across historical Palestine in 1300 Palestinian villages and towns.” Nearly identical quote and figures appear in Reuters’ 2020, 2019, 2018, 2016 and 2015 reports.

Recycled over many years are also the claims that “The process of this [ethnic] cleansing was accompanied with the Zionist gangs perpetrating more than 70 massacres against the Palestinians, creating more than 15,000 martyrs,” and that “During the Nakba phase, the Israeli occupation took control over 774 Palestinian villages, 534 of which were completely destroyed while the rest was subjugated to the occupying entity and its laws.” Both claims appear in all of Reuters’s coverage from 2013 to 2020 with the exception of 2018.

The copy-paste “reporting” is also apparent as the annual Reuters article repeats nearly identical data just about every year about the current location of Palestinian refugees: 28.4 percent of the Palestinian refugees live in 58 official camps belonging to UNRWA, which divide into 10 camps in Jordan, nine in Syria, 12 in Lebanon, 19 in the West Bank and eight in the Gaza Strip.

Moreover, as in previous years, Reuters’ story by Ali Sawafta in Ramallah, consists primarily of direct quotes and paraphrases from the PCBS release. Sawafta’s parroting of the Palestinian Authority narrative and language is striking, as he freely quotes terminology lifted from the glossary of Arab nationalist propaganda — “martyrs,” “Zionist gangs,” and “the entity of occupation.”

Beyond the terminology, Sawafta fails to challenge or qualify PCBS’ specious claims about 1948 events. Nor does Reuters   examine what PCBS chooses to conceal.

Reuters’ lengthy, detailed press release-style coverage of the Palestinian report stands in striking contrast to Reuters Arabic’s brief, matter of fact article this year on the population report issued by Egypt’s Bureau of Statistics. The concise report on Egypt contained none of the excessive quotations and laborious repetitions which consistently characterize the parallel report on the Palestinians. The entirety of Reuters’ two paragraph article on the most populous Arab country follows:

The Central Bureau of Public Mobilization and Statistics in Egypt said the number of the country’s residents in the interior reached 100 million people on Tuesday. This places burden on the government, given the threat the sizeable demographic growth can pose to its plans for economic reform.

The population clock, which is located on the top of the building of the Central Bureau of Public Mobilization and Statistics in Northeast Cairo, reached the record of 100 million, as did the ticker on the Bureau’s website.

(Previously, Reuters covered demographic data from the Egyptian Bureau in 2014, in an article slightly longer than this year’s.)

Interestingly, in addition to Reuters, there is a second Western-branded Arabic media outlet which amplified the PCBS Nakba Day announcements. Emirati-influenced Sky News Arabia published five unattributed reports that are almost identical to those by Reuters, and on the same dates (2020, 2017, 2016, 2015, 2013).

In conclusion, for Reuters and Sky News Arabia alike, Nakba Day reports present an annual opportunity to serve as Palestinian Authority mouthpieces, amplifying the message of eternal Palestinian victimhood. In that way, the two Western media outlets, which suspend independent judgement on the line dictated from Ramallah, are no different than Al-Hayat Al-Jadeeda, the PA’s official newspaper. It too religiously covers the unmediated PCBS announcements every single year: 2020, 2019, 2018, 2017, 2016, 2015, 2014, 2013 and even prior.

Announcement: The Number of Palestinians Grew Nine-Fold Since 1948

Ramallah (West Bank) (Reuters) – Statements by the Palestinian Bureau of Statistics revealed on Wednesday that the number of Palestinians grew nine-fold since 1948 so that by the end of 2019 it reached around 13.4 million people.

As the 72nd anniversary of the Nakba approaches, the Bureau said that “the uprooting of 800,000 Palestinians” was carried out “from their villages and cities, out of 1.4 million Palestinians who, in 1948, resided across Historical Palestine in 1300 Palestinian villages and towns.”

The announcement also read that “during the Nakba phase, the Israeli occupation took control of over 774 Palestinian villages, 534 of which were completely destroyed while the rest was subjugated to the entity of occupation and its laws.”

It added: “the process of this [ethnic] cleansing was accompanied by Zionist gangs perpetrating more than 70 massacres against the Palestinians, creating more than 15,000 martyrs.”

The announcement presented the reality of the Palestinian refugees, clarifying that their number on Wednesday [sic] was circa 5.6 million people.

It also indicated that around 28.4% of them live in 58 official [refugee] camps which belong to UNRWA, divided into 10 camps in Jordan, 9 in Syria, 12 in Lebanon, 19 in the West Bank and 8 in the Gaza strip.

Addressing the reality of settler-colonization in the West Bank, it pointed out that the number of Jewish settlers there reached 671,000 by the end of 2018.

The Bureau of Statistics stated that “the number of Israeli colonialist sites and military bases in the West Bank reached 448 by the end of 2018.”

The Palestinians and Israelis have left the issues of refugees and settler-colonization to the negotiations about a permanent settlement when signing the provisional peace accord between the PLO and Israel in 1993.

Israel refuses to allow the return of the Palestinian refugees just like it refuses to completely withdraw from the Bank. It plans to enforce its sovereignty on the settlements built there.

Palestinian president Mahmoud Abbas has threatened to abolish the agreements signed with Israel in the event of its annexation of any West Bank parts. (Translation by CAMERA Arabic.)