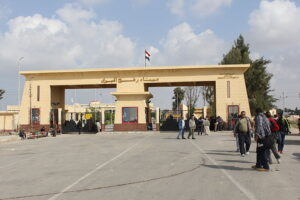 The Rafah crossing from Egypt into the Gaza Strip, 2020 (Photo by Gigi Ibrahim/Wikimedia)

Thus, the article states that parkour “provides its own sense of freedom of movement in an area locked in conflict with neighbouring Israel, which blockades the enclave, citing security concerns.”

In 2020, 25,069 people have exited the Gaza Strip via the Egyptian-controlled crossing into Egypt, according to the UN’s Office for Coordination of Humanitarian Affairs. In contrast, also this year, some 58,000 Gazans have left the territory via the Israeli-controlled Erez crossing into Israel, according to OCHA. Thus, the number of exits from the Gaza Strip via Israel is more than double the number of exits via Egypt, so why does Reuters cite the former’s much more porous blockade and not the latter’s? Moreover, all commercial and industrial imports, plus fuel, go through the Israeli-controlled go through Israel’s Kerem Shalom crossing — not via Egypt.

Reuters practice in the past has been to rightly note the more stringent Egyptian blockade alongside the Israeli blockade. See, for instance: 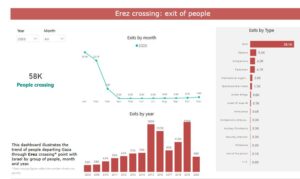 CAMERA has brought the omission to Reuters’ attention. Stay tuned for any updates.